« One Symbiont Is Good, Two Are Better: The Forever Fascinating Story of the Leaf-Cutting Ants and Their Bacteria | Main | Of Terms in Biology: Bacterial Ploidy » 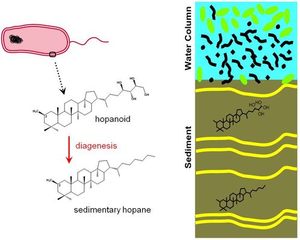 Figure 1A. The biomarker principle involves the burial and preservation of bacterial lipids such as hopanoids in the sedimentary rock over billions of years. Diagenesis describes the chemical, physical, or biological changes undergone by sediment after its initial deposition. Bacteria present in the water column die and are deposited and buried in the sediment where they undergo degradation. Hopanoid molecules lose the majority of their functional groups but the basic hopane structure is preserved over billions of years. Geochemists are then able to extract and detect these lipids in ancient sediments. Credit: Paula Welander

First Evolved! Last Extinct! This prokaryotic pride motto was coined by my undergraduate advisor (and good friend) Prof. Mark Martin. As a microbiologist, I love this motto for many reasons, but especially because it alludes to one of the underlying principles of my current research. Microbes were indeed the first to evolve and the metabolic inventions of ancient microbes greatly influenced the ancient Earth’s environment and the evolution of life. The interaction between the Earth and microbes has been recorded in sedimentary rocks that are billions of years old.

Accessing this microbial record continues to be one of the challenges of geomicrobiology. One powerful strategy for understanding the microbial signatures in the rock record is the use of “molecular fossils” or biomarkers, organic compounds that are produced by select groups of microorganisms and, amazingly, are preserved in both modern and ancient sediments. Geochemists are able to extract these molecules from very old rocks and, based on their distribution in modern organisms, link specific groups of bacteria to ancient environments (Fig. 1A+B).

As Tanja Bosak described in her earlier contribution to this blog, both eukaryotic and bacterial lipids are preserved in old rocks, thus both have the potential to be “molecular fossils.” One example of such is the use of 2-methylhopanoids as biomarkers for cyanobacteria and oxygenic photosynthesis. Hopanoids are pentacyclic triterpenoid lipids produced mainly by bacteria and that are structurally similar to eukaryotic sterols (Fig. 2). 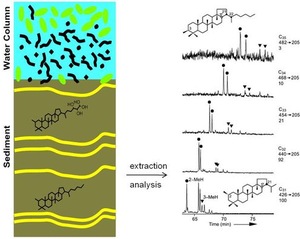 The link between cyanobacteria and 2-methylhopanoids was brought into question a few years ago when it was discovered that the anoxygenic phototroph Rhodopseudomonas palustris was capable of producing methylated hopanoids under anaerobic conditions and in quantities similar to those made by the cyanobacteria. This finding raised doubts about the previous interpretation of the origin of 2-methylhopanoids in the rock record. It is here where we, as molecular microbiologists and microbial physiologists, could make a contribution to the biomarker field by “fattening up” the slim amount of phylogenetic and physiological data available for linking hopanoids to specific bacteria and their metabolism.

Currently, our understanding of the taxonomic classification of 2-methylhopanoid producers is based on lipid analysis of cultured bacterial strains. We reasoned that a more constructive approach would be to identify a genetic factor required for the production of 2-methylhopanoids that could be used to survey the vast amount of available genomic and metagenomic data. Utilizing comparative genomics and genetic deletion analysis, we uncovered the vitamin B-12 binding radical SAM protein (HpnP) in R. palustris responsible for the methylation at the C-2 position. Only 30 bacterial strains (out of approximately 200 hopanoid producers tested) have a copy of the HpnP methylase (Fig. 3). These fall into three phylogenetic groups — the cyanobacteria, the Rhizobiales (an order of the α-proteobacteria that contains R. palustris), and the acidobacteria. Notably, not all cyanobacteria contain HpnP. We found no common thread among the bacteria with the methylase (e.g., they aren’t all phototrophs nor are all found in one type of ecosystem). Clearly just understanding the phylogenetic distribution of 2-methylhopanoid producers is not sufficient to properly “read” these biomarkers in the rock record. Rather, it would be more useful to identify the cellular function as well as the environmental factors that induce the expression of these compounds. 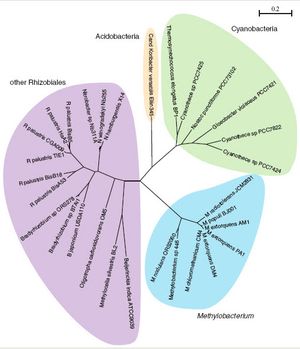 What to do? We turned once again to the anoxygenic phototroph R. palustris that produces up to six different modified hopanoids. We started out by characterizing a mutant unable to produce hopanoids methylated at the C-2 position, but we found no associated phenotype. It was clear that first we needed to step back and understand the function of hopanoids in general. We constructed an R. palustris mutant that no longer produced any hopanoids by deleting squalene hopene cyclase, an enzyme required for the initial cyclization of squalene to form the basic hopanoid structure. This mutant has similar growth characteristics to the wild type strain under all standard growth conditions including photosynthetic growth, underscoring that hopanoids do not play a role in photosynthesis — and highlighting again that hopanoids are not good biomarkers for any type of photosynthesis! However, the hopanoid deletion mutant showed a growth defect under environmental stress conditions such as high pH or high temperature. Its outer membrane became more permeable, suggesting that enhanced permeability lowers resistance to environmental stress. Interestingly, the mutant deficient in only 2-methylhopanoid synthesis grows normally under stress and its outer membrane is as impermeable as the wild type. This means that the methylation at the C-2 position has a unique and distinct purpose, separate from maintaining outer membrane integrity. Seeking some clues as to the function of these specific molecules, we have started work on the biochemistry of the methylase protein and are investigating the localization of the 2-methylhopanoids, their possible regulators, and the environmental factors that might stimulate their production.

Although we have made some progress in understanding the function of hopanoid molecules in bacterial cells, we feel we have just begun to scratch the surface. We hope that further investigations into these potentially interesting lipids will reveal novel functions that will not only inform the proper interpretation of hopanoids found in old rocks but will also spark the interest of microbiologists and cell biologists. Hopanoids have been buried for billions of years and it is time for their mysteries to be unearthed.

Welander PV, Coleman ML, Sessions AL, Summons RE, & Newman DK (2010). Identification of a methylase required for 2-methylhopanoid production and implications for the interpretation of sedimentary hopanes. Proceedings of the National Academy of Sciences of the United States of America, 107 (19), 8537-42 PMID: 20421508