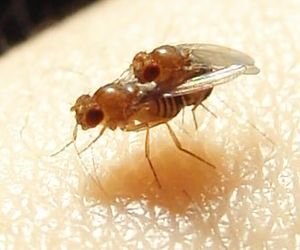 Back in 1983, researchers at Yale borrowed a microbiological tactic to study evolution at a "single gene locus" in a multicellular animal — the use of altered growth media to select for nutritional mutants. They confronted populations of Drosophila pseudoobscura with a growth medium containing either maltose or starch as the sole carbohydrate source and observed inherited changes to the α-amylase allozyme frequencies and the enzyme's location within the gut in the "starch flies." Interesting, useful, but not revolutionary.

A few years later a Yale Ph.D. student working with the same flies reported something unexpected. Looking at populations that had been reared on the maltose or starch medium for a year, she found that starch flies preferred to mate with starch flies rather than maltose flies, and likewise the maltose flies preferred maltose mates. In her paper she concluded that the new behavior was a pleiotropic by-product of the adaption to the different media.

And so the matter rested for about two decades until revisited by a group of five researchers from Israel and one from Maine, with some most intriguing — and microbial — insights. (You knew that there had to be a microbe lurking somewhere. Otherwise I wouldn’t be writing about fly mating behavior here.) In their recent PNAS paper they present evidence that the flies raised on different food sources harbor different populations of bacterial commensals, and that it’s these microbes that are the matchmakers. 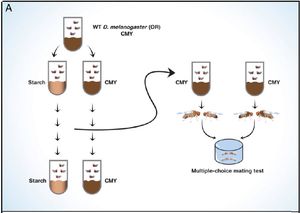 (Click to enlarge) The experimental procedure. A population of flies was divided, reared for a number of generations on either starch or CMY media, grown separately for one generation on CMY medium, and then tested for mating preference. Multiple-choice mating tests were performed in wells containing four flies: one male and one female starch-reared and one male and one female CMY-reared. Source

These researchers used an inbred lab strain of wild type D. melanogaster reared on the standard cornmeal-molasses-yeast agar medium (CMY). For their experiments, they divided the flies into two groups, one reared on CMY and the other on a starch medium for the specified number of generations. All flies were then grown for one more generation in CMY to remove any direct effects from the media itself before being tested for their mating preference. Again there were more homogamic (“like with like”) matings — the CMY flies preferring CMY flies, starch flies preferring starch flies — thus extending the earlier results to a different Drosophila species reared on a different pair of growth media

But the researchers didn't stop here. Next they tested to see how quickly the mating preferences arose after transfer to the different media. The answer was after only two generations, the earliest timepoint they tested. This almost instantaneous adaptation by a multicellular animal brought to mind an earlier observation by Eugene Rosenberg's lab (one of the authors of this Drosophila paper) when studying a coral (Oculina patagonica) found along Israel's Mediterranean coast. These corals, which had previously been bleached each summer by the pathogen Vibrio shiloi, in 2004 suddenly became resistant to infection. In a subsequent paper, Ilana Zilber-Rosenberg and Eugene Rosenberg noted that all multicellular plants and animals carry a complex microbiota that can potentially enable them to respond rapidly to changing conditions. When confronted with a new pathogen, a new herbicide, or some other environmental shift, it is the holobiont — the host plus symbionts — that is acted on by natural selection. Adaptation can result from changes to the genomes of the host or any symbiont, by the acquisition of new symbionts or by a shift in the relative abundance of existing ones.

Results for mating preference tests after growing separately for 11 generations on starch or CMY medium. Source

Returning to the Drosophila experiments, the results suggest that the rapid acquisition of new mating preferences might be due to a change in the fly's microbiota. Any evidence for this? Starch and CMY flies reared in the presence of antibiotics ("cured" flies) exhibit random mating. Furthermore, 16S rRNA analysis showed a marked difference in the microbiota associated with the CMY flies versus the starch flies. One species — Lactobacillus plantarum — that made up 3% of the community in the CMY flies increased to 26% in the starch flies (viable count of 2.3 × 105 per fly). This is not too surprising since changing an animal's diet is known to alter the microbiota and L. plantarum makes an active α-amylase. More evidence? Infecting cured flies with L. plantarum restores their mating preferences. Infection with other culturable bacteria isolated from starch flies — either individually or as a mixture of 41 strains — had no effect. The Wolbachia endosymbionts don't seem to be involved as both groups of flies harbor the same Wolbachia strain, and infecting cured flies with Wolbachia does not restore the mating preferences.

Some questions remain here, not the least of which is how these commensal microbes affect mate selection What comes to mind is that they may alter the fly sex pheromones. Drosophila and many other dipterans carry long-chain hydrocarbon pheromones on their cuticle (termed cuticular hydrocarbons, or CHs). Other flies perceive these compounds upon contact or at a short distance. Some 56 CHs were recently characterized in D. melanogaster, some of which are gender-specific or are altered upon mating. The Rosenberg group did an initial screening of the CHs present in their CMY and starch flies, looking for differences that could be attributed to the altered microbiota. Indeed, there were differences for several CHs between the CMY and starch flies, and these differences were reduced by antibiotic curing. It will be interesting to hear whether the L. plantarum make some of the CHs themselves, or how they might alter CH synthesis by the host.

Mating preference (assortative mating) is one way to produce reproductive isolation without physical separation, a mechanism required for sympatric speciation. I find it pleasing that such a large evolutionary effect appears to be driven by a Small Thing.