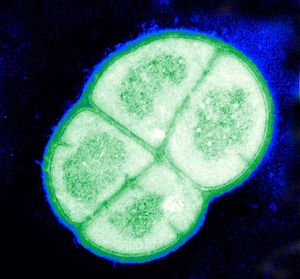 Ploidy is not a term that has much currency in bacteriology, but it does make an appearance once in a while. Ploidy, as per the dictionary, is the number of chromosomes per cell. It’s a term widely used for cells that are generally uninucleated, such as our gametes and our somatic cells. The problem here is that bacteria are not consistently uninucleated. In some bacterial species, the cells always contain more than one nucleoid, while in others the number is variable, depending on their circumstances. Due to such vagaries, there are several ways to define ploidy in bacteria.

I recognize that for many purposes, such as when considering the radiation resistance of an organism, these definitions make little difference. It comes down to simply a matter of words. Still, can you guess which definition I favor?