One Symbiont Is Good, Two Are Better: The Forever Fascinating Story of the Leaf-Cutting Ants and Their Bacteria 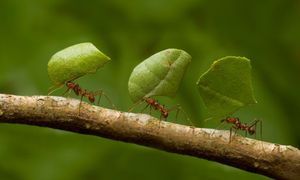 Now here’s a question you’ve been asking all along about the interaction between the leaf cutting (Attine) ants, the fungi they cultivate, and the bacteria that make antifungals against unwanted fungal species. Have these bacteria evolved along with the ants to protect their gardens from unwanted "weeds," or do the ants pick up such bacteria from their environment? New data suggest both things happen.

To remind you, leaf-cutting ants practice fungiculture, and have been doing this for about 50 million years. The bits of leaves and flowers that they bring to the nest get chewed up, fertilized, placed in suitable “gardens” within the nest, and seeded with fungal material from previous gardens. Obviously, fungal gardens can be overrun by unwanted species, with disastrous results for the colony. To keep this from happening, the ants depend on selective antifungals made by actinomycetes. We have visited this topic in the past (click here and here).

Looking at three colonies of leaf-cutting ants collected in Trinidad, the authors of a recent paper examined two kinds of actinomycetes present, a Pseudonocardia and a Streptomyces. The Pseudonocardia are vertically transmitted through the queen ants and may well have evolved with the ants. In the words of Cameron Currie:

...when a queen leaves for her mating flight, she carries a pellet of fungus, collected from her natal nest, in her infrabuccal pocket, and transports the mutualistic bacteria on the cuticle... Indeed, both microbial symbionts show some degree of broad-scale phylogenetic congruence with the ant host. Strict ant-symbiont phylogenetic congruence is, however, disrupted by symbiont switches (horizontal transmission) between fungus-growing ant colonies, species, and even genera. 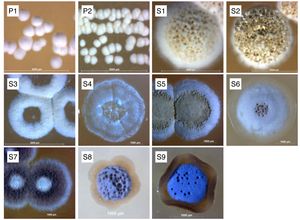 The view that ants and Pseudonocardia coevolved has been challenged on the grounds that there is plenty of free-living Pseudonocardia in the environment (plus some other arguments). The Streptomyces, on the other hand, are agreed upon to be new arrivals because they are common in the environment and, I’m guessing here, not known to be carried by the queens to the new nests. The Pseudonocardia make an unusual antifungal called dentigerumycin, plus a relative of nystatin, whereas the Streptomyces make the well-known antifungal candicidin. Genome scanning revealed that these Pseudonocardia have the genes needed to produce the nystatin-like antifungal.

When you think of it, the ants better be clever in their selection of antifungal–producing bacteria. Too broad the activity spectrum of an antifungal and the cultivated fungi may be affected, leading to a calamitous loss of food. So, one would guess that once a successful symbiosis has been established, it would keep going. But here and there, some additional help from bacteria in the environment may add antifungal fine-tuning to the situation. What emerges is that the greater the number of partners in a symbiosis, the more wooly it gets.

And we are only now figuring out how to augment our symbionts through methods other than trial and error = evolution. Do you believe that we know enough to consider manipulation our symbionts in this way? Considering the danger of bacterial pathogens, mistakes could be far-reaching. Or would they?