We reprint here an article from the Spanish blog Curiosidades de al Microbiologia. This post was written by blog host Manuel Sánchez and is reprinted in translation with his permission. 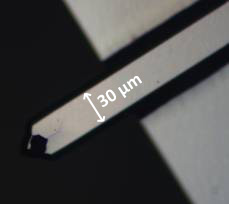 Physical Virology. Such is the title of the article that appeared in Nature Physics. This is the name for a new discipline that is under development. Its focus is the study of viruses from a physical perspective. Seen this way, viruses are natural nanoparticles with distinct mechanical and thermodynamic properties

Professors W. Roos and G.J.L Wuite of the Foundation For Fundamental Research On Matter of the University of Amsterdam and R. Bruinsma of the Physics Department at UCLA summarize in that article the possible implications of this new discipline, especially for medicine.

Viruses are able to spontaneously assemble into icosahedrathat enclose their genetic material, and do so in an environment, such as the cytoplasm of the host cells, that is loaded with similar molecules. This process takes place without an external source of energy, that is it follows the thermodynamic laws of reversible self-assembly. But there is one fundamental difference: once assembled, the capsid does not disassemble. For this reason, viruses are a good model for studying the formation of nanostructures that require only minimal energy expenditure. 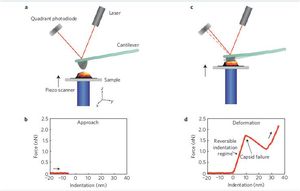 (Click to enlarge) Measurement of nanoindentation with an AFM. In a the needle does not touch the virus and no force is exerted (b). In c the tip exerts force on the virus. At first, the deformation is reversible, but after a given threshold, it becomes irreversible (d). Source

Many physical studies of viruses use the atomic force microscope (AFM). This microscope acts like the needle of an ancient record player. With this technique one can not only “see” viral capsids, but also study the mechanical properties of each particle. To do this, the needle acts like a hammer, hitting the capsid to produce indentations. It turns out that capsids suffer from material fatigue, just like macroscopic structures. Measuring the deformation curves of different capsids, the authors found that they act as elastic modules whose resistance varies between that of polyethylene and Plexiglas. Some capsids can withstand internal osmotic pressures greater than 10 atmospheres.

One of the unexpected results has been that some viruses “soften up” during maturation, whereas others harden and become more resistant to pressure. An example of the first is HIV, of the second, bacteriophages. In the case of HIV, there is a correlation between the degree of “softness” and infectivity. Immature HIV particles are “harder” but much less infective. 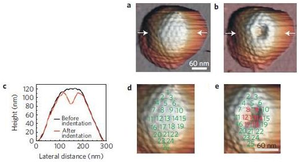 (Click to enlarge) Images of a single HSV virus particle a before and after nanoindentation. The capsomeres are readily visible. In c the graph shows the profile along the white arrows. d and e show the numbers of the capsomeres and the indentation where the capsomeres in red were removed as the result of failure of the shell. Source

The very fact that the process of assembly and stabilization of virions can be described in terms of the mechanics of macroscopic elastic bodies may lead to possible uses in biotechnology. One idea is to use viruses as nanocontainers for the transport of substances to their host cells. Viruses can be highly specific in binding to host cells, thus they may be used to carry medicines to certain parts of the body and not to others.