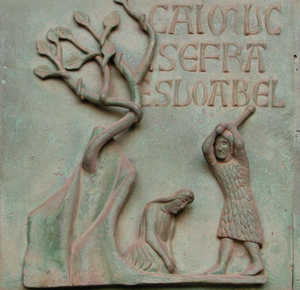 Bacteria capable of sporulation go out of their way to grow rather than sporulate. They will therefore try to obtain needed nutrients, even at the cost of killing their neighbors. When starved for nutrients, cells of Bacillus subtilis engage in cannibalism, that is they lyse their siblings and use the nutrients thus obtained to postpone their own sporulation. A similar phenomenon, termed fratricide, has been reported in Streptococcus pneumoniae where the killing of siblings is linked to the induction of competence and the release of DNA from lysed cells. The antimicrobial agents secreted within the same colony by either cannibalism or fratricide belong to the family of bacteriocins. Be’er and his colleagues now report a third unique situation where bacterial stress leads to sibling death.

Paenibacillus dendritiformis (T-morphotype) forms branched colonies on low-nutrient, hard agar plates. When two neighboring colonies are produced by inoculation from the same culture, their growth is inhibited at the zone of closest contact. All the cells at the interface of the inhibited region are killed. Death occurs even at relatively high nutrient levels, thus ruling out cannibalism (killing to obtain nutrients) as the mechanism that operates here. 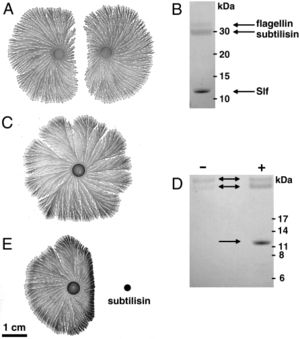 (Click to enlarge) A Two sibling colonies of Paenibacillus dendritiformis (T-morphotype) on an agar plate. B Proteins extracted from agar
between colonies and analyzed by SDS-PAGE and identified by peptide sequencing as flagellin (32 kDa), subtilisin (30 kDa) and Slf (12 kDa). C Single colony of P. dendritiformis grown on an agar plate. D SDS-PAGE of proteins surrounding a single
colony, without (-) or with (+) added subtilisin, as shown in panels C and E. E Single colony with subtilisin (0.1mg) added 1 day after inoculation (black dot). Source

The authors propose that a negative feedback loop regulates the concentration of subtilisin at the front of a growing colony. When added up to a threshold concentration, subtilisin promotes colony growth and expansion. When this level is exceeded due to the secretion of additional subtilisin by a neighboring colony or by nutrient depletion in the inhibited area between colonies, subtilisin cleaves the innocuous DfsB to form the lytic Slf. The resulting reduction in the population is important for survival since the reproduction rate at the front of the colony would otherwise become faster than the ability of the colony to expand. To quote the authors: A colony’s expansion is limited by surface tension; it cannot expand fast enough to create new space for the reproducing bacteria.

An alternative solution could have been for the cells to sporulate, but sporulating bacteria produce high levels of subtilisin, which would only aggravate the situation.

Homologs of Slf occur in many Gram-positive bacteria and also in the yeast Saccharomyces cerevisiae. It will be interesting to see if these Slf-like proteins play the same role in regulating competition between colonies.