« Talmudic Question #67 | Main | One Symbiont Is Good, Two Are Better: The Forever Fascinating Story of the Leaf-Cutting Ants and Their Bacteria » 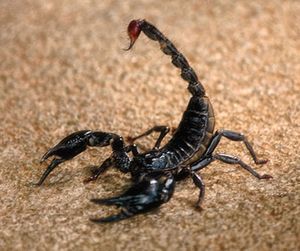 Another tail of death. Source

Bacteriophages are expert killers, having been delivering death to bacteria for several billion years. We are not the first organisms to recognize their skill. Bacteria themselves have borrowed the tail of a phage and fashioned from it a targeted bacterial killer for their own use.

We first became aware of this in 1925 when André Gratia observed that E. coli produced a proteinaceous agent that efficiently killed other E. coli, but not unrelated bacteria. Being proteinaceous and selective is what distinguishes these agents, the bacteriocins, from other antibiotics. Many are now known, made by both Gram-negatives and Gram-positives. Initially they were classified and named for who produced them. Thus colicin for that first one, monocin made by Gram-positive Listeria monocytogenes and pyocin for those made by Pseudomonas aeruginosa (formerly pyocynia).

As the list grew, it became evident that the bacteriocins are a heterogeneous bunch. Some of them, including colicin, are trypsin-sensitive proteins, typically encoded on plasmids. (For more information about this group, click here.) Others are trypsin-resistant particles that can be purified by the same techniques that are used to purify viruses. Under the electron microscope, they look exactly like phage tails. Some resemble the contractile tails of the Myoviridae complete with sheath, core, base plate, and tail fibers, others the flexible but non-contractile tails of the Siphoviridae. These headless phage particles contain no DNA. 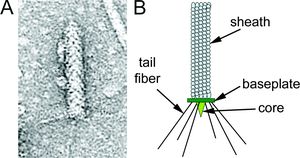 R-type pyocins. A SEM of R2 pyocin from P. aeruginosa PAO1 at X 115,000. Sheath length is ~80 nm. B Diagram showing the structure of contractile TLPs such as the R-type pyocin. Source

The best studied examples of these "tail-like particles" (TLPs) are the contractile R-type pyocins ("R" being the strain where the first one was observed). P. aeruginosa PAO1 produces low but detectable numbers of them when grown in liquid culture. Treatment with UV or mitomycin C, as used to induce prophages, leads to cell lysis and the release of 10 – 100 times as many TLPs. Each lysed cell yields about 200 TLPs, each individual TLP able to kill a sensitive cell single-handedly. The killing is quick and straightforward. Like a phage, the TLP adsorbs to specific receptor sites on the cell surface. But in this case, contraction of the sheath drives the inner core through the cytoplasmic membrane, killing by puncturing and immediately depolarizing the membrane.

These efficient killers are indeed related to phage. One gene cluster in the P. aeruginosa PAO1 genome includes about 10 genes that are clearly related to tail structural genes of the P2 family of phages that infect diverse bacterial groups. Notably, no genes encoding proteins for phage head structure, DNA packaging, or replication are to be found. P. aeruginosa PAO1 also makes the other type of TLP, the F-type pyocins that look like the flexible, non-contractile tails of the Siphoviridae, and these are encoded by a similar gene cluster that is related to the lambdoid phages. Apparently this killing strategy evolved on more than one occasion, adopting the tails from at least two different phages.

Might we have here a potential new class of antibiotics for medical purposes? The use of phage as targeted antibiotics to treat bacterial infections has been explored for decades, with limited success. And TLPs have a further disadvantage: they are a one-shot deal since they can't replicate within the target bacterium. However, they are highly selective. The varied R-type pyocins all adsorb to LPS receptors in the outer membrane of their targets, but they are as finicky as phage for particular strains. This specificity, for both phage and TLP, resides in the sequence of the C-terminal end of the tail fiber protein. When those ends are experimentally swapped between different R-type TLPs, the donor of the tail fibers determines the binding and killing specificity.

Taking this one step further, enterprising researchers have "re-targeted pyocins" to kill E. coli O157:H7 by substituting coliphage tail fibers for the original pyocin ones. These engineered TLPs effectively kill that pathogen on the surface of beef being processed for market. The food industry is paying attention.

Because they cannot replicate themselves, some want to call these TLPs "defective prophages." To me, that is like calling a free-standing 2-car garage a defective house. And besides, does not the bacterial host deserve some credit for co-opting these phage tails for its own ends? And just what might those ends be? Any benefit must be weighed against the cost of production. Granted, cells carrying the gene cluster are resistant to their own pyocins and normally pyocin production is kept repressed, minimizing the costs. However, when stress activates the cell's SOS response, pyocin production is turned on. The cell is soon lysed by the typical phage mechanism, releasing the assembled TLPs. Thus TLP production means death to the producer, a high cost indeed. Perhaps the producer strains benefit from killing related non-producers, but I'm not convinced that is the whole story.

On the other hand, there is at least one instance where bacteria use TLPs to bring down big game. Serratia entomophila uses a TLP-like particle to deliver a lethal dose of toxin to larvae of the New Zealand grass grub. Some sophisticated tinkering with the original phage tail was required along the way in order to modify it for delivering a payload to eukaryotic cells. This tinkering involved the replacement of some tail fiber components with those from adenoviruses and the modification of the tail structure itself.

This is not the first time this blog has reported the co-option of phage components by their hosts. Some Bacteria (e.g., Rhodobacter capsulatus) and Archaea package random segments of their own DNA inside "capsids" (gene transfer agents) for transport to other members of their own species. Parasitoid wasps use this tactic to package specific toxins for delivery along with their own eggs into the caterpillars that serve as nurseries for their developing young. Even insect-killing Photorhabdus luminescens may use TLPs for their killing, too. We humans have put S. entomophila with its TLPs to work as a commercial biological control agent to protect the pastures of New Zealand from the hungry grass grubs. However, likely this is just the beginning. Given their possible use as specific antibiotics or for targeted cargo delivery, surely we've not yet reached the end of this tale.

Merry, I cannot express to you how much I enjoyed that post. I have long thought phages were very interesting, and the whole GTA business is exciting (as is the Terry Beveridge---RIP and much missed---finding of DNA containing membrane vesicles being excreted). Gene transfer is going to be the norm, not the exception. I think that organisms probably have to worry more about keeping their genomes intact! Again, such a fun essay.

And not to be found in textbooks!