Hoatzin adult and chick. Notice the claws on the wings of the chick. Source

Here’s a bird that thinks it’s a ruminant. Or, speaking science, ruminants may have coevolved their singular way to digest plant material with a bird. I am talking about the hoatzin, a tropical pheasant-sized or, in honor of the day, turkey-sized bird of Central and South America that ferments in its crop the leaves it eats. Opisthocomus hoazin, to give his full name, is unique. No other bird — and there are some 9000 species — is known to carry out a pre-gastric (ruminal) fermentation (although a few do something similar in the cecum). Hoatzins are almost exclusively leaf-eaters, so they benefit greatly from having a microbiome that can handle such food, just as cows do. To accommodate this activity, they have an unusually distended crop and a large esophagus.

Baby hoatzins, like all vertebrates, develop into adulthood in a gradual manner. Over time, the microbiome of their crop undergoes changes. Here is what the authors of a study led by Maria Dominguez-Bello of the University of Puerto Rico have to say: In comparison with the adult, the hoatzin chick crop had a greater abundance of Flavobacteriaceae, Clostridiaceae and Lachnospiraceae but lacked phyla DSS1, Deferribacteres and Termite group 1, which were mostly present in adults. Archaea, including methanogens, are also present in abundance in the crop, and so are protozoa. It is all quite reminiscent of the rumen microbiome of ruminants. 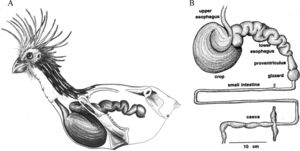 Want to know more about the hoatzin? Here is a sample: It has an unfeathered blue face with maroon eyes and a spiky crest on its head, and the sole extant species within the family Opisthocomidae. It is often considered one of the most primitive of birds as the hoatzin chick has two claws on the first and second digits of their wings to help it grip branches and clamber about awkwardly. Actually, the claws on the wings are lost with maturity, but for a while, the bird looks like the extinct Archaeopteryx, the late Jurassic candidate for a transitional form between dinosaurs and birds.

Not everything about the hoatzin is attractive to humans. It emits a distinctive manure-like smell, which explains its nickname: stink bird. But its attraction to microbiologists is evident. This species has gone its own way, at least among the birds, to accommodate a richly productive and diverse microbial community.