A Role for Prions in Alzheimer’s Disease?

What if there were a connection between the diseases caused by prions and Alzheimer’s? If that were the case, we'd expect a substantial increase in our understanding of both. Indeed, as we will see below, there is now evidence that the two phenomena are related in some way. But first, a bit about prions.

Mutations at different sites in a normal brain protein, the prion protein (PrPc), result in misfolded proteins (PrPsc) that cause a variety of neurodegenerative diseases termed transmissible spongiform encephalopathies (TSE) in both animals and humans. The human diseases include Creutzfeldt-Jakob disease (CJD), while the animal diseases include the infamous “mad cow disease”(bovine spongiform encephalopathy,) and others. The misfolded form of the prion protein acts as a template that leads to the conversion of the normally innocuous prion proteins into infectious, disease-causing ones. Prion diseases are characterized by long incubation periods and “spongiform” changes in the brain leading to neuronal loss. The normal functions of the PrPc protein are not well understood, although a recent study using knockout mice lacking it suggests a role in the processing of sensory information in the olfactory system. 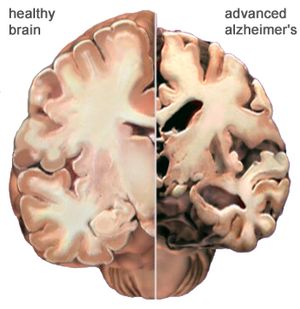 A comparison of a normal brain with one altered by advanced Alzheimer's disease. Source

In Alzheimer’s patients, amyloid-beta peptides (Abeta) build up in the brain, first into short oligomers, later as long, sticky fibrils that form plaques in spaces between neurons. In addition, Tau protein aggregates within neurons. Somehow, these protein deposits lead to the symptoms of dementia. Although Alzheimer’s and prion diseases share some common features, a connection between the two had not been established until researchers recently found a possible role for prion proteins in Alzheimer’s disease. Interestingly, the results obtained by different groups are contradictory. Some reported that PrPc inhibits the progression of Alzheimer’s, others that it promotes disease development.

The precursor to the troublesome amyloid-beta peptides (Abeta) is the protein APP. APP can be acted on by either the protease β-secretase to form Abeta or it can go a different metabolic route (processed instead by α-secretase)that precludes Abeta formation. Thus the processing of APP by the β-secretase might be a critical step for pathological amyloid production. It was known that, like APP, PrPc is processed by zinc metalloproteases. Therefore, Parkin and colleagues looked into a possible role for PrPc in either enhancing or interfering with the cleavage of APP.

Transfecting PrPc cDNA into a tissue culture line expressing APP decreased the amount of Abeta secreted into the medium by 92%. In addition, when the level of expression of PrPc was reduced by 60% (using siRNA duplexes), Abeta secretion was partially restored. Third, in both PrPc knockout mice and scrapie-infected mice, the levels of Abeta in brain tissue were significantly elevated. 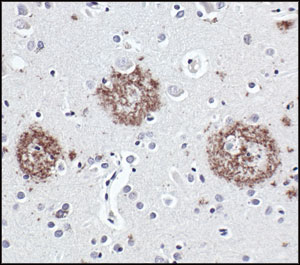 Section of the brain of an Alzheimer's patient. APP/beta-Amyloid is identified using a mouse monoclonal antibody specific for mouse amyloid protein mAb. Source

PrPc down-regulates the β-secretase cleavage of APP, thus decreases the production of Abeta. This activity requires that PrPc localize to cholesterol-rich rafts in the membrane and is mediated by the interaction of the N-terminal polybasic region of PrPc with glycosaminoglycans. It would be interesting to see if aging reduces the ability of prion proteins (e.g., PrPc) to protect against Abeta formation and hence to prevent the development of Alzheimer’s. Of course none of these studies were carried out in people, but the authors suggest that prion proteins have the potential to be clinically useful for arresting the progression of Alzheimer’s.

In contrast, Lauren and colleagues see a destructive role for PrPc in Alzheimer’s. They tested Abeta for interactions with 352 specific brain proteins. The strongest and most specific of these interactions was with the normal prion protein PrPc. Abeta binds to amino acids 85-110 in the middle of the protein. Blocking these amino acids with an antibody eliminates the interaction.

Abeta clusters interfere with a process called long term potentiation, which is essential for both learning and long-term memory—abilities obviously deficient in Alzheimer’s patients. Interestingly, in PrPc knockout mice, Abeta clusters did not affect those abilities. A Chinese team has recently shown that a protein called Tau, another major player in Alzheimer's, also interacts with PrPc. Thus it appears that the cellular damage caused by Abeta may require at least a three-component complex in order to carry out its destructive function: Abeta, PrPc, and Tau.

Whereas prion diseases are clearly transmissible, Alzheimer’s has long been thought to be non-infectious. This belief may now be overturned by the work of Meyer-Luehmann and collaborators. They injected dilute extracts of brain homogenates from autopsied Alzheimer’s patients or from APP-laden transgenic mice into the hippocampus of transgenic mice that are predisposed to develop an Alzheimer’s-like condition. Both of these in vivo seedings induced formation of plaques in the brain and the associated pathology in a time- and concentration-dependent manner. The seeding activity of the extracts was attributed to the presence of Abeta because the activity could be reduced or abolished by antibodies against Abeta or by immunizing the host against Abeta. Most interestingly, the phenotype of the induced disease was dependent upon the host and the source of the agent, suggesting that Abeta exists in multiple forms with different biological activities. These characteristics were demonstrated for the first time, but are well-known for prion strains that cause TSE.

So yet another similarity between prion diseases and Alzheimer’s is now revealed. But it may well be more complicated. No seeding activity was observed if brain extracts from diseased animals were injected into normal mice, indicating that, if Alzheimer’s is indeed infectious, a seeded individual would have to be genetically predisposed to it in order for the disease to develop.

Thanks so much, Shani, for pointing out the Eisele paper. Seeding of Abeta from the
periphery to the brain is certainly an important new finding in Alzheimer's research.