« Ploidy Redux | Main | A Role for Prions in Alzheimer’s Disease? »

One in a Million 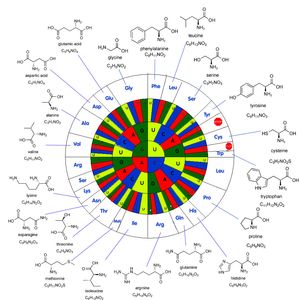 (Click to enlarge) The genetic code and the amino acids it encodes. Source

Like it or not, we can't shop around for a genetic code, nor do we have a choice of brand or model. We're pretty much stuck with the one we have at this point (although some researchers are modifying the code to synthesize proteins containing "designer amino acids"). The universal genetic code is just that, virtually universal. Oh, there are about 20 other "genetic codes" known but almost all of them are used only by mitochondria or else the differences are limited to start and stop codons. So how good is the one we have?

Well, what makes one code 'better' than another? An important property is how well the code minimizes the usually deleterious phenotypic effects of point mutations and translation errors. On average, the impact from substitution of one amino acid for another would be expected to be less, the more similar the amino acids. It was noticed as soon as the genetic code was deciphered that the codon assignments were non-random. One example of that non-randomness is that codons that differ by only one base tend to code for chemically similar amino acids. But judging by this criterion, just how good is our genetic code?

To answer this question, researchers in a 1991 paper represented the similarity between each pair of amino acids (based on their polarity) as a mathematical distance. They generated a large number of random alternative codes, but constrained them so that they all had the same probability of synonymous substitutions as does the natural genetic code. They also ignored start and stop codons. Only two out of 10,000 randomly generated codes were better than the natural code, i.e., for only two did the single base changes yield the substitution of more similar amino acids overall.

In a follow-up paper in 1998, the authors refined this approach. It is known that some base changes occur at a higher frequency than others (e.g., transition mutations are more frequent than transversions), and likewise there are known biases in the frequencies of translational errors for each codon position. When they incorporated the biases in point mutations and translational errors into their calculations and looked at a million randomly generated alternate codes, they found only one generated code that performed better than ours. This might indicate that our genetic code is the product of natural selection, but if, when, and how are subjects for active debate, as is often the case when we don’t know the answers. (For two early viewpoints, approaching the questions from opposite directions, see these papers by Woese and Crick.) In any case, our genetic code is a keeper.

Note: After posting this, I found a useful review article that puts this "adaptive" argument into context. Recommended.

Right you are....a sample of one does not a scientific experiment make.

Your blog link didn't come through, so I went looking. Is this the right link?

Excellent post. What particularly intrigues me about analyses like this is they may provide clues to the puzzle of how such a good genetic code could have evolved so quickly. They suggest that the process need not have been a totally random walk. Other ideas are that the choice of neighboring codons for different amino acids is influenced by their having related pathways for their biosynthesis.

Whatever the factors might actually be, given a few guiding parameters the process of exploring "code space" could have proceeded quickly. If we do ever find a second sample of life, the code used might be "surprisingly" similar to ours (an idea discussed by Simon Conway Morris in his book "Life's Solution").