« Microbial Matchmakers | Main | One in a Million » 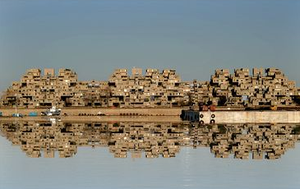 We recently posted a short piece on the term ploidy as it applies (or not) to prokaryotes.  Dana Boyd pointed out that in prokaryotes the term refers to sets of identical chromosomes, unlike in eukaryotes, where each chromosome of a set is usually different. The distinction seems crucial enough to warrant further explication.

Your musings on ploidy have brought me to a possibly Talmudic Question, why are there no real diploid or multiploid bacteria or archaea? The useful sense of ploidy is that it represents the contribution of parental genomes to that of offspring. Diploid organisms have one chromosome from each parent. Bacteria, the ones I know about, are haploid however many nuclei they have per cell. However many nucleoids E. coli may have it is haploid:they are all identical. It is clear that the number of gene copies per cell could be significant for regulation of gene expression, but the effects of multiple haploid nuclei are insignificant compared to the consequences of real diploid nuclei which have two independently inherited and therefore possibly different copies of each gene. At least E. coli and B. subtilis are haploid in this sense.

Genetic diversity in diploids is undoubtedly important in facilitating rapid evolutionary change. Phenotypic characteristics of diploid organisms result from the activities of two genes in most cases. If the genes are identical and identically regulated, then they will contribute equally to their phenotype(s). However if they are different or differently regulated, they may contribute differentially to the phenotype(s). Differential selective effects on phenotypes drive evolution. That's the point about diploid organisms. Shifts in allelic frequencies can alter the fitness of a population very quickly. Are there real diploid bacteria? If not, why don't bacteria do this?

I think you nicely laid out the three most reasonable definitions of ploidy, but Dana also points out that the classical use of diploid (as with most eukaryotes) defies each of these definitions because it infers the acquisition of unique but homologous chromosomes from each parent. I do not know of any example in bacteria where this situation is stably maintained for a long period, even following conjugation. (Although I bet as we learn about more and more bacteria, we may well come up with an exception like we have to the dogma that "bacteria do not have chromosome structure, do not have poly-A tails on mRNA, do not have introns", etc.) The term merodiploid was coined to describe situations where two copies of a region of the bacterial genome are present in a single bacterium. Even in this situation, unless the recombination system is mutated, distinct alleles of genes on the two copies rapidly undergo gene conversion (homogenotization) resulting in two identical copies.

However, regions of bacterial chromosomes undergo duplications at a very high frequency, and once duplicated these regions can be further amplified to high levels. This process facilitates the selection for differential phenotypes that drive evolution (see Bergthorsson et al. 2007. Ohno's dilemma: Evolution of new genes under continuous selection. Proc Natl Acad Sci. 104:17004-9). It may be that the ability of bacterial chromosomes to quickly undergo gene amplification in response to environmental selection is an effective alternative to the stable maintenance of one copy of each chromosome from both parents — seemingly different processes that are both effective solutions to the demands of evolution.

But, back to the ploidy conundrum, I think the common use of the term diploid in prokaryotes is an unfortunate historical accident that confuses students. Nevertheless, we may just have to live with it, much like we suffer with dual scientific meanings of the word "transformation."

In the post on Bacterial Ploidy you propose three ways to define this term for prokaryotes. Useful comments by Dana Boyd and Stanley Maloy followed (see above).

Regarding differences between eukaryotic and prokaryotic ploidy, I would like to refer to the work of Willy Donachie who introduced the term hierarchical segregation. With this term he emphasized that prokaryotic chromosome segregation differs fundamentally from that of eukaryotes in that it prevents the maintenance of genetically heterozygous lines, even in polyploid cells.

The authors explain how a mutation in a eukaryotic diploid cell is maintained as a heterozygous cell line because during mitosis all pairs of sister chromosomes (chromatids) become aligned and separated together in a plane perpendicular to the division plane making that every daughter cell inherits the mutation. However, a mutation in a prokaryotic, multichromosomal cell eventually results in a homozygous cell line, because during hierarchical segregation sister chromosomes continue to move apart and do not necessarily become separated in the same cell cycle. This is because the division plane forms between the earliest pairs of replicated chromosomes, so that the duplicated chromosomes carrying the mutation end up in the same daughter cell, leading to homozygotisation. The answer to Dana Boyd’s question is that bacteria cannot be diploid and heterozygous because of the non-mitotic way in which they segregate their DNA. 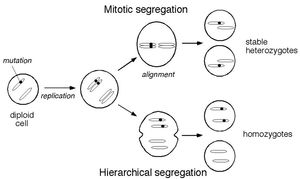 Hierarchical segregation also holds for E. coli cells that have been induced to become spherical (see, for instance, here and here) and that are multichromosomal because sphere-formation delays division. As pointed out by Donachie E. coli is in that respect not different from cells like Neisseria gonorrhoeae, referred to by Abe Eisenstark.

A small digression. Heterozygous diploid bacteria may result artificially and temporarily from protoplast fusion. When two protoplasts with different genomes are fused, they form a diploid cell until they are allowed to revert to regular bacteria. The diploid state is evanescent. Pioneered by Pierre Schaeffer, Brigitte Cami, and Rollin Hotchkiss in 1978, this technique has been used for “genome shuffling" and has been employed widely for strain development.

A slightly larger digression with a historical note. By the late ‘70s, hybrid plants had readily been constructed by fusing protoplasts and allowing them to regenerate into regular cells. In the above paper, the authors lamented that it seemed surprising that no sustained attempt at fusing bacterial protoplasts has been reported. The emphasis in the comment is properly on no sustained attempt. So, what was tried before? I don’t know much about it (as most of it was never published) but I can trace one aspect of the story. After his 1945 discovery of cell-to-cell conjugation in E. coli, Joshua Lederberg tried alternative ways of achieving bacterial mating. He himself spent considerable time on this problem and championed the notion that bacteria were “cells.” I wrote a short article about this in Resonance (an Indian journal on science education). I quote from there: He made the important discovery that penicillin induces the formation of spheroplasts. The announcing paper offers a promissory sentence about spheroplasts: Their possible genetic applications are being studied in this laboratory. Surely, he must have intended to use protoplast fusion as an alternative form of conjugation. Well, why did this not work for Lederberg, when so many other things did?

My question is not why E. coli and other fast growing bacteria don't have expensive true diploid nuclei, but rather where are the ones that use the eukaryotic evolutionary strategy of pervasive diploidy. Part of Stanley's answer is partial diploidy, it is a partial answer only. He is correct in saying that the last word is not in. But maybe bacteria did evolve diploidy a long time ago. Didn't we evolve from bacteria or something like that. Are we the diploid bacteria?