This blog is now entering its fifth calendar year, surely a respectable age for a blog, perhaps bordering on the venerable. With the passage of time, our blend of posts has included more and more contributions from guest writers, some from young students, others from experienced and distinguished microbiologists. In other words, this blog has become a bit of a forum where people of different backgrounds and experience can share their excitement for the world of small things. We hope that as this blog enters its next year it will continue to provide you with microbial joys.

As is our tradition, we present here a lightly annotated list that includes most of our posts from the past half year. 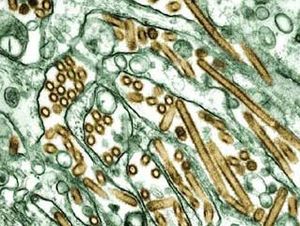 Physical Virology.  Manuel Sanchez tells us how physical measurement can be carried out on a single virus particle, revealing differences in how far a virus can be pushed around. We borrowed this piece from his blog, Curiosidades de la Microbiología.

Tales of Death.  Some Bacteria have turned the burden of viral infection into an opportunity. They have co-opted the elaborate phage tail structures for their own use, for killing specific target Bacteria and, sometimes, even larger game.

A Giant Among Giants.  Mimivirus made a big splash, but a whole host of giant viruses have been found, mostly in aquatic environments, and more are being discovered all the time. Their genomes carry hundreds of genes, many of them unexpected for a virus.

A Fastidious Bacteriophage.  Michael Yarmolinsky brings back phage Chi from near oblivion. This coliphage attaches to a host's flagellum and then makes its way to the cell surface, taking advantage of the flagellar rotation.

When the End Is the Story.  Welkin Johnson tells us that HHV-6 is unique among human hespesviruses in being integrated into our chromosomes. Not only that, it prefers the telomeres!

Promiscuous Bacteria & Viral Playboys.  Occasionally, phages carry bacterial genes from host to host — one of the mechanisms for horizontal gene transfer between Bacteria. Looking at single bacterial cells, researchers found that genes were delivered more often than we realized, and even to non-hosts.

Uncovering Beauty in Proteins to Fight the Pneumococcal Fratricides. César Sanchez let us borrow a piece from his blog Twisted Bacteria where he discussed how competent pneumococci induce their non-competent brethren to commit suicide.

Cheap Exports.  Univ. of Michigan graduate student Daniel Smith explains how he discovered that proteins meant for export contain more of the amino acids that are energetically cheaper to make.

The Ins & Outs of Those Mysterious Microcompartments.  Do you feel a bit mystified by carboxysomes, Pdu microcompartments, and other such subcellular structures? Alan Derman makes them crystal clear.

Fattening Up Microbial Geological Biomarkers.  Sterol-like compounds, the hopanoids, survive in rocks for billions of year. Paula Welander explains how studying the present day hopanoids helps us to decipher their messages as evolutionary markers.

The Flying Cow.  A rare bird there is that has a rumen-like crop, with rumen-like microbiome and all.

Trees — Phylogenetic & Real.  The cyttarias, fungi of the Southern Hemisphere, have coevolved with their host trees, the Southern beeches. How appropriate that Darwin described them!

The Sea Slug's Guide to Plastid Adoption.  One meal of plastids provides a young sea slug with an in-house photosynthesizing partner for life. Makes one wonder where the genes needed for plastid maintenance are lurking.

Fine Reading: The Sex Habit of Fungi.  If you’ve been confused by the sex habits of fungi with their multitude of mating types, here’s your chance to un-confuse!

Bacterial Ploidy.  This is a term that has been applied to Bacteria with various meanings, something we tried to clarify here.

One Symbiont Is Good, Two Are Better: The Forever Fascinating Story of the Leaf-Cutting Ants and Their Bacteria.  These proto-farmers depend on selective biological fungicides to preserve the purity of their crops. Such compounds are made by both old associates and newly acquired actinomycetes.

Microbial Matchmakers.  For fruit flies, diet can change their microbiota; a change in the microbiota can alter their mating preferences.

The Twist in the Story.  Kevin Young tells us that the helical shape of Helicobacter is a virulence factor. No wonder he loves bacterial shapes. See here.

Bacterial Physiology and Virulence: The Cultures Converge.  Fred Neidhardt discusses the fascinating connection between the alarmone, ppGpp, and bacterial pathogenesis

Listeria’s Visiting Card.  Daniel Portnoy’s lab discovered a novel signaling compound, cyclic-di-AMP, and clarified something about its role in pathogenesis.

Riding the Spore Wind.  Mushrooms disperse their spores by forcibly discharging them. In some cup fungi, some of the spores help others travel further by creating a bid of wind.

Marine Snow: Dead Organisms and Poop as Manna in the Ocean.  Graduate student and blogger Hannah Waters tells us of the riches that descend to the bottom of the oceans, including excreta and cadavers.

Biofilms Over Troubled Waters.  Mark Martin describes the thin surface layer on the ocean that provides a habitat for oil-degrading microbes.

An Inactive Mine Provides Active Opportunities.  The highly acidic outflow from an old mine in California is a heaven for metagenomicists. Plenty of novel Archaea there.

Power of Ten.  You’ve often heard that our body has 10 times more bacteria than human cells. Where does this estimate come from?

The Uncultured Bacteria.  Kim Lewis approaches the apparent non-cultivability of most bacteria by showing that, with an understanding of bacterial physiology, much ingenuity, and lots of patience, many more species will grow in the lab.

Small Things: First Responders to Oil Spills.  Jay Grimes and Ron Atlas wasted no time in explaining the role that microbes are likely to play in cleaning up the Gulf of Mexico oil spill in 2010.

Hello Again, Metabolism.  Amy Vollmer cannot let go of her love for central metabolism and explains why it still must be taught.

Microbiology in the Andes: Ancient and Unexpected.   In the 17th century, an early university in Quito, Ecuador, was a premier center of learning in Latin America.

It’s a Book!  Microbes matter to coral reefs, according to the recent book by Forest Rohwer (and Merry).

Of Ancient Curses, Microbes, and the ASM.  On the occasion of her ascendancy to the ASM presidency, Bonnie Bassler shares with us her thoughts and insights about matters microbiological.

Such a fantastic resource for educators, and for people (like me) who are eternally afraid that they will miss something weird and wonderful in the microbial world! Hats off (literally) to Elio and Merry!