Energetics of the Eukaryotic Edge 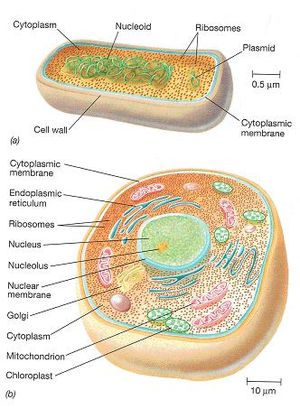 Typical prokaryotic (a) and eukaryotic (b) cells. Source

The most conspicuous feature in the landscape of cell evolution is the tremendous rift that separates eukaryotes from prokaryotes. This is not apparent at the level of ribosomal RNA sequences, or of molecular biology in general, but leaps to the eye of anyone intrigued by form, function and evolutionary potential. Prokaryotes have been biochemically most inventive, and found access to all the practicable energy sources our planet has to offer. It’s a good rule of thumb that, if a chemical reaction yields sufficient energy to support life, a prokaryote exists that exploits it. But when judged by their morphology and organization, prokaryotes seem to have advanced little beyond their fossil ancestors of 2 to 3 billion years ago. Some, it is true, have attained structural and behavioral complexity beyond the norm: cyanobacteria and planctomycetes with their internal membranes come to mind, and so do myxobacteria with their elaborate fruiting bodies and wolf-pack hunting habit. Still, these pale by comparison with even the plainest of eukaryotic protists, whose cells are typically a thousand times larger and stuffed with functional machinery. It is almost seems as though the prokaryotes made repeated starts up the ladder of complexity, but always fell short. By contrast eukaryotes, despite their meager metabolic repertoire, burst whatever constraints hampered prokaryotes to experiment with the opportunities afforded by greater cell size and more elaborate organization. Just what is it that made the eukaryotic mode of life so much more “evolvable” than the prokaryotic one?

Evolvability is an abstract term that refers to “the capacity to generate heritable, selectable phenotypic variation” (1), and sometimes more broadly to the propensity to evolve novel structures (2). Marc Kirschner and John Gerhart, whose definition I have just appropriated, credit the conspicuous evolvability of metazoa to the flexibility of the developmental processes that mediate between genotype and phenotype. Loose reins also rank among the significant differences between prokaryotic cells and eukaryotic ones: as a rule, the latter have many more genes and much extra DNA, more tolerant regulation of gene expression, many more moving parts and a more fluid physiology. These are surely important differences, but they look like consequences of the distinctive evolutionary strategies pursued by the two kinds of cells, rather than the cause thereof. Nor does it make sense to attribute the difference to some singular and critical invention, such as nuclear membranes or linear chromosomes. Though characteristic of eukaryotic cells, both are found in some prokaryotes as well; even endocytosis has recently been documented in planctomycetes (3).

A more convincing argument links the gulf that divides prokaryotes from eukaryotes to their distinct ways of organizing the production of useful energy. In prokaryotes energy generation is a function of the plasma membrane, whereas eukaryotes assign it to specialized components, the mitochondria and chloroplasts. This greatly expands the membrane surface available for energy transduction by ion currents, while freeing the plasma membrane for other tasks. However, as Nick Lane and William Martin explain in a stimulating paper (4), this is just the beginning of the story, for that anatomical difference has unexpected evolutionary implications. In prokaryotes, the energy generated by each individual cell supports the output of its own genome; as much as three quarters of that energy is required just to express genomic information by way of protein synthesis. By contrast, in eukaryotic cells the energy produced by hundreds or even thousands of mitochondria, each one a prokaryotic power pack, is put at the service of a single central genome. In consequence, a eukaryotic genome governs far more energy than a prokaryotic one. This allowed eukaryotic genomes to expand, laying the foundations for the spectacular difference in cellular complexity. Lane and Martin argue that the rise of the eukaryotes was due to the acquisition of mitochondria at a very early stage in their evolution; and furthermore, that the only way structurally and functionally complex cells could have made an appearance was by enslaving endosymbionts.

Let a few numbers taken from that paper bolster the thesis. When expressed on the basis of mass, the mean metabolic rates of aerobic eubacteria and protozoa are not very different: 0.19 and 0.06 W/g, respectively (one watt corresponds to one joule per second). But their cellular masses are very different indeed, typically 2.6 x 10 -12g for the bacterium and 40,000 x 10-12 g for the protozoan. In consequence, a protozoan cell has much more power at its command than a bacterial one: 2300 pW per cell, compared to 0.49 pW. Eukaryotic cells made use of that abundant energy to expand their genomes by orders of magnitude: the mean haploid DNA content is 6 megabases for a prokaryotic cell, 3000 megabases for a protozoan. (mean gene numbers are 5000 and 20,000, respectively, though both prokaryotic and eukaryotic genomes vary over a wide range). Even so, the energy available per gene is far greater for eukaryotes than for prokaryotes, 57 fW versus 0.03 fW per gene (other ways of expressing the difference make the disparity even larger). The mitochondria that power a eukaryotic cell still harbor a minimal genome, a remnant of the genome that came in with the ancestral endosymbiont; most of those genes were either lost or transferred to the host’s nucleus. Taking organellar genes into account makes little difference to the estimate of the power available per gene. Evidently, eukaryotic cells have “energy to burn”, more than sufficient to evolve many new protein families, to explore sophisticated ways to regulate their production and put them to work in elaborate physiological processes that would be beyond the means of prokaryotic cells.

Lane and Martin draw an instructive comparison between the energy budgets of a protozoan cell and a giant prokaryote, such as Epulopiscium fishelsonii, several times the size of Paramecium. A cell of Epulopiscium is a consortium of some 200,000 full-fledged nucleoids, each reliant upon a share of the energy generated by the communal plasma membrane. Reproduction requires the cell to duplicate 760,000 megabases of DNA, compared to 6000 megabases for a protozoan cell of comparable size. Epulopiscium obviously generates sufficient energy to reproduce, but will have none to spare on a quest for structural and functional complexity.

Could one imagine some way for prokaryotes to compartmentalize their energy production in small pods, and thereby augment the genome’s power supply without going to all the bother of domesticating endosymbionts? Yes, one could, but bacteria have not followed that path, and Lane and Martin argue that in reality no such option was available. The reason is that the small genomes retained by both mitochondria and chloroplasts perform an essential function. Maintaining a steady flux of electrons through the respiratory (and photosynthetic) redox chains requires the cell to make adjustments and repairs to individual organelles as needed, and that can only be done under the control of a genome localized to the particular organelle (5). That kind of architecture can only be achieved by starting with endosymbionts, enslaved and put to work as components of a larger community.

These ideas have implications for one of the thorniest issues in cell evolution, the origin of eukaryotic cells. In the conventional view, mitochondria came late into a phagocytic cell, descended from the eubacterial stem, that was already well on its way to attaining eukaryotic organization (6,7). Lane and Martin reject that position in favor of the hypothesis that the first step in eukaryogenesis was the fusion or merger of an archaebacterium with a eubacterium (8,9). The former made large contributions to both the cytoplasm and the nuclear genome, the latter became the precursor of mitochondria, and their increasingly intimate partnership produced the eukaryotic cell. An essential element of their thesis is that mitochondria came early and were a prerequisite to the evolution of eukaryotic organization. I must reserve judgment about parts of this proposal: I have always doubted that merger of prokaryotic cells, and would note that an early acquisition of mitochondria is entirely consistent with Carl Woese’s original view that the progenitor of the eukaryotes represents one of the primary lines of cellular descent. The primordial community of prokaryotes would surely have had a niche for some sort of primitive scavenger or predator (presumably related to the Archaea), which would make the perfect host for endosymbionts (10); we proud eukaryotes must acknowledge humble ancestry! Be that as it may (and we will probably never know for sure), the thesis that mitochondria came early and were required for the evolution of the full eukaryotic order has, to my ears, the ring of an important truth.

Let me not leave those evolvable eukaryotes without noting that the role of energetics in their emergence was permissive, not prescriptive: a generous supply of energy made great things possible, but mandated none of them. We are still obliged to specify the features of eukaryotic organization that natural selection favored, and the molecular inventions that marked the way. That task has not yet been fully accomplished, but the argument that predation based on phagocytosis is key to the rise of the eukaryotes (6,7) seems to me sound. Prokaryotes, by contrast, are constrained by limitations on the energy available to the genome, which bent their evolution into quite different channels. In their case, natural selection favored small and spare cells with streamlined genomes, rapid reproduction, little superfluous DNA and tightly disciplined regulation of gene expression. Marching under the banner Small is Beautiful they flourished, multiplied and inherited the earth. From any point of view except that of a eukaryotic chauvinist, it’s still a prokaryotic world.