« My Geological Ignorance | Main | Of Terms in Biology: Colloids » 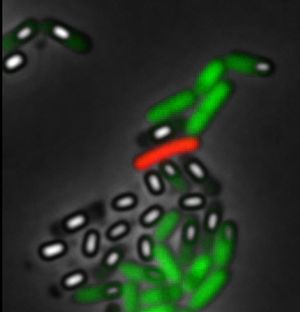 Click here to download a movie from the Elowitz lab showing different behaviors within a clonal population of Bacillus subti­lis in relatively homogeneous conditions. Here, the cells express a green fluores­cent protein when growing normally, but turn on a red fluorescent protein when differentiating into a transient competent state. Some others differentiate into resil­ient spores (white objects). Source

Bacteria that are born genetically equal aren't necessarily the same. The same genome, residing in cells side-by-side in the same medium in the same flask, does not guarantee the sa­me phenotype. One example that comes to mind is the per­sisters in E. coli populations – the small number of cells that spontaneously stop growing. If the population is hit by β-lac­tam antibiotics, those cells escape death. Similarly, under lab conditions that trigger genetic competence in B. subtilis, only a small fraction of the cells make the switch to compe­ten­ce.

B. subtilis cells growing in a rich growth medium offer yet an­other example. Here genetically identical cells comprise two distinct types. Most are flagellated and actively swimming about as individuals, while a minority have no flagella and form long chains. The game is different in cells in the statio­na­ry phase where virtually all of the cells are found in long chains, bound together by an abundant matrix. Losick, Kolter, and colleagues have been working with this system for some years (for earlier papers, click here and here) seeking to de­ter­mine how such bimodal cell populations are established and maintained in growing cultures.

Others have approached this question from a theoretical point of view asking what sort of a regu­latory "circuit" would it take to produce robust bistability. In other words, how might a cell, using a simple system employing but a few regulatory genes, be able to operate in either of two distinct states. In 2000, Gardner et al. started with a model for a bistable network (Figure 1) and then at­tempted to create such a circuit in E. coli. (A simple system this may be, but conveying it in words is not so simple. I suggest you wrap your mind around the diagrams first.)

Figure 1. A model of a simple toggle switch. Redrawn from Source

When Protein B is present in the cell, it binds to and blocks Promoter A, thus repressing expression of Gene A. As a result, when Protein B is present, Protein A is not made and soon the cells will be depleted of it. Such cells are said to be "locked" in the stable B State. Cells could instead be in an alternative state, the A State. Here, they would con­tain Protein A, which blocks the synthesis of Protein B. These two states are mutually exclusive. Either a cell transcribes Gene A but not Gene B, or vice versa. What I'm calling a "gene" here might encode an entire operon or a regulatory factor that affects numerous operons. Therefore this would be a potential mechanism whereby some cells could have their motility genes turned off and their matrix genes turned on, or vice versa.

Figure 2. An inducer can flip this toggle switch. Redrawn from Source

In the case of a growing culture of B. subtilis, an individual cell in either state can give rise to a mixed population. This means that we also need some way for a cell to switch states. One possibility is by a stochastic mecha­nism triggered by the random fluctuations inherent in gene expression in any cell. The rate of transcription of a gene will vary somewhat by chance – sometimes faster, sometimes slower ­ depending on what else might be going on. If the bistability is robust, the cell will not flip randomly between states due to such fluctuation. How­ever, bistability comes in all gradations. Suppose it takes 50 molecules of Protein A to maintain a cell in the A State. If the cell normally contains several hundred copies, minor fluctuations in its synthesis are unlikely to kick the cell into the B State. However if the cell typically has only 60 co­pies, some cells would likely fall below the threshold occasionally.

Figure 3. Protein A (SinR) represses the matrix genes and also gene B. Protein B (SlrR) repres­ses gene A and also combines with Protein A to repress the motility genes.

Alternatively the cell could make use of a programmed mechanism. These are more predictable and can convert an entire population to the same state. Here the trigger might come in the form of a specific inducer synthesized in response to an environmental signal (Figure 2). Sup­pose that, when starved, cells in the B State make Indu­cer A. Inducer A binds to Protein B, thus preventing it from doing its usual job of repressing Gene A. This would turn on synthesis of Protein A – and switch the cell to the A State. Moreover, this would happen in virtually every cell in the population given the same environmental signal. Gardner et al. set to work and constructed this sort of a "genetic toggle switch" in Escheri­chia coli. Their synthetic switch worked. 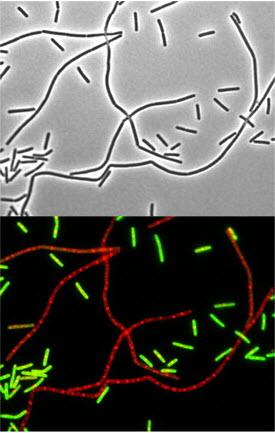 In a recent paper, the Losick and Kolter labs present data indicating that B. subtilis uses a stochastic toggle switch during exponential growth to maintain a bimodal popu­la­tion in which most cells are motile but a few are sessile and chained together within an extracellular matrix. In a flask of exponentially growing B. subtilis, the individual motile cells contain a protein (we'll call it Protein A) that turns off the genes required to make the biofilm matrix. Protein A also blocks the synthesis of another important regulatory protein that we'll call Protein B. If Protein B were present, it would turn off the motility genes. The majority of the cells in our flask make Protein A, have little Protein B present, and therefore are motile, indivi­dual, and do not synthesize matrix components.

Although most cells in the population are individual and motile, some are found in chains. Why is there any chain­ing? In the authors' words: We propose that the switch is activated stochastically by noise in the expression of these same components. In other words, given even a brief pulse of Protein B synthesis, the system flips over to the high Protein B, low Protein A state where the motility genes are turned off and matrix genes are turned on. This apparently does happen, but only rarely, since most of the population is motile. However, if the population is transferred to a poor growth medium, essentially all the cells shift to biofilm formation. This response to environmental stress is orchestrated by the pro­grammed production of an inducer that turns on the synthesis of Protein B.

The mechanism by which Protein B promotes chaining involves a protein-protein interaction – a new twist on our basic model. Protein B interacts with Protein A to form the A•B heterodimer. This heterodimer does two things: (1) It ties up the Protein A that is present so that the matrix genes are expressed (and so that still more Protein B is made); (2) It turns off the transcription of the motility genes.

This B. subtilis story is but one example of what appears to be bacterial bet-hedging. In a 2008 re­view article about this tactic, the authors note: Under challenging conditions, the production of off­spring with variable phenotypes ensures that at least one offspring will be appropriate (fit) under a gi­ven situation. This is a risk-spreading or bet-hedging strategy… and it's a good bet that more such stories are yet to come.