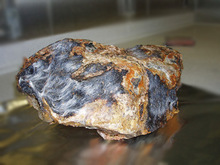 A rock is being eaten away by chemosynthetic bacteria. Source

Some years ago, I was standing on an overlook of the badlands in the Anza-Borrego California desert, explaining to a friend that the layers of red rocks in front of us were derived from the Grand Canyon, somewhat proud that I could exercise some of my extraordinarily limited knowledge of geology. It turned out that it was pure nonsense, the rocks being from a totally different era. Such is my ignorance of the planet on which I am a passenger.

But I expect that I’m not alone, that others also can lay claim to geological illiteracy. It was not always this way. Until the early 20th century, biologists were expected to know something about geology, and many knew a great deal. This has fallen by the wayside and rare is the biologist who can name the era when copious oxygen appeared in the atmosphere, when Pangea started to break up, when flowering plants began to diversify, or when dinosaurs dominated. This is not good. With the recent flourishing of microbial ecology and evolution, geomicrobiology has become a field of importance for all those interested in what makes the Earth tick. Many examples, including readily appreciated ones, attest to the pervasive role of microbes in this planet’s metabolism, from the White Cliffs of Dover to New Mexico’s Carlsbad Caverns. My way of atoning for my sins is to subscribe to the table of contents of the journal Geobiology. In the current issue, I found a paper with the curious title: Twelve Testable Hypotheses on the Geobiology of Weathering. It has 27 authors from all over the United States plus a lone one from Great Britain. 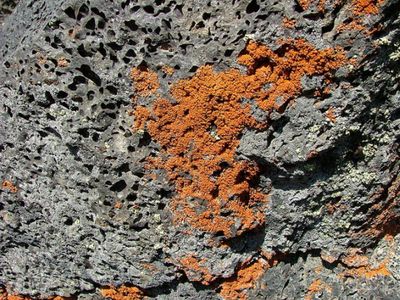 Weathering of lava by lichens. Source

First, I had to look up 'weathering.' Here is a useful definition: Weathering is the breaking down of Earth's rocks, soils and minerals through direct contact with the planet's atmosphere. Weathering occurs in situ, or "with no movement", and thus should not be confused with erosion, which involves the movement of rocks and minerals by agents such as water, ice, wind, and gravity.

The paper is concerned in good part with changes to this Earth wrought by humanity. So pervasive is this effect that this era could be called the 'Anthropocene.' Much weathering is, in fact, due to microbial activity; searching for 'microbe' in the article yielded 32 matches. It would be interesting to know how many of the authors are microbiologists. The interface between the inanimate and the living occurs over a huge area known as the Critical Zone. As the authors say: …this [is the] realm, where rocks meet life.

The hypotheses discussed here range widely. Some sound familiar, e.g., Hypothesis 1: Solar-to-chemical conversion of energy by plants regulates flows of carbon, water, and nutrients through plant-microbe soil networks, thereby controlling the location and extent of biological weathering. Others seem challenging, e.g., Hypothesis 3: On landscapes experiencing little erosion, biology drives weathering during initial succession, whereas weathering drives biology over the long term. Yet others have a scary aspect, e.g., Hypothesis 12: Biogeochemical properties impart thresholds or tipping points beyond which rapid and irreversible loss of ecosystem health, function, and services can occur. These are weighty and somber matters that require careful consideration by all. And yet, for all their gravitas, these topics have a way of appealing to the playful mind. Had I indulged my curiosity sooner, been a more informed passenger, I could have delighted more often in the geobiological phenomena playing all around me. As it is, I look back and feel wistful about having missed out on much of the fun.