Life should be like the precious metals, weigh much in little bulk
— Seneca (Roman philosopher, mid-1st century AD) 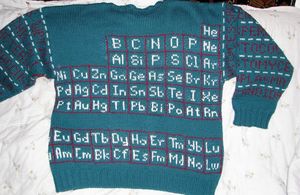 Now that news of the arsenic-eating bacteria has saturated cyberspace, the airwaves, and even old-fashioned newsprint, we step back to raise a larger question: Why have so few elements from the periodic table made it into living things? You seldom hear about anything past the first few rows in the table. Turns out this is a gross oversight. Many more elements, previously unsuspected, are to be found in a large number of metalloproteins. So, move over, arsenic and make room for other elements.

Until recently, the topic of metal ion cofactors and metalloproteins has been something of a biochemical stepchild. For sure, some researchers have avidly pursed it. However, in most cases, the presence of metal was revealed serendipitously after the protein was purified. 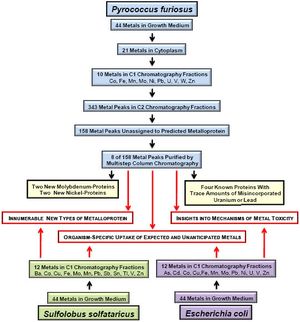 But what if one set out to cast a wide net for metalloproteins? The authors of a recent paper did just that by examining the proteins of the archaeon Pyrococcus furiosus (a super-hyperthermophile that the authors call “a prototypical microbe,” an interesting point of view that we salute). They found several hundred such proteins containing an unexpected assortment of metals. Analysis of two additional organisms, Escherichia coli and Sulfolobus solfataricus, revealed the species-specific assimilation of yet more unexpected metals — cadmium, arsenic(!), uranium, and nickel in E. coli, and both tin and antimony in S. solfataricus (see Fig.).

To ensure that the metals were not contaminants, the researchers went to great lengths, including purifying proteins by a combination of chromatographic techniques. They then used a fancy and highly-sensitive type of mass spectrometry called inductively coupled plasma mass spectrometry to determine the metal content of the proteins. Together these techniques allowed for much faster and more precise identification of metalloproteins than had been previously possible. Even the existing bioinformatics program called InterPro-Metal had turned out to be of only limited help.

One-third of all proteins are “metallo-proteins”, chemical combinations of protein atoms (car-
bon, nitrogen, oxygen, hydrogen, sulfur) with ions of metals such as iron, calcium, copper, and zinc. Source

Using these techniques to characterize the chromatographically purified proteins of P. furiosus they found 343 metal peaks among their protein fractions, 158 of which did not match any known metalloprotein. Some of these unassigned peaks contained metals known to be present in proteins of this organism (e.g., cobalt, iron, nickel, tungsten, and zinc in about half of the peaks) while others possessed unsuspected metals (e.g., lead, manganese, molybdenum, uranium, and vanadium in most of the other half of the peaks). In total, the authors found that this organism contains 21 of the 53 metals analyzed. Most abundant were metalloproteins containing iron and zinc (97% of the total). Note that no extra metals had been added to the growth medium but they were surely present in trace amounts. Taking a page from the recent report on arsenic usage by a bacteria, growing the organisms in increasing amounts of these metals may lead to interesting results. With elementary attention to elemental analysis and interpretation, this should not lead to controversy.

Why should we care that these proteins contain unexpected metals? The authors illustrate several reasons, such as the finding of zinc and iron-sulfur in DNA repair proteins that are relevant to human cancers and the observation that proteins made by recombinant technology may be lacking essential metals. One can add much to this list. But the message is a general one: there is much more to the world of metalloproteins than we had envisaged.