« We’ve Figured It Out! | Main | My Geological Ignorance » 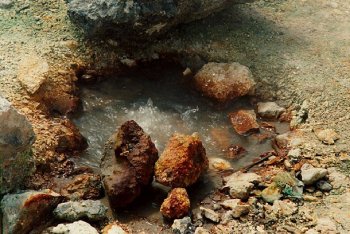 How can thermophilic bacteria not only survive, but actually proliferate, at elevated temperatures that would be lethal to all other forms of life? After extensive research during the past five decades, this question has been answered in a general way, but the molecular basis for this unusual capability has not been clearly resolved. Thermophiles [I use this term to include both thermophiles (optimal growth temperatures of 50-70 °C) and hyperthermophiles (optimal growth temperatures >80 °C)] synthesize intrinsically thermostable cellular components and/or extrinsic stabilizing factors (chaperonins and polyamines, for example).

Most proteins isolated from thermophiles are thermostable and the mechanisms underlying this property have been extensively studied. These investigations have their roots in the pioneering work on the heat stability of hemoglobin and ferredoxin carried out by Perutz in 1975. Some of the strategies reported to bring about protein thermostability include higher levels of charged amino acids on the protein surface that promote ionic interactions, amino acid preferences, hydrophobic cores, aliphatic side chains, disulfide bridges, and solute accumulation. It is obvious from these studies that a universal mechanism to achieve protein thermostability does not exist. The complexity of this problem is highlighted by differences that appear to be in play for multimeric proteins versus single polypeptide chains, for soluble proteins versus membrane proteins, and for proteins from thermophiles versus proteins from hyperthermophiles. 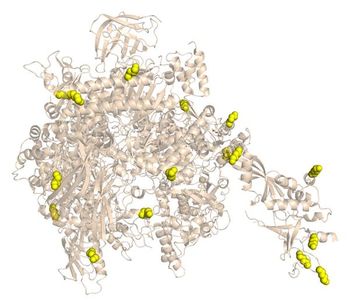 Mapping of lysine methylation sites (indicated in yellow) on the crystal structure of the RNA polymerase from Sulfolobus shibatae, a hyperthermophilic, acidophilic crenarchaeon. Source

There is also evidence for the involvement of a post-translational event. Botting and coworkers expand on reports suggesting that lysine methylation may play an important role in the heat stability of proteins from hyperthermophilic Crenarchaea. Using mass spectrometry, they identified 21 singly-methylated lysines across 9 subunits of the RNA polymerase isolated from Sulfolobus solfataricus. The modified lysines occurred primarily in alpha-helices and near hairpin turns. In addition, the methyl transferase involved did not display the sequence specificity characteristic of the SET domain methylases that act on histones in Eukarya. A proteomic study of Thermoproteus taxis revealed 52 methyl-lysines (6 of which were dimethylated) in 30 different proteins. In contrast, a survey of the proteomes from various Euryarchaea (e.g., the halophile Haloferax volcanii, the hyperthermophiles Thermococcus gammatolerans and Pyrococcus furiosus, and the mesophile Methanococcus maripaludis), did not reveal lysine methylation.

Methylation of lysine increases the pKa of the side chain, thus allowing a stronger ionic interaction to take place, and also changes the hydrophobicity and solubility of the protein. There are many examples of lysine methylation improving the thermostability of proteins, such as in the commercially-produced methylated bovine trypsin used for protein digestion at elevated temperatures. More data will be required to firmly establish whether methylation of lysine is an adaptation to the hyperthermophilic lifestyle specific to the Crenarchaea.

Despite such tantalizing hints, the basic questions regarding extreme thermal stability of proteins remain elusive. Keep in mind the claim that life is possible at 121°C. Is this a different kind of biochemistry, one that requires pondering about unexpected and perhaps astonishing properties of macromolecules? Or will “regular” biochemistry suffice, provided we obtain more data?