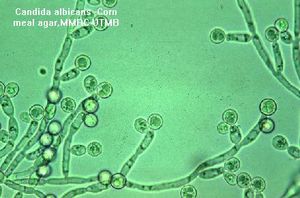 Who hasn't heard of Candida? It’s one of the most common fungal pathogens of humans. It is also a commensal organism, living mainly in people’s gastrointestinal tract. The diseases it causes range from a fairly mild vaginitis to deadly opportunistic systemic infections. In fact, Candida species are a major cause of nosocomial bloodstream infections. Candidas are close relatives of the baker’s yeast, Saccharomyces cerevisiae, but live by very different rules.

Candida has been the focus of intense research at the molecular level for only the past fifteen years or so, and it has not been an easy road. These organisms, it turns out, have a slightly different genetic code than most others, rendering the standard molecular tools less useful. Additionally, Candida does not exhibit the mating and spore formation behaviors of its cousins Saccharomyces cerevisiae and Aspergillus, which made them popular organisms for fast-moving molecular genetic studies. But the development of new tools and a growing community of researchers have revealed in the past few years that Candidahas evolved its own unorthodox mechanisms and lifestyles that probably greatly enhance its ability to adapt to changes in its host environments.

When instability is a good thing 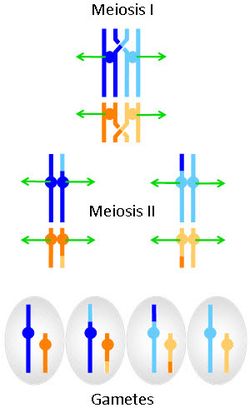 Figure 1. Meiosis. In meiosis I, chromosomes pair and recombine with their homologous partners. The tether provided by recombination allows the chromosomes to attach to microtubules as a unit, such that they will be pulled apart at the meiosis I division. Meiosis concludes with the production of gametes that contain one copy of each chromosome. The recombination results in the shuffling of DNA regions between the homologous partners. (Credit: Dean Dawson)

Most organisms expend much cellular capital to maintain chromosome stability. Mutations in human genes involved in preventing DNA damage can result in cancer. Indeed, most human solid tumors contain broken, rearranged, or duplicated chromosomes (reviewed here). But chromosome instability does not always have to be bad and, at least for Candida, may actually be beneficial for adaptation to a changing environment. For example, Candidaexperiences frequent changes in chromosome number. That this might be to its advantage became clear when it was shown that strains adapt to certain agents either by losing a chromosome that carried a sensitizing gene or by duplicating a chromosome carrying a gene that would give it an edge in coping with the agent (reviewed here).

Now, an analysis of the chromosomes carried by forty clinical isolates of Candida glabrata has made a strong case that chromosomal instability is Candida’s way of life. The isolates exhibited tremendous variability in chromosome structure. The C. glabrata karyotype includes thirteen chromosomes that can be separated by gel electrophoresis. The DNA composition of each can then be evaluated by hybridization to DNA probes. The chromosomes of the forty isolates were tested with nearly a hundred probes to see if, for each isolate, the chromosomes had maintained their basic structures. They hadn’t. The isolates carried translocations, duplications, inversions and new chromosomes — duplicated regions of normal chromosomes that had been capped with telomeres. A veritable zoo!

So, what questions arise from such dramatic findings? The analysis offers us an “after” snapshot but we don’t know what these strains looked like before infection. C. glabrata is clearly permissive of chromosomal changes. Systematic studies will now be required to determine the mechanisms for chromosomal rearrangements and the frequency with which they happen. But even more central is the question: does C. glabrata benefit from chromosomal instability and, if so, how? The changes observed could affect gene expression in many ways, most directly by increasing the copy number for blocks of duplicated genes. The authors point to several genes on duplicated chromosomal regions that one could imagine would provide a survival advantage in the human host. More importantly, they showed that isolates bearing a newly-formed chromosome were resistant to high doses of the antifungal fluconazole. The same isolates grown in laboratory growth medium without the drug lost the extra chromosome. Thus, the newly formed chromosome appears to provide a growth advantage when the organism is subjected to the drug but apparently provides no advantage for growth in laboratory medium. Without the drug pressure, cells that lose the new chromosome outcompete those that keep it. 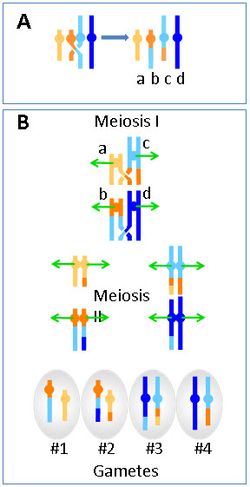 There are potential immediate problems from chromosome rearrangement, problems such as gene disruption and altered gene expression due to changes in copy number. Subsequently, rearrangements may also affect meiosis. The orderly sorting of the chromosomes in meiosis is based on sequence homology and produces gametes with exactly one copy of each chromosome (Figure 1).

The advantages of unorthodox sex

The apparent advantage of sexual reproduction is drilled into us in high school (one way or another). The meiotic process with its recombination and random assortment of chromosomes yields gametes with fresh, and possibly beneficial, combinations of genetic material. Until recently Candida species were often described as being asexual, but the results of recent work suggest the contrary, although their sex is unconventional. Standard sexual reproduction involves generating haploid gametes, through meiosis, that fuse to create diploid cells.

Candida does things its own way by fusing two diploid cells to generate a tetraploid zygote with double the normal chromosomal content. These cells then go through a chromosome loss process, without undergoing meiosis, until they arrive at a final stable diploid chromosome number (Figure 3). It is not known whether there is some regulation of the chromosome loss, or instead, if it is a random process in which cells with the best chromosome combinations for survival outcompete the others. Like conventional sexual reproduction, the cell fusion and chromosome loss process used by Candida results in progeny with new chromosome combinations, albeit by a novel mechanism. 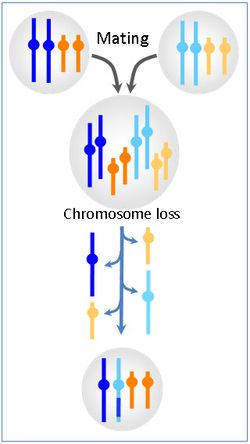 Figure 3. Reproduction in Candida through cell fusion and chromosome loss. Candida generates descendents with new genetic composition by first fusing cells, then losing chromosomes until a stable chromosome set is achieved. Recombination between homologous chromosomes can occur prior to chromosome loss. The ability of cells to mate depends on a number of factors, including mating type and whether the cells have achieved a mating-competent state. Candida mating and the chromosome loss process are reviewed here.(Credit: Dean Dawson)

There is still much to learn about this sort of unorthodox reproduction. Why does Candida choose such unconventional sex? How is this regulated? How many stable chromosome configurations are there? It is known that some homologous recombination can occur during Candida reproduction, but how much and how it is regulated is still a mystery. What is clear is that Candida has evolved a process that provides the benefits of mixing genomes but bypasses the need to perform meiosis. Without the constraints of meiosis, Candida is liberated to rearrange its chromosomes at a torrid pace. This facilitates rapid adaptability without compromising the ability, later, to transmit genes through an unorthodox reproductive process.

An interesting question is: which came first, genome plasticity, which would poison meiosis? or the loss of meiosis, which would permit genome plasticity? Clues may lie in the genome. Sequencing projects are now evaluating the remnants of meiotic genes that still exist in Candida genomes with an eye toward when, and how, meiotic ability was lost or dispensed with. 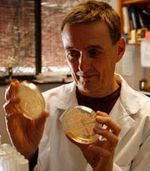 Dean Dawson is an Associate Member of the Cell Cycle and Cancer Biology Research Program at the Oklahoma Medical Research Foundation.