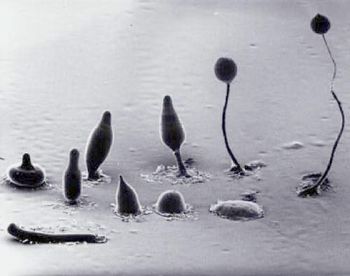 A scanning electron micrograph showing the various stages of transformation of Dictyostelium. Each body represents a different stage in the process. Hundreds of thousands of single cells aggregate to form a migrating “slug” (lower left). Once the slug comes to a stop, it gradually elongates to form the fruiting body. [Courtesy of M. J. Grimsom & R. L. Blanton, Texas Tech University]. Source

The practice of agriculture is not limited to humans: ants, termites, and snails all grow fungi, and who knows who else do something similar. But not many have claimed that such activities are to be found among simpler organisms. Now we have a report that slime molds have also gone down the road to agriculture. Dictyostelium discoideum, the best studied of the cellular slime molds, is a social amoeba that thrives by grazing on bacteria. Given ample bacterial food, these organisms grow as single cells. When food becomes scarce, they aggregate into pretty, differentiated fruiting bodies (called sorus, plural sori) consisting of a round mass of spores held up by a stalk. The spores eventually become dispersed, to repeat the cycle at a new site. The entire epic can be viewed in a dramatic documentary available here. (This movie is narrated in German, giving you the opportunity to hone your skills in that language.)

What is new here is that about one third of 35 clones of this species collected in the wild do something extra, namely they carry bacteria with them as they differentiate. They even include them within their sori — like packing a lunch, sort of. (The number of bacteria per sorus of different clones is not reported.) Once released, the spores have the ready opportunity to enjoy the source of food providently supplied for them. But non-farmers eat up all the available food before differentiating, whereas the farmers leave about half of the bacteria uneaten. It’s a little bit like humans not eating a whole grain harvest, but carrying some along when migrating to provide seeds for future sowing. 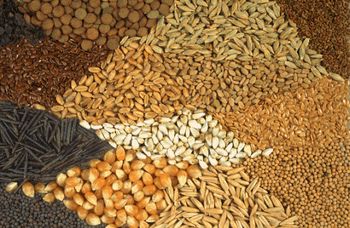 This sounds mighty prudent, but it comes with costs. The farmer amoebae don't travel as far before differentiating, thus are less likely to make it to a locale with more abundant food. And their sori contain fewer spores. If the spores find themselves in places with abundant bacteria, the advantage of carrying the bacteria along may disappear entirely. This was the case when they were grown on agar plates with plenty of food in the form of their preferred bacteria. However, in experiments closer to real-life using two arboretum soil samples, the farmers did better than the non-farmers, and produced more spores. The authors suggest that clones of this species consistently employ one of these two strategies, either farming or not farming. Each may have an economic advantage, just like with people. Not eating all your seeds is prudent for the future, but eating them all makes you better fed today.

The authors also tested a kind of “Koch's postulate.” They “cured” farmers of the bacteria using antibiotics. They then grew these axenic organisms in the presence of bacteria and, sure enough, all the farmers regained the bacteria, while the non-farmers still did not become farmers. How this happens is still a mystery. What enables farmers to gather the bacteria and carry them along on their developmental trip? 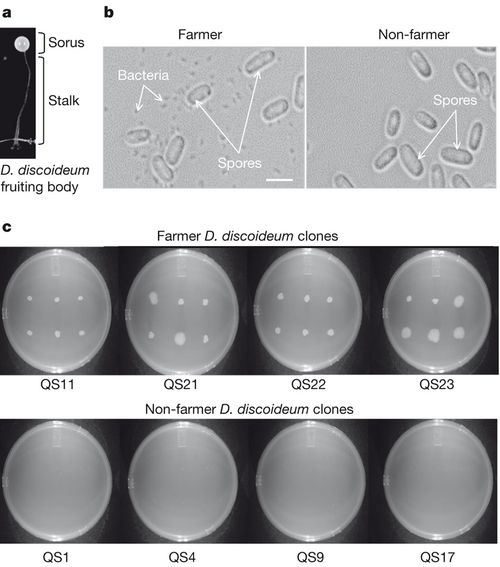 Fruiting body structure and sorus contents from farmer and non-farmer D. discoideum clones. A: The fruiting body is composed of the sorus, which contains the fertile spores, and the stalk, which holds the sorus aloft to facilitate spore dispersal. B: Bacteria and D. discoideum spores are present in the contents of a farmer sorus (left) but only spores are present in the contents of a non-farmer sorus (right). Bar = 5 µm. C: Sorus contents for six random, individual fruiting bodies from each of four farmers and four non-farmers were spotted on individual nutrient agar plates. All farmer sorus contents showed bacterial growth, whereas no bacterial growth was observed in sori from non-farmers. Plates were photographed after two days of growth. Source

One can tell which strains carry bacteria, and which don’t, by placing sori on an agar plate where the bacteria can grow. What kinds of bacteria did these authors find? Chiefly, what grew out were species of soil-dwelling genera such as Burkholderia, Stenotrophomonas, Enterobacter, and Flavobacterium. But we still have lots to learn.About half of these bacteria can serve as food sources for the slime molds, farmers and non-farmers alike. Nothing is yet known about the other half. Note also that many soil bacteria cannot be cultivated and thus escaped their scrutiny.

Now let me pick a nit. Calling this agriculture, even "primitive agriculture" as in the title of the featured paper, seems like a bit of a stretch. In contrast to the tending of the fungal gardens by the ant or termite farmers, these amoebae do not cultivate their bacteria. And the term is rife with anthropocentric connotations that could lead one down a slippery teleological path. Nevertheless their kind of farming does involve multiple changes to enable these slime molds to become farmers. In truth, in this blog we use anthropocentric terminology all the time. But, no matter, this does not detract one whit from a fine paper.

These findings contribute yet another captivating example to the vast panoply of interactions between microbes, one of the leitmotifs of modern microbiology. This work also illustrates a tangential but interesting point. By focusing study on a single model organism, this phenomenon had been missed in the past. It was only when several dozen isolates from nature were studied that “agricultural” practices were found among about 1/3 of them. There is a lesson in this as well.