by Elio and Mark (Martin)

We asked friends and colleagues to point to papers published in 2010 that tickled their fancy. Here are their responses.

An article published in 2010 that strikes me as particularly noteworthy is ATP control of dynamic P1 ParA-DNA interactions: a key role for the nucleoid in plasmid partition by Vecchiarelli, Han,Tan, M Mizuuchi, Ghirlando, Biertümpfel, Funnell, and Mizuuchi. 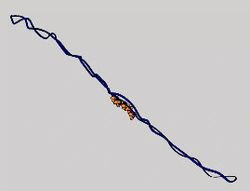 Click here to view an animation of the action of ParC and Par M in plasmid R100 segregation. Source

The orderly segregation (partition) of plasmids and many bacterial chromosomes is achieved with the aid of a par operon of two structural genes and a site on the DNA to which one of the two Par proteins binds. The other Par protein, involved in autoregulation of the operon, is an ATPase of either the Walker type or actin-like. Despite the simplicity of these systems, their mechanisms of action have long remained obscure. Partition involving an actin-like ATPase was finally elucidated in a striking paper published in 2007 by Garner, Campbell, Weibel, and Mullins. Only in 2010 was a cogent explanation offered for the mechanism of genome partition mediated by the Par system with an ATPase of the Walker type.

The cited paper is not easy reading. Were the mechanism simple, it would have been discovered long ago. The model makes use of a reaction-diffusion mechanism of pattern formation and a careful analysis of spatial and kinetic parameters. I believe that this kind of analysis will be required to elucidate the mysteries of development. This work is a reminder of biology's debt to Alan Turing, who understood that diffusion can play a decisive role in forming as well as in disrupting patterns.

A related paper by Hatano and Niki was recently published in the same journal.

Although many of the papers I have read recently are excellent, they don't stand out as much as the two articles in the latest issue of Microbe on Charles Darwin's contributions, one by Kolter and Maloy and the other by Lenski. 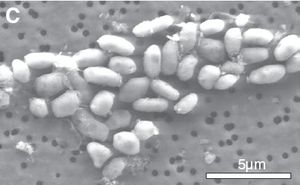 Love it or hate it (well, most microbiologists seemed to hate it), the Wolfe-Simon et al. 2010 paper about the crazy arsenic bug deserves some kind of recognition. It’s rare to see environmental microbiology make that big of a splash in the general press. Too bad they didn’t treat their DNA with protease before analyzing the arsenic content. Hopefully it won’t turn out to be a bust.

(When challenged about this choice, David had this to say: What I love about microbes is that they will exploit the slimmest niche that nature offers them. Provide a thermodynamically-favorable option for making a living, no matter how crappy, and some bug will evolve to use it. I love the possibility that life in the universe could take whatever form the local chemistry demands, and could be nothing like life as we know it.)

Viral and microbial community dynamics in four aquatic environments is the best paper of 2010...but no one understands it. :) 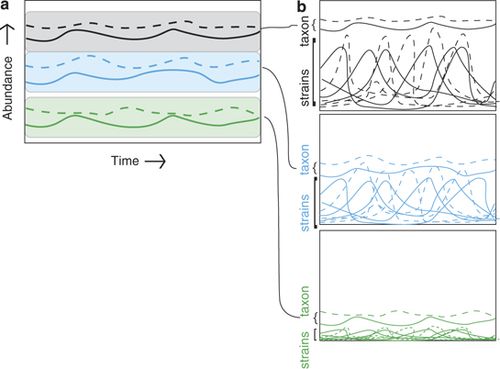 Proposed model for taxonomically and metabolically stable ecosystems. Solid lines = microbes; dashed lines = viruses. (a) Microbial taxa and their co-occurring phage taxa coexist stably over time. (b) Three microbial taxa (Black, Blue, and Green spp.) and their phages are diagrammed separately. Underlying the relatively stable species populations is a dynamic cycling of microbial strains and viral genotypes. This cycling of predator and prey populations is consistent with a Kill-the-Winner dynamic operating at the level of virus-sensitive microbial strains. Source. 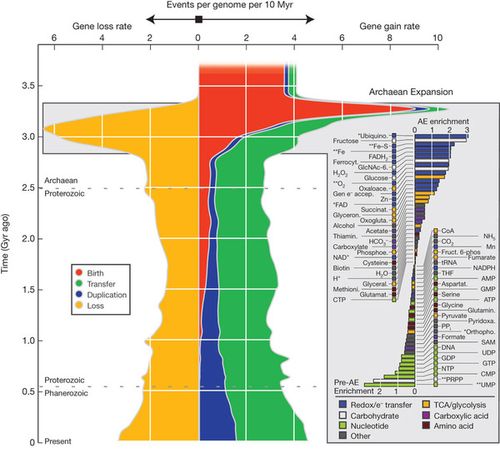 Average rates of gene birth (red), duplication (blue), HGT (green), and loss (yellow) per lineage (events per 10 Myr per lineage) are shown. Events that increase gene count are plotted to the right, and gene loss events are shown to the left. The inset shows metabolites or classes of metabolites ordered according to the number of gene families that use them that were born during the Archaean Expansion compared with the number born before the expansion, plotted on a log2 scale. Bars are coloured by functional annotation or compound. Source

Creation of a bacterial cell controlled by a chemically synthesized genome by Gibson and co-workers from the Venter labs is certainly "particularly interesting." What I like apart from the methodological achievement is the term "creation" in the title. What I did not like was the fuss in the press for the wrong reasons.

Another paper which I believe merits attention is entitled Rapid evolutionary innovation during an Archaean genetic expansion by Lawrence A. David and Eric J. Alm in Nature (Published on line 19 December 2010).The authors traced the history of about 4,000 gene families in deep time. In their method they incorporated the phenomenon of horizontal gene transfer (HGT). They have interpreted their data to mean that rates of gene birth, gene duplication, gene loss and HGT vary over geological timescales. They postulated an increased gene family birth roughly about 3,000 billion years ago and which they termed Archaean Expansion. New genes seem to be involved in electron-transport and respiratory pathways. As pointed out by the authors this precedes the increase in oxygen in the atmosphere. I feel this work complements studies involving biofossils and chemofossils.

Click here to view a movie of the first 100 minutes of a representative time lapse experiment showing 12 fields. Source

Among many very interesting papers appearing in 2010, I want to especially mention the paper of Wang, Robert, Pelletier, Dang, Taddel, Wright, and Jun entitled Robust Growth of E.coli. The authors employed a microfluidic device that enabled them to follow the growth and division of single bacterial cells over a long period of time. The results are surprising and serve as a nice follow up to the work of the “Maaløe school."

For me the most interesting article in 2010 is that of Jun and Wright entitled Entropy as the driver of chromosome segregation. The authors try to give a physical answer to the question of bacterial segregation based on the phenomenon of entropic de-mixing of newly replicated DNA daughter strands. This subject refers to a previously discussed topic that was started with the question: Bacterial Mitosis: What's Taking So Long? (The formulation of this question is based on eukaryotic terminology. See the comments on this topic of July, 2007.)

The importance of the present paper is the prediction that, while plasmids need cytoskeletal elements for their segregation, such machinery is neither needed for chromosomal segregation in bacteria nor for chromatid separation in eukaryotes.

Although entropy is a forceful driving force it has no directionality and thus cannot itself bring about segregation. Additional biological conditions have to guide this force. The authors therefore propose the existence of a concentric shell around the nucleoid to where the replisomes and the newly replicated "strings of DNA blobs" are extruded. It is in this outer shell that the daughter strands demix and repel each other by chain-connectivity and volume-exclusion interactions, with the additional help of DNA binding proteins and possibly the transertion process.

We do not know whether such a shell exists. Moreover, initiation of DNA replication may have to occur somewhere within the nucleoid and outward extrusion of the orisome may be a too slow process. We thus must think of an even simpler mechanism that can occur and function inside the nucleoid. Probably, the mechanism should also function under conditions of transcription and growth inhibition. Unpublished observations (with Flemming Hansen) have indicated that during run-off DNA synthesis, regions on the two chromosome arms not only duplicate but also fully segregate to both halves of the nucleoid.

As the authors suggest, measurements of the dynamics of labeled DNA regions using fluorescence correlation spectroscopy (FCS) and possibly also image correlation spectroscopy (ISC) can still be improved and applied on both living cells and isolated nucleoids. I am quite confident, therefore, that it is not "Taking So Long" anymore before we can answer some crucial questions about "bacterial mitosis."

I'd vote for the paper on Drosophila microbes affecting the fly's mating behavior. The story from Eugene Rosenberg's lab came out in PNAS at the end of 2010.
(In fact, Merry wrote about it on STC.)

Detail of the Black Cow Panel in the Main Gallery. Source

I'm fascinated by the idea that by opening up these treasures (in this case the prehistoric drawings in the Lascaux caves) so that we can see and study them, you alter the environment such that the new microbes that grow can destroy the thing you want to study. Kind of hits my two passions in wanting to know about microbiology and wanting to study ancient civilizations.

I also find it interesting that in just the few decades that the caves have been open to the public human pathogens have become part of the flora found in the caves. I found this article  on the microbiology of the Lascaux caves by French, Spanish, and Czech microbiologists to be quite interesting.

From my perspective and interests, the most exciting paper I read this year came from the Danes Lars Peter Nielsen and Nils Risgaard-Petersen. (We just discussed this one in class.) The next was from Zara Summers and colleagues, published in Science a couple of months ago, showing interspecies electron transfer.

I have become increasingly interested in the interactions between microbes and other organisms—a budding (!) sociomicrobiologist, perhaps. We are walking ecologies, in a manner of speaking, and interactions between members of those ecologies is the rule. I have two choices of thought provoking articles published in 2010.

In this remarkable article, it was discovered that Salmonella uses its pathogenic association with host cells during infection to give itself a growth advantage: inflammation of epithelial cells due to T3SS produces reactive oxygen species, which in turn create a respiratory electron acceptor (tetrathionate) that Salmonella can use to compete with nonpathogenic gut microbes. A remarkable microbial detective tale, beginning with observations in the 1920s!

We not only maintain complex communities of microbes on our skin, but those communities reflect our individualities. In a "CSI" meets "Arrowsmith" moment, the authors demonstrate that the skin microbiota can be as individual as a fingerprint, and those "microbial fingerprints" are left whenever we touch a surface.

Frames from a time-lapse movie depicting infection events. At t = 0 (left), two cells are seen each infected by a single phage (green spots), and one cell is infected by three phages. At t = 80 min (middle), the two cells infected by single phages have each gone into the lytic pathway, as indicated by the intracellular production of new phages (green). The cell infected by three phages has gone into the lysogenic pathway, as indicated by the production of mCherry from the PRE promoter (red). At t = 2 hr (right), the lytic pathway has resulted in cell lysis, whereas the lysogenic cell has divided. Source

I'd mention two papers that revisited previously known processes, but now looking at the single cell or single phage level. The first one, by Kenzaka and colleagues, was the basis of my blog post, Promiscuous Bacteria and Playboy Viruses. Significantly, they found that phage can transfer genes to non-hosts, i.e., to bacteria that they can't successfully infect. This makes sense in that many host defenses, such as CRISPRs and restriction-modification systems, do not block injection of phage DNA, but instead abort the infection at a later step. That way the bacterium nets some new genes and/or a free nucleotide lunch.

In my second selection, Zeng et al. dissect the process by which, upon entering a host, individual λ phages choose lysis or lysogeny. Their choice is governed by the concentration of phage genomes within the cell, thus is influenced by the multiplicity of infection and the physiological state of the host (read that as "cell size"). They then show that a unaminous vote is required by all phages in the cell in order to enter the lysogeny pathway.

Elio was spot on when he said we had arrived in a new Age of Imaging.