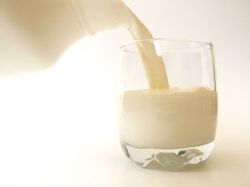 Milk is a colloid. Source

Colloid may not be a common term in biology these days, but in the early 20th century, colloids were believed to hold the key to the secrets of life. So what is a colloid? According to the Encyclopaedia Britannica it is any substance consisting of particles substantially larger than atoms or ordinary molecules but too small to be visible to the unaided eye; more broadly, any substance, including thin films and fibers, having at least one dimension in this general size range, which encompasses about 10−7 to 10−3 cm. Thus, these are nanoparticles ranging from 1 nm to 10 µm. This upper size limit is relatively high, as other definitions set it at 1 µm or as too small to be studied with a light microscope.

This definition is very inclusive, encompassing not only true globular nanoparticles but also fibers and membranes that may be mere nanometers long in one or two spatial dimensions but much bigger in the others. Many colloids by this definition are not considered to be such by those who study them. One example is a bacterial culture that consists of particles (cells) 1 µm in size, but which is rarely called a colloid (except maybe in studies of the physical properties of the culture as a complex fluid). And there are some ambiguities. For example, whereas a colloid by that definition is a substance that consists of small particles, in physics the small particles themselves are often called colloids. Also, 'colloid' often implies that the small particles are dispersed in a fluid, although that is not required by this definition. Lastly, 'colloid' is often used to describe a state of matter that consists of small particles, thus emphasizing that in principle anything can be made colloidal by splitting it into appropriately sized particles and suspending them in a solvent. Reflecting these ambiguities, many people are more comfortable using the adjective 'colloidal' instead of the noun 'colloid,' as in colloidal system, colloidal state, colloidal domain, colloidal suspension, etc. 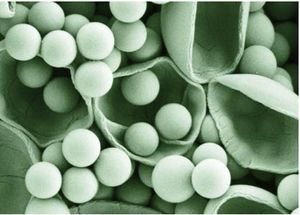 This electron microscopy image of micron-size capsules made from polyelectrolyte multilayers was the winner of the Bilder der Forschung award for science photography in 2005. Credit: Max Planck Institute of Colloids and Interfaces/Karen Köhler.

Subtleties aside, the colloidal world of nanometer-to-micron size objects is often called a 'twilight zone or 'transition regime' to emphasize its position in between the world of atoms and our macroscopic world. Wolfgang Ostwald, one of the pioneers of colloid chemistry, famously called it the "world of neglected dimensions." Colloidal structures tend to be too big for the methods of atomic and molecular physics such as X-ray crystallography, too small to be resolved in the light microscope (although confocal developments in high resolution microscopy are extending our vision toward the colloids). These vivid descriptions also suggest the strangeness and complexity of the colloidal realm. (Originally, the “twilight zone” was even believed to be governed by different and as yet unknown laws of physics and chemistry). In this view (to be taken with a micron-sized grain of salt), both macroscopic objects and atoms are relatively simple objects, or at least appear so because they are accessible using established experimental method. Colloidal systems, on the other hand, are astonishingly complex, their component objects themselves being large enough to have internal structures and complicated specific interactions.

Molecular and cellular biology is full of examples of colloidal systems: macromolecules such as proteins, RNA, and DNA; supramolecular assemblies such as membranes and cytoskeletal structures; bigger object such as organelles and small cells. Biology also reveals an additional facet of the "twilight zone." Taking a bottom-up approach to biology, we ascend from atoms to small molecules to macromolecules to complex molecular assemblies that self-assemble (and that we usually don't consider as alive). Moving instead from the top down, we find tissues, cells, organelles — all objects we would consider as living and that come into existence through growth and division of their parents. In other words, a trip through the biological colloidal domain also moves from non-living to living systems, from objects that can be formed in a test tube to those that require a pre-existing cell.

The colloidal nature of the interior of living cells, recognized already by the 19th century, motivated the study of colloidal systems. The knowledge that protoplasm — the substance that constituted cells — was a colloidal system brought forth a new form of vitalism that attributed the vital forces of protoplasm to its colloidal state rather than to its material composition. In contrast to the traditional chemical vitalism that attributed vital forces to organic substances, this view was not directly challenged by the successful synthesis of such substances from inorganic materials. In time, the colloidal nature of the protoplasm also meant that it could be studied using methods of colloid science such as ultramicroscopy and ultracentrifugation (both recognized by Nobel prizes, in 1925 and 1926). Ironically, the results of these studies, particularly those on proteins, deprived colloids not only of the vital force, but also of their special laws of physics and chemistry. Organic colloids turned out to be highly organized, not amorphous substances with mysterious properties. Their particles were found to be macromolecules with covalently linked atoms and well-defined molecular weights that participated in normal chemical reactions and assembled into complex structures such as fibers, membranes, and organelles.

In the following decades, colloids were displaced from the center stage of science (more here) by biological molecules. Then, at the end of the 20th century, research on colloidal systems re-emerged as an active interdisciplinary field at the intersection of physics, chemistry, material science, and life sciences. (For examples from my home institute, see here.) One role of biology in this field is to provide inspiration for the design of synthetic (biomimetic) systems. But in addition, as cells still contain colloidal systems, concepts of colloid science remain relevant to biology. Examples include the importance of surfaces and interfaces (think of the cell’s membranes), interactions based on entropic forces (which have been proposed to drive bacterial DNA segregation), and the ubiquitous presence of Brownian motion and molecular fluctuations (which provide the functional basis of molecular machines and define the physical limits to the accuracy of signaling). And above all, the two organizational principles of the colloidal world — self-assembly and self-organization — underlie the formation of many cellular structures. As molecular biology moves beyond molecules to modules and systems, such concepts may provide an intermediate level of description, bridging the gap between the reductionist study of individual molecules and the holistic approach of systems biology. 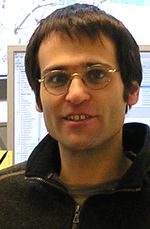 Stefan is a group leader at the Max Planck Institute of Colloids and Interfaces, Potsdam, Germany.