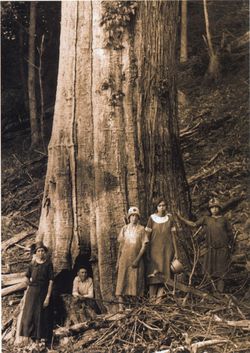 The "Redwood of the East." Source

When you read the title — The Great Epidemic — what came to mind? The Black Death (Yersinia pestis) that in two years killed 20 million people in Europe — approximately 30-60% of the population? The 1918 flu pandemic with its tally of 50 million dead in three years? AIDS, with a death toll projected to reach 200 million by 2025? Or perhaps that 20th century epidemic that struck down over three and a half billion in North America in the space of a few decades — the American chestnut blight? These chestnut trees, Castanea dentata to be precise, were stately giants often 100 feet or more in height with crowns that spanned 100 feet. Their straight trunks provided billions of dollars worth of beautiful, rot-resistant wood, and the bountiful nuts provided far more than the traditional stuffing for Thanksgiving turkeys. Combined they had made up a quarter of the forest canopy from Maine to Mississippi.

The theme that led to this ecosystem disaster is now a familiar one. Nursery stock of the Japanese chestnut (C. crenata) was first imported into the US in 1876. By 1900, many mail-order nurseries were selling trees throughout the US. Both this species and the Chinese chestnut (C. mollissima) are small orchard trees that sometimes harbor a filamentous ascomycete fungus, Cryphonectria parasitica, the pathogen responsible for chestnut blight. Both of the Asian species are highly resistant to the fungus unless stressed. Nevertheless they can serve as a source of fungal spores that can be carried to the susceptible American chestnut trees by wind or small animals. Given a wound or crack in the bark, the fungus enters its American host and proceeds to destroy the underlying cambium, eventually girdling the trunk and killing the tree above that point. Asexual spores are produced in the virulent cankers that form on the surface, and the blight spreads. 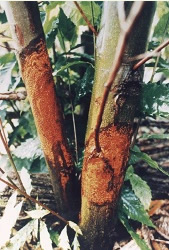 The sunken orange cankers formed on the American chestnut by the ascomycete fungus, C. parasitica. Source

The European chestnut (C. sativa) is also somewhat susceptible to the blight, but in the 1960s some trees were found that developed only superficial cankers, the cankers later succumbing to host defenses. This aroused much hope. It was quickly determined that this hypovirulence phenotype was a property of the fungus. Furthermore, application of a hypovirulent strain to a virulent canker could convert the recipient strain to the hypovirulence phenotype, and the canker then healed. A possible biological control mechanism?

More information was needed. The factor responsible for hypovirulence was found to be a dsRNA plasmid that resided, along with its RNA-dependent RNA polymerase (RdRP), within vesicles formed from the Golgi apparatus of their fungal host — a location that presumably provides the naked dsRNA some protection from fungal defenses. The plasmids could betransmitted from one fungus to another of a compatible strain during hyphal anastomosis. Among the strains found in Europe are many that show various degrees of hypovirulence. 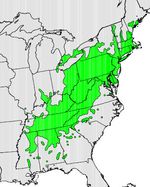 The 13 kb plasmid associated with the hypovirulent type strain (EP713) has been sequenced. It encodes two ORFs, aptly named ORF A and ORF B. Each ORF encodes a polyprotein containing a papain-like protease that self-cleaves to yield two polypeptides: the protease itself and another protein. The "other" protein encoded by ORF B provides both the RdRP and the helicase needed for self-replication, while that from ORF A shifts the fungal phenotype toward less pigmentation, reduced asexual spore production, and reduced virulence. In toto, the hypovirulence plasmid alters the levels of many fungal proteins, increasing some and decreasing others. Among those decreased are a guanine nucleotide-binding protein (a member of a large family of regulatory proteins called G-proteins that play a role in responding to environmental signals) and laccase, (an enzyme involved in lignin metabolism). (Click here for an excellent 2001 review of the entire story by Dawe and Nuss.)

All it takes to induce hypovirulence: the 12,712 base pair dsRNA genome of the European hypovirulence plasmid EP713. Both ORF A and ORF B encode multifunctional papain-like proteases (p29 and p48) that are involved in polyprotein processing. The junction between ORFs A and B consists of the sequence 5′-UAAUG-3 where the UAA serves as the stop codon of ORF A and the AUG is the start codon of ORF B. Source

Earlier I referred to these dsRNA elements as RNA plasmids. After all, they make no capsids, are non-infectious, replicate in the cytoplasm without a DNA intermediate, and never exit the cell. In other words, they behave like respectable plasmids. However, the International Committee on the Taxonomy of Viruses (ICTV) regards them as viruses. It created a whole new viral family (the Hypoviridae) with but a single genus (Hypovirus) just for them. The hypovirulence plasmid thus became the Cryphonectria parasitica hypovirus, or CHV. I still call them plasmids, echoing Brown and Finnegan who wrote: It seemed to us that unencapsidated, noninfectious RNA genomes can hardly be viewed as anything other than plasmids. 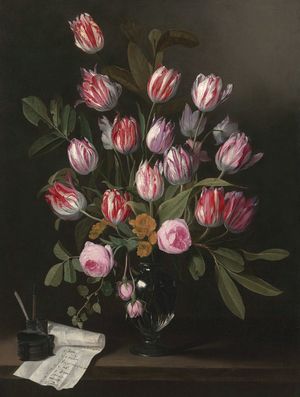 A viral bouqet hosting the most famous potyvirus, the tulip breaking virus. Source

However, my point here is not to draw a hard (and indefensible) line between viruses and plasmids, but to emphasize that our terminology is no match for reality, for the subtle gradations that exist on the biological continuum. When we add the evolutionary dimension, distinctions between viruses and plasmids can blur even more. In this case, there is evidence that these plasmids are evolutionarily related to the potyviruses (Family: potyviridae; genus: Potyvirus; named for the type species, potato virus Y). The potyviruses are so far the largest group of plant viruses, accounting for about 30% of all known types. They live a typical ssRNA virus life. Most employ insects to carry their filamentous virions from host to host, but some use fungi instead. Despite this, they do resemble the chestnut blight hypovirulence plasmids in several ways. For one, both plasmid and virus have 9-12 kb RNA genomes with a 3' poly-A tail and a 5' terminal linked protein (VPg). Both encode their proteins as polyproteins that are then self-cleaved by proteases. More convincingly, both the protease and the RdRP of the hypovirulence plasmid show significant sequence similarity to the corresponding potyvirus proteins.

What does the future hold for the American chestnut? Several strategies are being pursued in hopes of countering the blight. One is to employ the hypovirulence plasmid as a biological control agent. Hypovirulent strains had spread naturally throughout many parts of Europe in the wake of the blight itself, reducing mortality but not eliminating the virulent strains. Since the 1970s this process has been helped along in European chestnut orchards by inoculating virulent cankers with a hypovirulent strain. This proved to be quite successful in spreading the hypovirulent strains and reducing the severity of the blight in Europe, but similar efforts in America failed. Why? The answer is not known, but one can make various conjectures here. It could be that the European hypovirulence plasmid can't compete with other genomic elements already present in the American chestnut or its spread by anastomosis is hampered by vegetative incompatibilities between fungal strains that prevent hyphal fusion. Also, since the hypovirulent fungal strains produce fewer spores, they may lose out in the competition for new hosts. 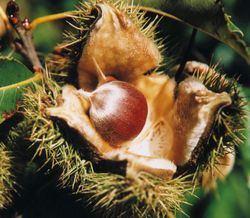 Another tactic is to use classical plant breeding techniques to introduce blight resistance into the American chestnut. The American Chestnut Foundation (TACF), in cooperation with the National Forest Service,  has done exactly that. By crossing American and Chinese chestnuts, then back-crossing repeatedly, they have produced seedlings that are 15/16 stately American chestnut and that also carry blight resistance from the Chinese lineage. The first field plantings of this final generation were made in early 2009, additional plantings in 2010. So far, so good. If this projects stays on course, in a few years thousands of seedlings will be available to the public and an extensive reforestation project will be underway. Now, if we can just keep the overly abundant deer population away from one of their favorite forage plants…