« Fine Reading: Cell Biology of Bacteria | Main | About the Events in Japan » 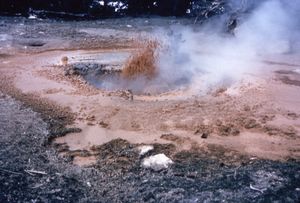 In order to release their newly assembled virions, most viruses lyse the cells that have fed and housed them. This lysis is not a haphazard affair. Some phages, for example, employ a holin-endolysin system to rupture their host's cell membrane and digest the cell wall at a precisely controlled time. (For our earlier posts about this, click here and here.) Others instead interfere with cell wall synthesis — the same strategy that we use with our β-lactam antibiotics. Now yet another completely different scheme has been discovered in a virus that infects an acidophilic hyperthermophilic Crenarchaeon. 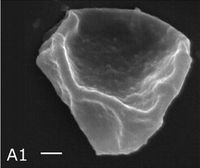 We have come to expect novelty in the bizarre zoo of crenarchaeal viruses; witness the Acidianus two-tailed virus that "grows" its two long tails after leaving the host cell. Still we weren't prepared to find a novel lysis strategy among them. The ones that infect the extremophilic Crenarchaeota weren't even thought to be lytic. Instead, it appeared that they resided long-term within their host in a carrier state, continuously secreting virions from the host cell without killing it (but also without integrating their genome into the host chromosome as do the temperate phages such as λ). This benign strategy was, we thought, how the wily virus protected itself from rapid degradation by extreme environments. Not necessarily so.

In 2009, Ariane Bize, working in David Prangishvili's lab, was investigating the life cycle of viruses infecting Sulfolobus islandicus, a crenarchaeon isolated from volcanic springs (more accurately, solfataric fields). Culturable S. islandicus has become a model hyperthermophile, able to grow in a rich medium at 78 °C and pH 3.0, with a generation time of about 13 h. Furthermore, it is host to viruses from several diverse families, including the Rudivirus SIRV2 (Sulfolobus islandicus rod-shaped virus 2). Bize found that SIRV2 defied our expectations by being a lytic virus. Not only can its free virions survive in such volcanic environments, but they are almost as stable at 80 °C as are those of mesophilic phages at 37 °C.

Figure 2. A rod-shaped, non-enveloped Rudivirus virion. The SIRV2 virion is 23 nm wide and 900 nm long — not counting the three 28 nm-long tail fibers at each end. Packaged inside is the 35.5 kb linear dsDNA genome. Source

What's novel here is that if you look at a host cell 10 h post-infection, you'll see multiple pyramid-shaped protrusions on its surface (Figure 3). The researchers dubbed these structures VAPs (virus-associated pyramids), an innocuous name that specifies neither their origin or their function. What might be their role here? Think of each of them as a hollow 7-sided cone that protrudes from the cell and penetrates both the cell membrane and the S-layer. The interior of the VAP is continuous with the cytoplasm (see B2 in Figure 3). When first formed they are small, each side of the polygonal base being on the order of 15 nm. As the infection proceeds, the VAPs grow and this dimension increases to as much as 180 nm. At the time of lysis, the larger VAPs open up at the tip, each face of the pyramid opening outward. This perforates the cell envelope and releases the mature virions. What remains is an empty ghost of a cell whose cell membrane and S-layer appear intact except for numerous discrete perforations where the VAPs had formed. 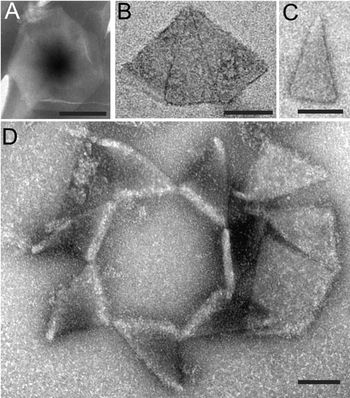 This, of course, raises lots of questions. Some answers about both the origin and function of these structures can be found in a recent paper by Tessa Quax, also from the Prangishvili lab. Conveniently, VAPs can be isolated for study as discrete structures, free of the cell membrane or other cellular constituents. How? Make antibodies against the protein found in the VAPs; fuse the antibodies to magnetic beads; mix the antibody-coated beads with crude extracts of cells collected 10 h post infection. The VAPs obtained this way are mostly intact polyhedra composed of seven triangular faces. Seven? Although not unheard of, such sevenfold symmetry is extremely rare in Nature.

Working with these isolated VAPs the researchers uncovered even more amazing aspects of the story. Using SDS/PAGE they found that these novel structures are composed of only one protein, subsequently identified as the ~10 kDa phage protein, P98. Conversely, using immunoelectron microscopy they localized the P98 protein specifically in the VAPs, and found it uniformly distributed over their entire structure (Figure 5). 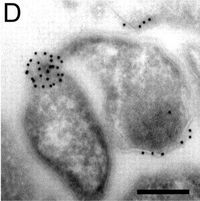 And, the gene encoding P98 is not only necessary to assemble VAPs, it is also sufficient! This was demonstrated elegantly first by expressing the gene in another Sulfolobus species, S. acidocaldarius — a species that is resistant to SIRV2 infection and does not carry homologs of any SIRV2 proteins. EM observations of these P98-expressing cells showed normal-appearing VAPs on the cell membranes. Even more surprising, E. coli cells expressing P98 construct VAPs on their cell membrane, the VAPs penetrating into the periplasm. Although these VAPs self-assembled in vivo in both cases, they were never seen to open and perforate the cell. Apparently other factors made during SIRV2 infection are required to trigger opening of the VAPs, including the factor(s) that determine the time of cell lysis. 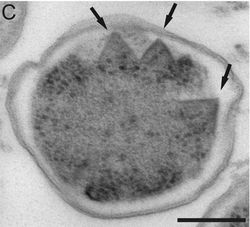 This is as far as the story goes for now. Clearly, there is more to come, as questions abound. How does SIRV2 control when lysis will occur? Do all the VAPs open simultaneously? How do the VAPs self-assemble and grow in vivo? Their relationship with the cell membrane is especially intriguing given that the same protein is able to assemble into pyramids within both bacterial and archaeal membranes. And what about the rest of the hyperthermophilic archaeal viruses? This lysis mechanism is not universal among them. Its spotty distribution suggests movement by HGT, leaving us wondering where else it might turn up.

The VAPs carry another message for us. Currently, when one sequences the genome of an archaeal virus, more than 90% of the predicted genes will be unknowns, i.e., sequences with no detectable similarity to any known gene. Even for the better-studied phage, 80% of the genes are unknowns. This raises a big question. Are all these unknowns truly novel, carrying out functions not observed previously? Or are they simply highly divergent members of well-studied gene families? Some think that the latter is the case, citing the long evolutionary history of viruses and their higher mutation rates. However, the VAPs are proof that at least some novel functions are still lurking out there, waiting to be discovered. And the crenarchaeal viruses are a good place to look. So grab your sampling equipment and head for your nearest hot spring, fumarole, or mud pot. You will be rewarded by encounters of a strange kind.

I am a first year graduate student given the task to propose an original hypothetical research project. I have chosen to study the mechanism of VAP opening during the STIV infection process. I understand that if you knock out p92 both pyramid formation and viral assembly are prevented. My question is: If you knock out a single gene that disrupts viral assembly, say the MCP, do the p92 VAPs still open? Also, the 2010 Cell Press article by Johnson, J. and Fu, C. showed the presence of "intrapyramidal bodies (IPBs)", but I can not find much more on what these IPBs and they do not seem to be present in the other studies I have reviewed. Any thoughts on this observation? Thanks.

I envy you, Charli! Such fascinating phenomena to explore, and you are poised to do just that. I can't really answer your questions as my knowledge of VAPs is strictly 2nd hand from reading some papers and writing up a blog post. You are already a bit ahead of me. I can, and will, offer a couple of comments.

As to the IPBs, I know only of that same paper. The authors would seem to be your best option for more info on that.

Thanks for the inquiry and I hope your hypothetical research project yields some interesting hypotheses.