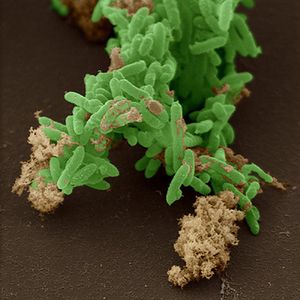 If the power of Superman resided solely in his supernatural abilities, then Bruce Wayne’s Batman would never have been able to compete on his level. But when the other factors that superheroes depend upon are accounted for — sidekicks, spandex, sarcasm — both Superman and Batman can claim success in the world of do-goodery and hunky haircuts. In other words, the strength and effectiveness of an individual’s power often depends entirely on the creative use of raw materials.

This reality is mirrored in the microbial realm: organisms compete to occupy and dominate specific niches through adaptation and natural selection, and it’s the ones that play by an entirely different set of rules that may have the possibility to change the world.

Notably, species that have evolved innovative and, subjectively, weird methods of living have long intrigued scientists with their survival abilities and preferences. Consider the fascination with the extremophiles in the hot springs at Yellowstone National Park that led to the isolation of Taq DNA polymerase from Thermus aquaticus, surely one of the most important enzymes in the molecular biology lab. And while many microbes follow the well-studied route of using oxygen as a final electron receptor, researchers are increasingly looking at Geobacter species that use iron oxides as the final electron receptor in order to uncover the secrets enigmas of environmental restoration, energy harvesting, and the creation of the world.

History of the World, Part I: Why iron may be the new oxygen

In addition to being the scene of notable Civil War skirmishes, the Potomac River near Washington, D.C., has the distinction of being the source of the first isolated specimen of a Geobacter species, known initially as GS-15 and subsequently as Geobacter metallireducens.

Until Derek Lovley and his lab at the University of Massachusetts Amherst first identified Geobacter in 1987, no organism had been shown to use iron oxides as the final electron receptor. For most organisms, a functioning electron transport chain and the production of cellular energy can be the difference between life and death, and billions of years have been dedicated to honing this delicate machinery; those without these crucial mechanisms are relegated to the obligate intracellular, Artful Dodger way of life. Like the many, Geobacter species are dependent on the electron transport chain for energy production but instead of using oxygen as the final electron receptor, they use an oxidized iron species.

Lovley and his team observed that iron species metabolized by G. metallireducens are magnetic, whereas iron in the naturally-occurring anaerobic environment is not. As the name suggests, this organism reduces ferric iron (Fe[III]) to magnetite (Fe3O4) through the oxidation of organic compounds (such as radioactive metals  in organic compounds and oil-based pollutants) into carbon dioxide.  This observation sheds light on how large magnetite deposits may have formed in ancient iron accumulations in the early years of the anoxic world. 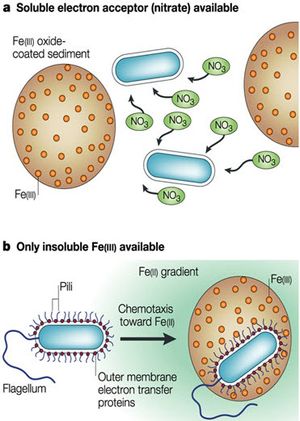 When no soluble electron acceptor is available but insoluble Fe(III) is present, chemotaxis mechanisms — including the development of pili and flagellum — are activated. Source

On the contemporary scene, this curious adaptation permits Geobacter species to survive on energy sources entirely unavailable to most aerobic organisms. And while it does this, it may perform tasks exceedingly useful to humans. For example, Lovley and his team have shown that anaerobic respiration of G. metallireducens in anoxic environments may be harnessed for pollutant removal and thus bioremediation.

Analysis of several sequenced Geobacter genomes revealed that in the absence of a soluble electron acceptor, genes necessary for motility are activated. Notably, pili and flagella help Geobacter chemotaxtoward insoluble Fe(III) molecules. Wouldn’t it be nice if this mechanism could be harnessed by researchers interested in using organisms for search-and-destroy bioremediation?

Since 1987, research has continued to expose the potential power of Geobacter as a member of the microbial tool kit; as recently as December 2010, Lovley and colleagues reported that organisms from different Geobacter species can form a direct electric connection to pass an electric current between them. The ability to undergo interspecies electron transfer allows the microbes to harness food sources that neither can access alone. This also opens the possibility of using Geobacters and related organisms to create self-sustaining battery cells and other renewable sources of energy.

In this age where grapevines Tweet instead of whisper, power is associated not necessarily with what is known, but with who knows it — and Geobacter is known more than most microbes. According to Google Trends, “microbial fuel cells,” for which Geobacter is a key player, first started making headlines in 2007 via one of the surest methods of popularizing biology: a link to beer. In 2009, Time ranked Lovley’s eight-times better Geobacter cells as #20 out of the 50 Best Inventions of 2009. 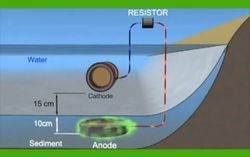 In this still from the Office of Naval Research video, a basic schematic to harvest energy from Geobacterspecies present in aquatic soil is outlined. Source: ONR YouTube channel.

Then in late April 2010 came a moment of fandom in popular media, as evidenced by a peak in its search terms on Google — timing that coincided with Lovley’s  award of a $1 million United States Department of Energy grant and, of course, the Deepwater Horizon oil spill. In the wake of the spill, many news sources, including The New York Times and NPR's Science Friday, produced stories on Geobacter that highlighted the ability of the microbe to rid the world of pollutants while simultaneously producing usable energy. The U.S. Office of Naval Research jumped on the bandwagon by posting a video in their YouTube channel seven days after the rig exploded highlighting several governmental projects, including the creation of immortal batteries and turtle conservation research.

The diversity of applications for Geobacter species provided endless fodder for popular media. All shilling aside, these small but significant invasions of hard science into the media spotlight could stimulate the research support needed to further our understanding and use of Geobacter species, to the benefit of us all.

Plus, until the Batmobile is superseded as the most desirable car of all time, we might as well encourage the Bruce Wayne of microbes to do what it does best. Given the amount of energy Lovley and associates have managed to produce from selected Geobacter microbes, its powers may someday be harnessed under the hood on the road to a cleaner, brighter future.

For more in the wild, weird world of Geobacter, visit the Geobacter Project, listen to the Pulse of the Planet Geobacter podcasts, or check out Lovley’s most recent publication on the future of electric microbes.

Suzanne Winter graduated from Swarthmore College in 2010 with degrees in biology and comparative literature. She has written for the news section of BioTechniques and is currently working as a freelance biology and life sciences writer while applying to medical school and public health masters degree programs.