Gut Microbes and the Infant Brain: A Surprising Symbiosis

The ancient genes versus environment argument (i.e., nature versus nurture) about the development of the infant human brain has taken a swerve in a direction few thought possible. A recent paper by investigators from Sweden and Singapore reports on studies using a mouse model to demonstrate that the presence of the gut microbiota significantly influences the developing brain, influencing developmental pathways that affect both motor control and anxiety-related behaviors. The implications for human development are certainly not yet realized, but could be profound. Our anxiety, motor control, and even cognitive pathways are implicated in this paper. Microbes may indeed be subtly changing our brain early on — and for what purposes we cannot yet say. The article would imply that this interaction is beneficial to us, and thus indirectly to our microbiota, but the mere fact that microorganisms can shape our minds brings up many more questions about how humans develop their identity.

Figure 1. Germ Free (GF) mice show elevated (A) norepinephrine (nor adrenaline, NA), (B) dopamine (DOPA), and (C) serotonin (5-HT) turnover in the striatum. The histograms depict the mean ratios in the striatum of male GF and SPF mice. Source

The explosion of information about the microbiota of the human intestinal tract is leading to further exploration of the nature of these microbes, why they choose to live inside us, and how we benefit from their residence. It is commonly accepted that in utero humans are germ free, and that they are colonized by microbes as they pass through the vaginal tract and during their first days in the outside world. This colonization appears to be essential for the development of a healthy gastrointestinal tract and immune system. Perhaps less well characterized is the interaction between the central nervous system (CNS) and gut microbiota. Looking in the literature we see a multitude of already characterized interactions. Our CNS impacts the microbiota by changing pH and intestinal motility, so that only certain microbes can survive. The CNS also regulates our immune response to cater towards colonization by certain beneficial microbes. More surprisingly is that, in return, the microbiota can influence the CNS. Microbiota activate visceral nerves in the gut that send signals to the CNS, signals that in turn can cause direct changes in the neural wiring of the CNS (Reference). In addition, gut bacteria secrete neurotoxins or small peptides that affect local or systemic signaling pathways that also change CNS wiring (Reference). Hormones released by gut bacteria, such as norepinephrine and epinephrine, also have systemic effects on neuronal development. This field, which has been called Microbial Endocrinology, has been previously mentioned in this blog. 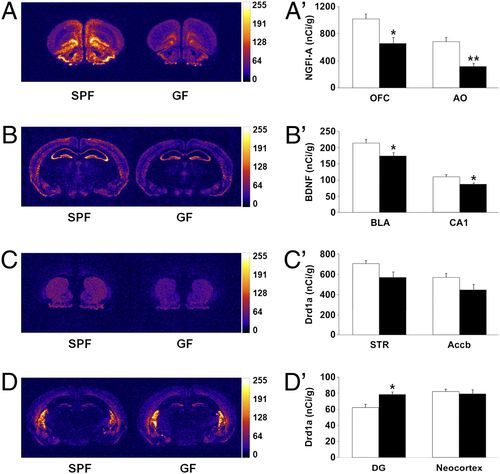 The authors of the recent paper studied germ-free mice and, as controls, Specific Pathogen Free (SPF) mice, which have a normal gut flora but are free of known mouse pathogens. The mice missing the normal gut microbes had different levels of neurotransmitters in their developing brains. Specifically, germ-free mice had higher levels of norepinephrine (noradrenaline, NA), dopamine (DOPA), and serotonin (5-HT) than the SPF mice (Figure 1).

Also, there were significant changes in synaptic plasticity, that is, in how neurons get wired to other neurons. Figures 2 and 3 show the up-regulation of a number of genes associated with synaptic plasticity and with canonical signaling pathways.

These biochemical changes were shown to have behavioral repercussions. The authors reported on two traits in their mouse model, anxiousness and motor control. In both cases, germ-free mice showed a significantly higher level of activity than the controls. The authors state: “…… we propose that altered expression profiles of canonical signaling pathways, neurotransmitter turnover, and synaptic-related proteins may combine and contribute to behavioral differences observed… While these results are certainly preliminary, the dramatic effect of such observed changes in neurotransmitter levels leads us to believe that gut microbiota have a powerful effect on CNS physiology. Figure 3. Expression profiling of GF mice and SPF mice brains. A heatmap of genes showing statistically significant (q< 5%) and fold change (>2) differences, between SPF and GF mice in the hippocampus (A), frontal cortex (B), and striatum (C). Each row represents the relative levels of expression of a single gene across all mice; each column represents the levels of expression for a single mouse. The colors red and green denote high and low expression, respectively. Source.

It seems likely these effects may extend to higher cognitive neuronal networks as well. In people, a drop in serotonin levels, for instance, may lead to depression as well as anxiousness. We can boldly think about the implications of these results for human development. A child developing in a low germ environment, regardless of its genetic make-up or parental involvement, will have a different brain than one developing in an environment full of microbes. The mental state of patients currently taking antibiotics for a gastrointestinal disease may also be affected by the elimination of certain species of normal microbiota. Who knows, the rise of autism and pediatric anxiety disorders in the developed world may be causatively linked to the increased sterility of our environment, rather than to parenting styles or as yet unknown neurotoxins.

The fact that microbes in our gut can have any effect on our brains surely gets our attention. That they may fundamentally change our brains as we develop is breathtaking indeed. Our symbiotic friends may be more connected to us than we know, and only a complete appreciation of their power will allow us to treat that relationship with the caution and respect it deserves.

Micah is in the MD/PhD program at the University of California, San Diego and a student in the Integrative Microbiology graduate course.

to respond to the reviewer that said " I am disappointed that they didn't show it was specifically bacteria in the gut that produced these effects, they simply assumed it." i looked up the paper and found that they did actually test this by taking germ-free mice and lettting them 'conventionalize' and they found them to be identical to the SPF mice. Here's their excerpt,"To test whether conventionalization in early life of GF mice could “normalize” the increased motor activity and alter the anxiety behavior, we conventionalized a new set of GF mice with microbiota obtained from SPF mice 30 d before mating and allowed the progeny to mature in an isolator with bacteria. Adult conventionalized offspring (CON) were behaviorally tested as described above. The rearing activity of the CON mice was significantly different from that of GF mice (P < 0.05) and did not differ from that of SPF mice (Fig. 1E). "