« Gut Microbes and the Infant Brain: A Surprising Symbiosis | Main | Targeting an Achilles' Heel of Plasmodium » 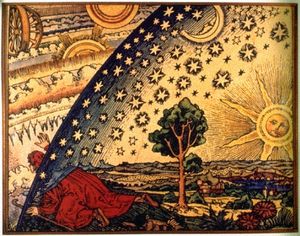 We recently asked this Talmudic Question as our TQ #71:

As NASA’s hotshot exobiologist, you are asked to design an Earth satellite system in which some organism(s) can live actively (i.e.. no spores) for millennia. How would you go about it? Specify an orbit of your choice.

I would take a clean coca cola bottle, fill it half with soil and half with sea water, and make sure it stays liquid for the next 1000 years. "Everything is everywhere and the environment selects" (Martinus Beijerinck) + "life is what happens to you while you're busy making other plans" (John Lennon). If it is well closed and nothing escape from the bottle than there should be enough of everything needed to sustain life for much longer than a millennia.

To which I (Elio) replied: The simplicity of your proposal wins out over all the complex schemes that I had dreamt up. Good for you!

It turns out that I jumped the gun. It's not so simple, as fellow blogger Russell Neches insightfully pointed out.

Feeling a bit giddy with sleep deprivation (and the first successful run on our lab's new sequencing machine), I decided to take a crack at Talmudic Question #71:

As NASA's hotshot exobiologist, you are asked to design an Earth satellite system in which some organism(s) can live actively (i.e., no spores) for millennia. How would you go about it? Specify an orbit of your choice.

Ami Bachar gamely suggested entrusting a cargo of seawater and dirt to a Coca Cola bottle, and lobbing it into orbit. I liked this idea so much that I couldn't resist embroidering it.

This is a fascinating idea. Could you create the happy conditions we enjoy here on the surface of this planet, but without the planet? Could you do it without cheating with moving parts, power sources, or other un-planet-like features? Fortunately, the audience we're trying to please are microbes, who aren't as finicky as astronauts.

The first problem is that Coke has never, to my knowledge, designed bottles that will stop hard UV radiation, X-rays, or relativistic protons. Such a bottle would never make it past the product safety laws, even those from Coke's early days. The glass would need to be doped with a double-handful of lead to stop at least some of the UV and X-rays, and perhaps some low-Z metal like beryllium (which is possibly more toxic than lead) to slow solar particles before they reach our precious mud. Otherwise, during a solar storm, the bottle could be sterilized by Bremsstrahlung radiation. Even thus enhanced beyond beverage container specifications, the glass probably wouldn't do nearly as good a job as the ozone layer and the Earth's magnetic field. Good thing microbes are tough.

The next problem to worry about is temperature. An object in a shady spot on the moon will cool to -153 °C, and in a sunny spot will heat to 107 °C. The Earth's average temperature is about 13 °C. How hot would it get inside the bottle? The key to the puzzle is the Stefan-Boltzmann Law:

where the constant σ is called, naturally, the Stefan-Boltzmann constant, T is the temperature of the sun's photosphere (about 6000 Kelvin), and I is the power emitted per square meter. Using the Stefan-Boltzmann law, we can calculate that the sun's surface emits 7.3×107 watts per square meter. Multiplied by the total surface area of the sun, that's 3.9×1026 watts. This energy spreads out more-or-less uniformly through space in all directions. When you spread it over a 96-million-mile radius sphere, you get 1367 watts per square meter. This number is Earth's solar constant (S0).

The Earth absorbs a disk of this sunlight (πr2), but the energy is spread over the surface of a sphere (4πr2), so the average amount of energy falling on a square meter of the Earth is one quarter of the solar constant, or 342 watts per square meter. A Coke bottle isn't a sphere, but it's also not made out of thick lead/beryllium glass either. This is a very special Coke bottle.

About 30% of the light that reaches the surface is reflected back into space (this is called albedo, which astronomers spend a fair amount of time worrying about). The albedo reduces the energy available for heating to 240 watts per square meter. Using the Stefan-Boltzman Law, this gives us a temperature of 255K, or -18 °C. This is the Earth's average equilibrium radiating temperature, which it fortunately never reaches, thanks to our wonderful atmosphere. Don't let anyone tell you that the greenhouse effect is a bad thing! All things in moderation, of course.

In the Earth's atmosphere, water vapor, carbon dioxide and methane are opaque to infrared, but transparent to visible light. A great deal of sunlight comes down as visible light, heats up the ground, and gets re-radiated by infrared. Because of these greenhouse gasses, some of this infrared heats up the atmosphere, which then re-radiates both into space and back at the ground. (Actual garden greenhouses do not work this way at all; they simply block heat losses from convection by trapping the air inside.)

Going back to the Coke bottle, we can choose a temperature between -18 °C and 58 °C by setting the strength of the greenhouse effect. We'll be careful to choose mud of the right color to approximate the Earth's albedo. To do the job of Earth's greenhouse gasses, we can use an optical infrared filter, like the ones used in digital cameras. The bottle would need to be triple walled to minimize heat loss from conduction, with the middle wall acting as the filter.

One of the features of our planet that has allowed life to keep its foothold here despite an unstable climate is that our planet has a nice variety of temperature zones. When the planet warms, the temperate zones march toward the poles, and when the planet cools, they march toward the equator. The Earth owes this feature to its size and its curvature. Even if the bottle were a sphere rotating about an axis, like a miniature model of the Earth, the heat conduction in the mud would keep it at basically the same temperature throughout, despite getting more radiation at its "equator."

To set up a temperature gradient, we'll need some kind of heat flow through the mud, from a source to a sync. All we need to do is dial up the greenhouse effect, and add a sync. Letting heat "leak" out of the bottle from a specific place is easy; just add a bit of metal that sticks through the layers of the bottle, with a little heat sync dangling out into space. Without a source of heat, the heat sync would tend toward -18 °C. You could think of this as the bottle cap.

This would help encourage ecologically distinct bands, which would help preserve and generate diversity. This would be important for keeping things going as conditions changed.

After all this, the experiment probably wouldn't last a thousand years. What makes the Earth so wonderful is that it has a lot of semi-separated compartments and a lot of big gradients. Conditions change constantly and sometimes catastrophically, but there is always a comfortable place somewhere.

Obviously, the ecology of the Coke bottle world not even remotely resemble the Earth's. Carbon cycling, phosphorous cycling, and nitrogen cycling would work completely differently. The reservoirs of inorganic material would be different, and the pathways into and out of those reservoirs would be different. We would expect very different dynamics. My guess is that almost all of the available inorganic materials would eventually be incorporated into biomass, with only a very small amount made available by secretions and cells that happened to die. Perhaps this would lead to never-ending microbial gladiatorial combat, or perhaps it would be a quiet little garden wheeling through space. Perhaps you'd end up with nothing but cellular wreckage and a giant wad of phage.

Anyway, before attempting this experiment, I would strongly recommend finding a way to freeze Richard Lenski for a thousand years and thaw him out unharmed. Someone is going to get to analyze the aliquots from the Coke bottle. As nice as Richard is, I think he might run over the rest of us with cleats on to be the guy to do it.

I'd like to thank Aric Mine in Albert Colman's lab, as well as Samuel Miller and Genna Patton at the University of Chicago, for their suggestions and corrections.

Russell Neches is a member of the Microbiology Graduate Group, UC Davis.

Very well done! and thanks much for honouring my answer with a reply, it sure is a nice answer and one we can learn from. I would like to reply with only two points and in anyway say that I fully agree with the above answer.

1) I said in the original text "make sure it stays liquid for the next 1000 years" and by that I meant that it should be well protected from freezing or heating too much. Why would such a thing heat so much during the coming 1000 years I do not know. As far as I was told, space is rather cold. I might be wrong there. In anyway, keep it liquid, meaning, keep it somewhere around room temp.

2) UV is indeed a good point, although I think it will only penetrate to the upper 0.5mm — so the inner microbes should be protected. With respect to the proton flux, I do not know much. Around the earth there should be some magnetic shield for that. Not so sure about the drum system as well since potentially you can make the thing orbit the earth in a way that it experiences day-night shifts (it depends probably on how far the orbit is from earth. Adding a gradient screen is a good idea. A Winogradsky column is an upgrade of the bottle idea to augment biodiversity (although I suspect most species would be on the inner section where it is dark).

Russell Neches says "provide as many niches as possible" and I fully agree. It would definitely not hurt to have larger niches, e.g., salt water, fresh water, soil + water, soil only of different kinds, etc. Good call, although not as simple as 1 Coca Cola bottle — you must admit :). A system can be VERY complex with many many devics and gradients and niches — no doubt, but the question was to provide a system that can sustain active organisms. You can do so with 1$ Billion and you can do it with 1$. Finally, one small question — I didn't understand: Why did you say "That probably wouldn't work for a thousand years either, but it's getting closer"? what is preventing from this ecosystem with an outer energy source (light) to keep recycling itself? Thanks for a good answer.

Ami Bachar is a postdoc at the Zuckerberg Inst. for Water Research. Ben-Gurion University, Israel.