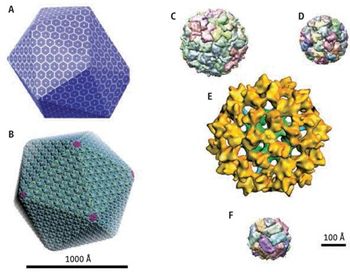 Bacterial microcompartments were a great innovation. As Alan Derman explained,  these protein-bounded structures assist with diverse metabolic processes by housing the requisite enzymes along with their substrates, sequestering potentially toxic intermediates, and allowing the products to exit. But the story does not end there. Enter the nanocompartment.

These are the simplest variation known so far on the theme of bacterial compartments. Like the micro version, these nano structures are thin, icosahedral protein shells that enclose a specific protein payload. Here the shells are only 20-24 nm in diameter, compared to the ~120 nm diameter of the microcompartments, and the shells are built from only 60 copies of a single protein, encapsulin. Turns out that the encapsulins are a large and widely-distributed family of proteins found in both the Bacteria and the Archaea. The first ones had been noticed a decade ago in culture supernatants of Mycobacterium tuberculosis and Brevibacterium linens. However, their structural role in the building of protein shells was not discovered until 2008 when Sutter and colleagues investigated the structure of the capsulin of Thermotoga maritima, a hyperthermophile from a very deep branch in the bacterial lineage. (For a helpful commentary on the Sutter paper, click here.)

Structure of the T. maritima nanocompartment composed of 12 encapsulin pentamers. (a) View from the outside on the five-fold symmetry axis. One pentamer is highlighted in cyan, with one monomer in red. (b) View to the inside of the shell, which is cut open in the middle and shown in a surface representation. Source

The encapsulins in the shell form 12 pentamers, each with a central pore a few angstroms in diameter; other pores exist between adjacent pentamers, altogether offering several possibilities for selective influx and exit. What could be the function of such tiny compartments? To get some clues, the researchers looked at the neighborhood around the encapsulin genes in 49 bacterial genomes. No viral genes were evident. Instead, almost all of the encapsulin genes are conveniently located in two-gene operons along with a gene for an enzyme involved in oxidative-stress response: either a heme-containing dye-decolorizing peroxidase or a ferritin-like protein. (Ferritin-like proteins in bacteria oxidize toxic ferrous iron to an insoluble ferric form that is deposited within the cavity formed by their multimeric structures.) Several lines of evidence indicate that those enzymes are targeted to the nanocompartments and reside there (along with iron deposits, in the case of the ferritin-like protein).

For us virophiles, a most intriguing property of the encapsulin from T. maritima is its "remarkable" similarity to some viral capsid proteins — similarity in both its tertiary structure and its protein-protein interactions. So that raises even more questions: Who originated these proteins, the viruses or the bacteria, and when? No answers yet, leaving us free to speculate and place charges of nano-theft.

You read my mind! Very "phagic." There may not be sufficient sequence similarity for you to ever get accurate alignments of encapsulins with phage capsid proteins even at the amino acid level (phages evolve too quickly!), but 3D structural similarities between the proteins are evident. A kind of "spatial alignment."