« Cyanobacteria: Growing a Green Future Around the Clock | Main | Six Questions About CRISPRs » 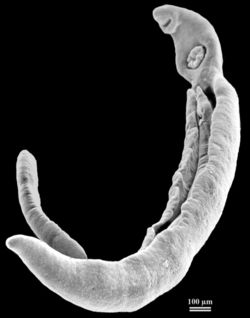 A Schistosoma mansoni pair, with the thin female located in the male's so-called gynaecophorical canal. Source

There are embraces and there are embraces. Some may last for a lifetime, as was thought to be the case with some schistosomes (though it turns out that a few pairs do get a divorce). Other contacts, as with humans, may become quite intimate and lead to the transfer of biological material. In the bacterial world, embracing has been thought to be limited to conjugation, an iffy process that can be interrupted by shaking. But herein lies the news.

Recently, a group of researchers reported that Borrelia, the agents of Lyme disease and recurrent fever, undergo a very intimate sort of embrace. They reported seeing Borrelia cells associating, sometimes for seconds or even minutes, before again dissociating. Details of the process  as observed by using cryotomographic electron microscopy revealed something novel:  the fusion of the outer membranes of these cells (being Gram negative, they have an inner and an outer membrane). Since the fused regions span several micrometers, the two partners come to share a common periplasm. The flagella, which in spirochetes are bundled and lie within the periplasmic space, here fused to make a single bundle. And in one striking example (their words), the cytoplasms of the two cells were also seen to have fused together. 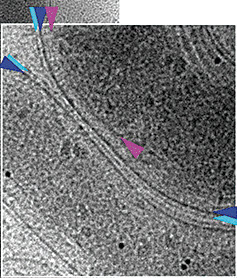 What’s this all about? Is this a form of conjugation, akin perhaps to the fusion of gametes in eukaryotes? Care is needed. As the authors point out, it remains to be seen if the fused bacteria reported here originate from two separate bacteria undergoing close apposition or from bacteria that underwent cell division but in which one of the daughter cells then changed its direction of movement to push the not-yet-separated cytoplasmic cylinders towards each other.

The authors further state: Are the observed events, which we interpret as fusion, biologically relevant? Electron microscopy has a long history of revealing important findings, but it also has a record of preparation artifacts. Nicely put. They also wonder about how fused bacteria separate again. But it is evident that these spirochetes can house two genomes within a single outer membrane. Fascinating! 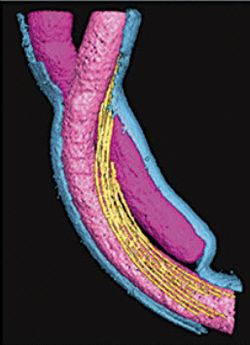 Reconstruction of a tomogram of two closely apposed B. burgdorferi. Bright and dark magenta correspond to the different cytoplasmic cylinders, blue to the outer-membrane sheath and yellow to the periplasmic flagellar filaments. Source