« Six Questions About CRISPRs | Main | Coping with Hard Times: Death as an Option » 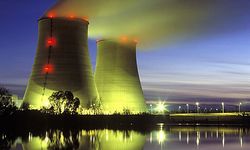 Reports in the media of the nuclear plant disasters in Japan often cite the amount of radioactivity released in units called millisieverts. Not knowing what a millisievert is, I resorted to Wikipedia for the needed clarification. We reproduce some of their explanation here as a public service.

The sievert (symbol: Sv) is the SI derived unit of dose equivalent radiation. It attempts to quantitatively evaluate the biological effects of ionizing radiation as opposed to the physical aspects, which are characterised by the absorbed dose, measured in gray. It is named after Rolf Sievert, a Swedish medical physicist renowned for work on radiation dosage measurement and research into the biological effects of radiation.

As with every SI unit whose name is derived from the proper name of a person, the first letter of its symbol is upper case (Sv). When an SI unit is spelled out in English, it should always begin with a lower case letter (sievert), except where any word would be capitalized, such as at the beginning of a sentence or in capitalized material such as a title. Note that "degree Celsius" conforms to this rule because the "d" is lowercase.