by Brandon Kim and Jon Sin 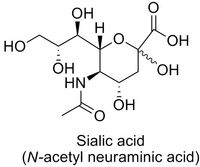 To a pathogenic microbe, the human body is a foreboding environment filled with bacteriocidal immune cells ready to seek out and destroy foreign invaders. When a leukocyte detects the presence of pathogen-associated molecular patterns (PAMPs) present on the surface of pathogenic bacteria, it releases an array of cytokines, mounting an immune response and bringing about an abrupt end to the pathogen’s colonizing campaign. However, as a testament to bacterial evolution, many species of bacteria have developed tactics to evade the host immune system. Such trickery includes hiding within the safety of host cells, releasing free antigens into the blood to inactivate antibodies, or coating themselves with a slippery sugar-based capsule that makes them inedible by macrophages.

One method employed by the meningococcus (Neisseria meningitides) and H. flu (Haemophilus influenzae) is to cover their surface antigens with sialic acid, a monosaccharide that is widely found as a terminal residue on the polysaccharides that coat the cells of our tissues. In this way, these pathogens disguise themselves as "self," thus thwarting the action of patrolling leukocytes. Truly, this would seem to be a foolproof method of immune evasion, as patrolling immune cells would be none the wiser, allowing the invading bacteria to comfortably colonize the respiratory tract free from danger. And indeed, this tactic does effectively ward off immune attacks, but it does not evade a most-conniving cohabitating organism, the pneumococcus (Streptococcus pneumoniae).

Pneumococci are opportunistic Gram-positive pathogens found in about 10% of healthy people. To cause disease, it is not sufficient for them to evade the immune system; they must also outcompete other microbes seeking to occupy the same niche. Every clinical pneumococcus isolate has a surface-expressed neuraminidase, NanA. This enzyme is thought to be used by these organisms to facilitate their adhesion to host respiratory cells by removing the sialic acid residues that shield the needed receptors on the cell surfaces. However, this enzyme plays a dual role for the pneumococcus: it can also expose competing microbes to the perils of the host immune system.

A report by Shakhnovich et al. suggests that pneumococci may use the enzymatic activity of NanA to not only cleave sialic acid residues on host cells, but also to sever those found on competing bacteria, such as meningococci and H. flu. Without their sialic acid, the LPS of these organisms is recognized by the immune system, much to their detriment. These researchers found that the incubation of these bugs with the supernatant of pneumococcus cultures increases the amount of naked LPS on their surface. They estimated that, under these conditions, the supernatant derived from one pneumococcus is sufficient to desialylate about 1,000 meningococci. With their identity thus revealed, the innate immune system has a field day, rapidly clearing-out the exposed pathogens. With the competition dispatched, pneumococcus is now free to colonize as it pleases, while at the same time dining on the free sialic acids liberated from the losers. 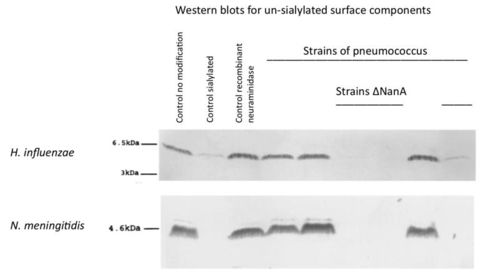 The effect of pneumococcal supernatants on sialylation of H. influenzae and N. meningitidis. LPS was visualized by immunoblotting with a monoclonal antibody specific for LPS from which sialic acid has been removed. Source

Pneumococci seem to be adept at this “oust your competitors” strategy. Their previously observed production of high concentrations of hydrogen peroxide  (for a previous post on this topic in this blog, click here) may be inhibitory or bactericidal in vivo to other species that reside in the same environment, including H. fluand pneumococci. Thus, this study describes a second mechanism whereby pneumococci could interfere with potential competitors.

No in vivo studies are presented in this paper, so it remains to be seen whether interspecies competition takes place, say, in the human upper respiratory track. But already there is evidence that pneumococci may have inhibitory effects on H. flu in people. When pneumococci were present during episodes of chronic bronchitis, H. flu was less likely to be found.  Conversely, the use of the pneumococcal conjugate vaccine was associated with a small (11%) increase in disease due to H. flu. This looks like a case where you have to be careful about what you wish for.

Brandon Kim (right) and Jon Sin (left) are enrolled in the San Diego State/University of California at San Diego Joint Doctoral Program and are currently students in the Integrative Microbiology graduate course.

from which sialic acid has been removed