Phage predation on bacteria is intense, but bacteria are not defenseless sitting ducks. They make use of a repertoire of diverse strategies to stay even with even the wiliest of phages. First line defenses are those that block phage entry at the door. Often these involve modifying a surface component that is used by the phages as a recognition, attachment, or entry site. Such changes typically carry fitness costs, by impacting essential transporters for example; as a result, phage sensitive strains often outcompete the phage-resistant mutants when there are no phages around. Also, when resistance is gained by modifying the bacterium's surface LPS or O-antigen, acquiring resistance to one phage can mean the loss of resistance to another.

CRISPRs, on the other hand, are a second line phage defense, one that swings into action after the phage has successfully attached and injected its genome into the cell. Although it may be risky letting the wolf in the door, a successful CRISPR defense offers several advantages. For one, the bacterium may get a nucleotide lunch; for another, CRISPRs can defend against plasmids, too. And as we'll see, this system allows for resistance to multiple phages without apparent fitness costs. So far CRISPRs have been found in approximately 40% of the sequenced bacterial genomes, but that number may be an underestimate as many of the sequenced strains, having been maintained in phage-free culture for a long time, may have lost their CRISPRs.

What is a CRISPR?

For the basic story about these Clustered Regularly InterSpersed Palindromic Repeats, as known three years ago, check out our earlier post and refer to the figure legend below. For excellent recent review articles, click here, here, and here.

A CRISPR locus in a bacterial chromosome. The locus includes an array of alternating spacers and palindromic direct repeats. The identical repeats range between 21 and 47 bp in different loci; the spacers are of constant length but are hypervariable in sequence, their sequences having been derived from previously encountered DNA phages or plasmids. The entire array is transcribed as a single mRNA under the direction of a promoter located in the leader sequence. Other CRISPR-associated genes (CAS genes) encode the CAS proteins that add new spacer-repeat pairs, process the CRISPR transcript, and cleave the recognized foreign DNA. Source

How do CRISPRs work?

An important clue came from observation of bacterial mutants that have acquired phage resistance. Among them were some that have added a new repeat-spacer pair at the leader end of the array. Each of these new spacer sequences matches some section of the infecting phage genome (called the protospacer). How a bacterium does this is not yet known; the researchers who figure this out will surely make a big splash.

Since those added spacers are necessary for the newly acquired phage resistance, the CRISPR system is a blatant smoking gun. But just how do CRISPRs interfere with phage infection? As noted in one of the 2010 reviews: The mechanism by which CRISPR provides resistance against foreign genetic elements is not fully characterized. Some mechanisms have been ruled out: CRISPR defense does not block phage adsorption or DNA injection, does not involve a restriction-modification system, and is not an abortive infection mechanism. Most likely, the degradation of the targeted nucleic acid by a CRISPR endonuclease is the key. 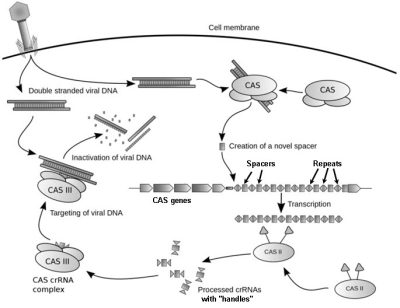 The CRISPR defense mechanism. From this source, slightly modified.

Here are some of the known details. The entire CRISPR array is transcribed constitutively as a single, long RNA that is then cut at a specific site in each repeat to yield the mature CRISPR RNAs (crRNAs). Each crRNA contains one entire spacer sequence plus recognizable "handles" provided by short 3' and 5' flanking regions derived from the adjacent repeats. The precise cutting is done by a complex of the CAS proteins called Cascade. Some of these proteins remain bound to the crRNAs to form the active defense agents. The spacer sequence provided by the crRNA is thought to recognize and guide the complex to the specific target sequence; then one (or more) of the proteins with nuclease activity cuts the invading nucleic acid. Since all the spacers are constitutively transcribed and processed into active defense agents, the host is continuously on guard against all the corresponding phages and plasmids.

When this story first came to light, piece by piece, there were speculations that the CRISPR mechanism might be analogous to RNA interference in eukaryotes. Indeed, there are analogous steps involved in the formation of the active defense complexes in both systems. However, in bacteria, the target is foreign DNA, not RNA. Evidence? Spacers complementary to either the coding or non-coding strand of phage λ confer resistance. Other experiments demonstrating this used the CRISPR locus of a clinical isolate of Staphylococcus epidermidis and a plasmid with an intron-containing gene. Here the researchers experimentally introduced spacers that matched either the plasmid's gene sequence (including the intron) or the corresponding spliced mRNA sequence (lacking the intron). Only spacers against the intron-containing DNA sequence were effective.

That said, I have to mention that the Archaea, as usual, do it their own way. CRISPR loci have been found in virtually all sequenced archaeal genomes, but they target foreign RNA, not DNA. (That opens to door to all sorts of evolutionary speculations!)

How do phages evade CRISPRs?

The bacterial CRISPR defense is very finicky and will cleave foreign DNA only if it contains a sequence that exactly matches a spacer. Thus phage evasion is only a single base change away. That phage do indeed escape this way has been shown by challenging cultures with a phage for which they already have a spacer. One finds a small number of phages that are able to successfully multiply. A close look at the genome sequence of these phages typically reveals a single nucleotide change in the protospacer. (The archaeal system is less exacting, requiring more than one nucleotide change in that region for escape.)

Although protospacers are found on both coding and non-coding strands throughout the phage genome, their locations are not entirely random. They are always just a few base pairs from a short motif that is recognized by the CRISPR system. Phages without that motif in their genome are immune. Another evasion trick used by viruses and other mobile elements is to insert themselves in one of the CAS genes or otherwise interfere with the operation of the CRISPR. This might be one of the factors that make it worthwhile for hosts to carry more than one CRISPR locus. (The current record is 18 loci, accounting for 1% of the genome in the archaeon Methanocaldococcus jannaschii.)

Do mobile elements also use CRISPRs?

Since all the genes needed for a CRISPR defense system are clustered together, whole CRISPR loci are good candidates for swapping around by horizontal gene transfer. Already CRISPR loci have been found on at least 10 megaplasmids. This has a couple of implications. For one, megaplasmids may be the vehicle by which entire loci travel between bacterial lineages. Phylogenetic evidence clearly shows that such transfers have happened. These plasmids might also be using CRISPRs to compete with other plasmids for their bacterial hosts. Indeed, some CRISPR-bearing plasmids have spacers that target the slightly different CRISPR genes on other, potentially competing plasmids. Viruses themselves may also use CRISPRs. Two Clostridium difficile prophages carry CRISPR loci — possibly a mechanism to limit superinfection by other phages.

This plot of the abundance distribution of CRISPR spacers reflects the history of horizontal transfer of the CRISPR locus between the Leptospirillum strains sampled from two Richmond Mine locations. The number of occurrences of each spacer was counted at each location and plotted. A and B = the two locations. Red = spacers found at both locations; blue and green = spacers present in only location A or B.
The most abundant spacers at both locations are the older spacers that were present prior to the horizontal transfer between the two strains; the less abundant spacers were acquired more recently, after the transfer, and thus they are found in fewer individuals and in only one location. Other analyses show that they are located at the leader end of the array. Source

What can we learn from CRISPR arrays?

A CRISPR array is akin to a fossil record that reveals the history of previous viral challenges. New spacers are added at the leader end of the array, the oldest spacers are found at the trailing end. Mechanisms for eliminating old repeat/spacer pairs limit the growth of the array and also can produce gaps in the history. Nevertheless, close scrutiny of an array can tell us much about the bacterium's past.

The Banfield lab used this record to uncover the history of closely-related strains of Leptospirillum group II sampled from two acid mine drainage locations in the Richmond Mine. (Click here for Elio's earlier post about the archaeal inhabitants of this mine.) These are extreme environments: pH ~1, temperature ~40 °C. The story told by their CRISPR arrays is that the strain at one location had acquired their CRISPR locus from the other by HGT. Evidence? Overall, their genomes show only 94% identity, but the 5 kb region that spans their CRISPR loci is identical (except for the spacers). Based on more detailed analysis of the strain from one location, the researchers note that the population appears to be nearly clonal, except for their rapidly-evolving spacers. Indeed, the spacers are so heterogeneous that no two sampled individuals in that population share the exact same complement.

CRISPRs reduce the frequency of horizontal gene transfer. By defending against incoming phage or plasmid DNA, they erect a barrier against two of the main mechanisms of HGT: transduction via viruses and conjugation via plasmids. Where there are many CRISPR loci, plasmids are less common. Streptococcus thermophilus, for example, has 12 CRISPR loci and few plasmids. Since plasmids often carry antibiotic resistance genes, some people think that CRISPRs might be helpful allies in our attempts to reduce the spread of antibiotic resistance. From the bacterial perspective, though, plasmids can be useful sources of specialization genes — genes for antibiotic and heavy metal resistance, fermentation of sugars and aromatic compounds, toxin production, and restriction-modification systems, among others.

A CRISPR defense can also make it difficult for a temperate phage to insert as a prophage. In some bacterial groups, there is a negative correlation between the number of prophages and the number of CRISPR arrays. Excluding potential prophage can be another cost to the host since prophages can provide useful genes (e.g., virulence genes such as those for the diphtheria and cholera toxins). Thus, when evaluating the fitness costs of CRISPRs, it may be necessary to factor in these long-term ecological and evolutionary costs, as well.

So, when shopping for an anti-phage defense, which is the best buy — a first line defense or a CRISPR locus? Or both?

Very helpful, interesting and well written. I would like to share a question: can a spacer occur in two different positions
in a given CRISPR array?