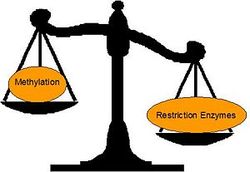 First, something about R-M systems. The modification part of an R-M system is a DNA methyltransferase (aka methylase) that recognizes a 4–8 bp palindromic sequence of double-stranded DNA and methylates the cytosine or adenine bases therein. The preferred substrate for these methylases is the hemimethylated DNA that is produced by replication of the host chromosome. A bacterial chromosome typically contains hundreds of recognition sequences. All of these sites need to be methylated at all times to protect the cell from the other half of the R-M system — the restriction endonuclease. This endonuclease recognizes the same sequence as its cognate methylase and makes a double-strand cut if the site is not methylated. The methylases need to be abundant and fast as one such cut, unrepaired, means death to the cell. When a DNA phage genome or other foreign DNA containing unmethylated target sequences enters the cell, it is subject to cleavage by the host's endonuclease. It can also be methylated by the resident methylases, although this proceeds far more slowly than methylation of the hemimethylated host chromosome. Usually the endonuclease strikes before the methylase finishes its job. 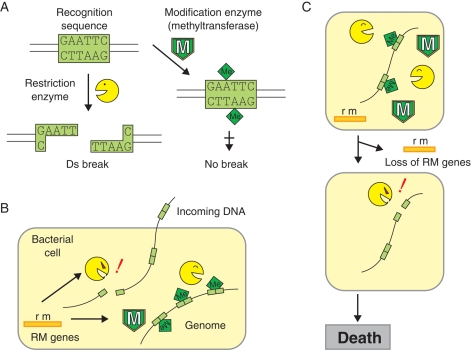 Action of a Type II R-M system. (A) The restriction endonuclease makes double-stranded cuts at unmethylated recognition sequences, whereas methylation of that target sequence protects the DNA from cleavage. (B) Incoming DNA with unmethylated target sequences is cleaved by the host's endonuclease, while the host's own methylated genome is immune. (C, upper panel) A bacterial cell with an R-M system. Its chromosome is fully methylated and thus is protected from the endonucleases present. (C, lower panel) After loss of the R-M genes, the methylase is eliminated first, DNA methylation decreases, and the persisting endonucleases attack unprotected sites, usually killing the cell. Sometimes chromosome breakage is repaired, with or without genome rearrangement. Source

Several types of R-M systems are known. The most studied ones are the Type II systems composed of two or three separate proteins: the endonuclease, the methylase, and sometimes a controller protein. Most of what follows applies specifically to this type. The hundreds of different restriction endonucleases known show no significant amino acid sequence similarity to each other — not even those that recognize the same target sequence. However, some structural similarities can be detected. This is interpreted as possible evidence of their rapid evolution from a common ancestor.

In  a 1995 paper, Kusano and colleagues note: It is widely accepted that the evolution and maintenance of restriction-modification (RM) systems have been driven by the protection from foreign DNA that they afford to cells. This view has been frequently echoed by others. How effective are these R-M systems as a phage defense outside the lab?

Not very, we've come to realize. Their protection is leaky at best. Depending on the particular players, one phage in a hundred to one in a hundred thousand is methylated before the endonuclease strikes. Given the large numbers of bacteria and phage in a "colony," one phage is likely to succeed and the invasion is now on. That phage can launch a lytic infection, and its progeny, also being methylated by the cell's resident methylase, will be able to infect nearby bacteria that have the same R-M system. 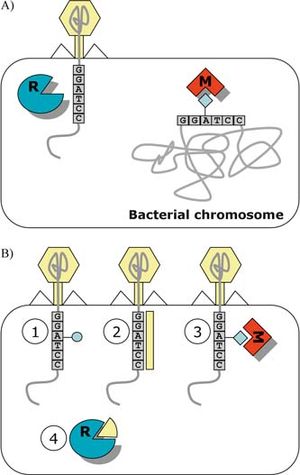 R-M systems as an anti-phage defense and phage evasion strategies. A) The general function of a Type II restriction endonuclease (R) and methylase (M). B) Examples of phage strategies for evading. (1) incorporation of an unusual base; (2) use of phage proteins to mask restriction sites; (3) stimulation of host methylase activity so that phage DNA is methylated before it is cleaved by the endonuclease; (4) inactivation of the endonuclease by phage proteins that mimic DNA and bind tightly to the enzyme. Source

Phages also have numerous other strategies for more reliably countering restriction. Some carry their own methylase with them, thus ensuring that their genomes are always protected. Others block the activity of the host's endonuclease or increase the efficiency of the host's methylase for unmethylated (read "phage") DNA. Still others incorporate unusual bases into their genome to foil the endonucleases. And some dodge by eliminating from their genome the target sequences used by their host, a tactic known as palindrome avoidance. Even just reducing the number of targets per genome improves their chance of survival.

If it is so easy for phages to counter the R-M defense, how come R-M systems are so widespread among the Bacteria and Archaea? What has driven their evolution? One possibility is that R-M systems are selfish mobile elements and that phage defense is merely a collateral benefit for the host. Evidence? First, R-M systems show numerous signs of mobility. The methylase and endonuclease genes are tightly linked on the chromosome, which makes it easy for them to be transferred together by horizontal gene transfer (HGT). Furthermore, they are often found associated with prophages or mobility-associated genes. As is typical for genes that have traveled by HGT, their distribution is patchy among related species or strains, and they differ from the rest of the host chromosome in both their GC% and their pattern of codon usage.

Their selfish nature becomes apparent under other circumstances. An R-M system will kill its host cell to maintain its own relative frequency in the bacterial population. To wit, suppose a cell loses its R-M-carrying plasmid (or when the R-M genes are located on the chromosome, suppose those genes are replaced by homologous recombination). The cell will then be killed in the same manner as seen following loss of a toxin-antitoxin addiction module. Death occurs because the endonuclease ("toxin") has a longer half-life than the methylase ("anti-toxin"). Since the methylase is eliminated first, newly synthesized chromosomal DNA will be undermethylated and thus vulnerable to cleavage by the persisting endonuclease proteins. A single cut by the endonuclease can kill the cell.

Similarly, imagine that a second plasmid tries to invade the cell. Imagine further that the invading plasmid carries an R-M system that uses a different recognition sequence but the same regulatory mechanism. The active resident system immediately induces expression of the incoming endonuclease gene, the endonuclease cleaves the unprotected sites in the host chromosome, the cell dies, and the would-be R-M invader is prevented from gaining a toehold in the population.

What happens if instead the invader uses the same target sequence as the resident R-M system? Its DNA will be immune to the resident endonucleases, its invasion successful. The cell now carries two systems, but is addicted to neither one. If either one is lost, the cell survives, along with its remaining R-M system. Therefore, for an R-M system to be able to defend its host turf against other selfish elements requires evolving a recognition sequence of its own. This could be the factor fueling the evolution of many R-M systems using different recognition sequences. Indeed, that more than 50 different R-M specificities have been found among natural strains of E. coli suggests that something of consequence is going on here.

So who are the real winners? It seems that victory goes to the selfish. Although the host gains some protection against phages and other foreign DNA, for this it sometimes pays with its life. Furthermore, restriction creates a kind of reproductive isolation for the host; when DNA arrives by transduction, transformation, or conjugation, only that from kin or other sources with the same methylation pattern escapes the endonuclease. On the other hand, molecular biologists now have at their disposal hundreds of restriction endonucleases with different specificities. That has made winners of us all.