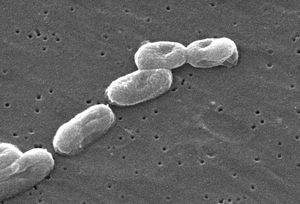 Burkholderia under a scanning EM. Source

Thanks to the extensive research of the past ten years, we've become aware that many prokaryotic endosymbionts and habitual intracellular pathogens have undergone genome reduction over evolutionary time. Characteristic of this process, termed reductive convergent evolution, is the discarding of genes involved in metabolic pathways and regulatory functions that have become superfluous now that cells can scavenge host nutrients. The high percentage of noncoding DNA (including pseudogenes) found in many of these genomes probably represent obsolete genes on their way out. At the same time, there is an increase of transporter genes needed for the uptake of host-derived metabolites.

Here is one informative example: Burkholderia pseudomallei and Burkholderia mallei are b-proteobacteria that cause melioidosis and glanders, respectively in equines. B. mallei is a relative newcomer to the obligate pathogen lifestyle, having evolved only recently (ca 3.5 myr ago) from the free-living opportunistic pathogen B. pseudomallei. During this transition, B. mallei lost about 1.4 Mb of DNA, about 20% of its genome. Comparing these two bacterial genomes could, therefore, provide some insights into the mechanisms underlying the early stages of reductive evolution. 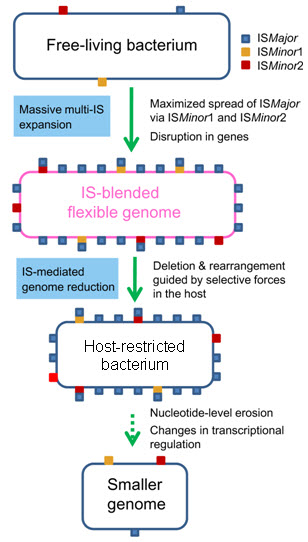 A proposed scheme for stepwise genome-reductive evolution in bacteria. Source

To that end, Song and co-workers recently analyzed the genomes of ten strains each of B. pseudomallei and B. mallei. They noted a massive proliferation of insertion sequence (IS) elements in the B. mallei genome, specifically ISBma1, ISBam2, and IS407A. Once inserted, ISBma1 and ISBma2 enhance the spread of IS407A by providing secondary insertion sites for that element. The proliferation of IS407A in turn led to increased genomic deletions and rearrangements through recombination. This fluidity of the IS-blended genome, combined with selective forces in the host, resulted in the deletion of dispensable genomic regions and the preservation of the essential regions — i.e., genome reduction.

When examined both in vitro and in vivo, B. pseudomallei and B. mallei displayed similar gene expression profiles. This is in sharp contrast to the situation in the aphid symbiont Buchnera, where most of its transcription units were altered over a 200 myr association with the host, compared to 3 myr for B. mallei. Thus, it appears that complex genomic alterations accumulate sequentially over long periods of time.

Identity at the nucleotide-level between B. pseudomallei and B. mallei is high (99%) and the two diverge mostly within simple sequence repeats (SSRs) with high mutation rates. More genes became disrupted by frame-shift mutations in the IS-rich B. mallei than in B. pseudomallei. Characteristic of loss of function in B. mallei is the absence of flagella due to disruption of the fliP gene by IS407A. Loss of motility has also been reported in the host-restricted pathogens Bordetella and Yersinia, suggesting that eliminating such redundant capabilities provides an advantage when living within a host.

In contrast to the sort of genome reduction seen in these habitual intracellular bacterial pathogens, Pseudomonas aeruginosa followed a different evolutionary pattern. P. aeruginosa can exist as a free-living bacterium that colonizes a variety of environmental habitats and also as an opportunistic pathogen of humans (as well as plants, nematodes, insects and other animals). It can cause a wide range of debilitating diseases in individuals genetically predisposed to such infections. Mathee and collaborators sequenced the genomes of two P. aeruginosa strains isolated from patients with cystic fibrosis (CF) and compared them to those from environmental P. aeruginosa strains. Thy found that the P. aeruginosa genome contains a conserved core that is interrupted in each strain by a different combination of specific blocks of genes acquired by horizontal gene transfer. These accessory components are located at limited chromosomal loci referred to as regions of genetic plasticity. Besides acquiring genes, strains also discard some genetic information, thus creating customized genomic repertoires that enable different strains to colonize diverse habitats. For example, the bacteria isolated from CF patients maintain virulence determinants located in their core genomes. In addition, one of these CF strains carries an accessory component (Dit Island) containing a cluster of 95 genes involved in diterpenoid metabolism. This allows the pseudomonad to grow in woody environments enriched with the abietane-type diterpenoid resins that are produced by trees.

These contrasting stories illustrate two different evolutionary strategies. One, pursued by Burkholderia mallei, displays genome reduction linked to the lifestyle of an intracellular bacterial parasite with concomitant restriction to the host. The other, exemplified by Pseudomonas aeruginosa, includes the acquisition as well as the discarding of genes. Thus equipped with customized genetic repertoires, P. aeruginosa enjoys the unconfined lifestyle of an opportunistic bacterial pathogen, its varied strains colonizing a wide range of habitats, including the human body. It seems satisfying that genomic design follows a logical path, at least in these cases.

Marvin is Professor emeritus in the Department of Biological Sciences at Hunter College of CUNY in New York City, and an Associate Blogger for Small Things Considered.

If only we were as talented as bacteria (or archaea)...