In a recent Opinion piece in Trends in Microbiology, Gemma Reguera invites us to think outside the box. The box in question harbors the notion that communication between microbes is chemical, and only chemical. Here, the author cuts through the confines of this perspective to point out that microbial communication also takes place via physical interactions.

By physical, Reguera means sound waves, electromagnetic radiation (mainly light), and electric currents. The latter, thanks to recent work on the function microbial nanowires, is the more familiar one. (Incidentally, this paper’s brief overview of the nanowire business is as clear as any I’ve seen.) Nanowires form grids between cells, clearly constituting an effective mechanism of communication. But further, Reguera proposes that many other microbes may communicate electrically, all being polarizable and many being known to respond to electrical reorientation (i.e., galvanotaxis). 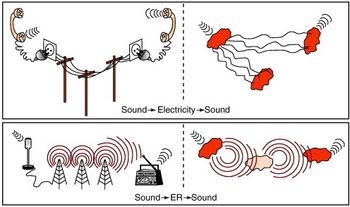 Interconversion of physical signals in human communication networks (left) and microbial analogs (right). In all panels, the sender is on the left, the receiver on the right and information carriers in the middle. In a manner analogous to the interconversion of sounds and electric signals in fixed telephone lines, microbial cells might be polarized by incoming sound waves of the correct frequency to control the flow of electrons, and electric currents generated or received by the cell and vice versa (top panel). The interconversion of electromagnetic radiation (ER) and sounds during radio broadcasting could also have a microbial analog (bottom panel). The intracellular movement of charged particles that is induced by sound waves could create an electromagnetic field and serve as a source of ER. The reverse would also be possible: ER might induce mechanical vibration and polarization of the cell, thereby enabling the generation of sounds and electric currents, respectively. Source

Physical means of communication are not limited to the electrical. Sounds waves count, as does light. For one example, sound waves are reported to stimulate the growth of a Bacillus species (B. carboniphilus) under stress conditions. For other evidence for this surprising proposition, I refer you to the paper. Perhaps more settled is the notion of light playing a role in microbial physiology. Besides bioluminescence, some light is emitted by cells as biophotons, weak light emissions in the visible and near infrared, the result of exergonic chemical reactions. The author says: The continuous motion of charged particles inside the cell generates an electromagnetic field, and therefore, a potential source of electromagnetic radiation. Interestingly, the wavelengths of the electromagnetic spectrum that appear to affect microbes overlap those of the sizes of microbial cells (~0.1 to 100 μm).

When does physical communication trump chemical? One easy answer is when the signal is faint and requires a small energy investment. Thus, physical signals work best when the cells “whisper” to one another. Such signals also propagate faster, not being limited by diffusion of molecules, and neither do they require membrane receptors. But we have just scratched the surface and much remains to be learned about these relatively unfamiliar phenomena. Reguera ends her captivating article by stating: Physical signaling could be an ancestral language of all living forms and, perhaps, a key code to decipher if we want to understand the microbial conversations that have for so long remained inaudible.