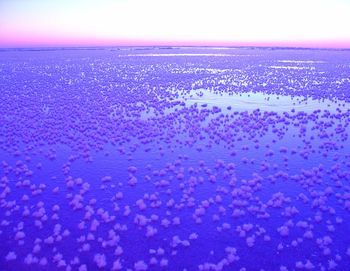 Biofilms are the hallmark of microbial life in all manner of natural and engineered settings. The defining features of a mature biofilm include high densities of microbes, association with a surface, and extracellular polysaccharide substances (EPS) — often very specific compounds — that give architectural structure to these habitats. But what about early stages of biofilm formation. How many microbes does it take to make a biofilm, and how much of what type of EPS to provide structure? What if the involved surface can provide enough architectural structure itself yet is always changing? What if that “surface” is sea ice?

For literally centuries, polar explorers have been aware that in the springtime the bottom of seasonal sea ice becomes visible discolored. Today we know that what they were seeing is a photosynthesis-based biofilm of grand proportions. By March, when the sun spends enough time above the horizon to initiate the ice-algal bloom, the sea ice cover over the Arctic Ocean alone (sea ice also surrounds Antarctica, of course) extends more than 14 million square kilometers, even in this era of climate-driven reductions in the cryosphere. Only in the last decade, however, have we realized that this highly porous sea ice, flushed at its ice-water interface with seawater from below, is also filled with EPS, the sticky exudates of microscopic algae and bacteria that partially account for their entrapment in the ice as it forms in autumn and through winter. These compounds, which partition into the brine phase of the ice along with the microbes and other “impurities” of seawater, are now understood to serve a myriad of biological functions within the ice, from cryo- and osmoprotection to possible viral defense. As winter progresses and the ice chills to temperatures below –20 °C near its upper surface, this porous habitat undergoes marked physical changes. Whereas the warmer (–2 °C) bottom ice is still about 20% liquid, in the upper deeply frozen horizons of the ice the inhabitable volume is reduced to 2% or less. As a result of this temperature-driven process, microbes and everything entrapped in the ice with them become concentrated into increasingly small, cold, and briny pore spaces, with no obvious outlets even as ice crystals encroach. 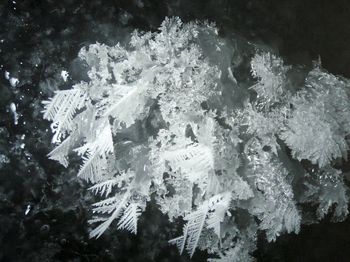 Sounds rough. Yet, evolution has a way of ameliorating situations that, to us, will always seem intolerably extreme. Both Bacteria and Archaea survive well even in the coldest portions of wintry Arctic sea ice (down to –28 °C). However, to survive the winter, eukaryotic ice algae and other protists must keep migrating downwards into the warmer, wetter bottom ice and waters as the ice grows thicker. Note that this sea ice is not to be confused with glacial or freshwater ice, the far less porous and less inhabitable type of ice that covers Greenland and Antarctica. Recent work including detailed microscopic evaluations of winter and spring sea ice has revealed how that versatile, biofilm-essential material called EPS works to keep the living quarters of microbes within the ice habitable. The extracellular material alters the physical properties of the ice, providing more occupiable pore space than otherwise possible at a given temperature. Although the ice matrix itself is providing the architectural structure to this habitat, components of the EPS (likely glycoproteins) sculpt the ice to the benefit of the microbial inhabitants. There is even evidence to suggest that if not enough EPS was entrained when the ice first formed, the entrapped bacteria will produce more of it as conditions worsen in winter. 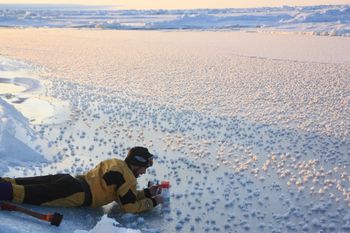 But wait. Are the microbes inescapably entrapped during winter, with no way out? As atmospheric temperatures drop in fall and winter and sea ice forms, the thin young sea ice does indeed offer a way out for its inhabitants, and not only in the downwards direction as brine is gravitationally expelled back into the ocean during the freeze-up period. Liquid brine of high salinity (e.g., > 20% salt) also expels upwards onto the surface of the ice, where it forms a wet film that does not freeze even at very low atmospheric temperatures. Instead, if the air-ice thermal gradient is sharp enough, the air moisture great enough, and the ice-nucleating particles numerous enough, vast fields of frost flowers will grow on the surface of the new ice (Fig. 1), wicking the surface brine into their dendritic “petals” (Fig. 2). These salty frost flowers, long known by polar explorers for their aesthetic beauty, have recently become subjects of scientific interest given their unique light-scattering properties and their ability to concentrate chemical contaminants (like mercury) from the atmosphere. They are expected to increase in areal extent with continued Arctic warming, as more water opens in winter to freeze again as thin ice. Not until last year, however, were frost flowers reported to contain bacteria, and plenty of them relative to the underlying ice, as well as high concentrations of EPS in some cases. Here then, under extreme conditions on the frozen surface of an ocean, there forms what may be considered another vast biofilm, even if an ephemeral one. Newly discovered, it awaits further exploration. You can well imagine all the planning and sampling (Fig. 3), culturing and extracting, sequencing and modeling rather excitedly underway!

Prof. Deming holds the Walters Endowed Professorship
in the School of Oceanography at the University of
Washington in Seattle.

Krembs C, Eicken H, & Deming JW (2011). Exopolymer alteration of physical properties of sea ice and implications for ice habitability and biogeochemistry in a warmer Arctic. Proceedings of the National Academy of Sciences of the United States of America, 108 (9), 3653-8 PMID: 21368216