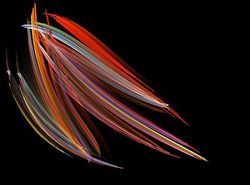 For some time, I've had the urge to learn something about diatoms. They are dazzlingly beautiful, relatively easy to manipulate, and have left a fossil record immense in quantity. I never had followed up on this yen, so here’s my chance. A recent paper shed light on the way they make their hard shells.

Diatoms are busy creatures, accounting by their photosynthesis for about 20% of the global primary production of organic material, an amount comparable to that produced by the tropical rain forests. They are single cells contained within a shell made up of glass (silica), which is what gives many of them often stunning shapes. Silica does not readily decompose and fossil diatom shells accumulate in prodigious quantities. Such deposits can be hundreds of meters deep in some places (fossils by the truckload!). Diatomaceous earth, as the rock consisting of fossil diatoms is called, has a large number of industrial uses, such as filtering pool water, absorbing oil spills, as a mechanical insecticide, as a mild abrasive (it may well be in your toothpaste!), and even as a component of dynamite! And, as we will see below, diatoms also have novel and unexpected uses. 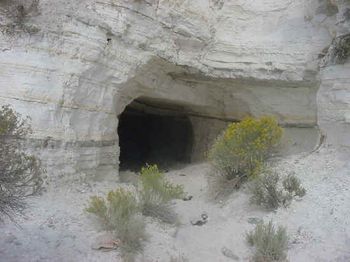 Tunnel entrance to a diatomaceous earth (diatomite) mine. Source

Diatom fossils are known from about 100 million years ago. However, earlier fossil diatoms may have escaped detection because, though highly resistant to wear and tear, silica sometimes recrystallizes under pressure. In some lake sediments, diatoms have accumulated in layers that correspond to annual cycles and serve as indicators of past environments. They are a limnologist’s delight.

Now that we’re hooked, let’s ask: how do diatoms make their exoskeletal shells? This is not different in principle than asking how other hard-shelled microbes make their hard parts. Among these are different aquatic protists, such as coccolithophores, foraminifera, radiolaria, shelled amoebas, and others, all of which deserve future space in this blog. “Hard biology” (which I here use as a term for the study of shells, mineral inclusions inside and outside of cells, bones, teeth, beaks, and others) is not the kind of stuff that us “soft” biologists usually pay much attention to. But, obviously, hard structures are essential for life. Plus, they are interesting in themselves and biomineralization is a topic that deserves attention.

Electron micrograph of T. pseudonana in side and end view. Source

Offhand, there are two ways of constructing an exoskeleton: on the outside of the organism or within it. Insect and mollusk exoskeletons are built on the outside from molecular components, whereas most unicellular organisms assemble precursor structures within their cells. The size of these internal structures varies greatly, but they have in common a dependence on complex extrusion mechanisms. In bacteria, we know that the precursors of the peptidoglycan exoskeleton are exported from the cytoplasm via lipid carriers and are then assembled outside the cytoplasmic membrane. In protists such as diatoms and coccolithophores, plates destined to become part of the shell are also made within and then extruded (it's one thing to call this exocytosis, another to understand how it works). The plates are then inserted into the extracellular growing structure. The interest in all these cases is in the details of the mechanisms. For diatoms, recent studies on shell formation have turned out to be quite revealing.

The model for studying diatom shell morphogenesis is Thalassiosira pseudonana, a freshwater and marine species whose genome has been sequenced and that can be used for genetic transformation. The shell of the organismis in the shape of a cylinder with two overlapping half shells or thecae. Each circular lid-like end is called a valve.

Schematic drawing of a T. pseudonana in side view. Source

Around the middle of the cylinder are ring-shaped structures, the girdle bands. The process of making the silica shell takes place on an intracytoplasmic scaffold made up of recently discovered proteins called cingulins. These are insoluble proteins that, thanks to a GFP fusion, have been located in the girdle band region and not in the valves. It follows that shell formation takes place at the middle and not at the ends of the cell. The cingulin matrix appears to act as a template for the deposition of silica structures along preferred sites. Between these sites, supramolecular aggregates of soluble biomolecules (e.g., proteins called silaffins, the silacidin phosphopeptides, and long-chained polyamines) self-assemble and participate in the process of silica deposition.

Cross section of a diatom cell (center) and its cell cycle. (1) Shortly before cell division the cell wall contains the maximum number of girdle bands; (2) after cytokinesis new silica (red ) is formed in each sibling cell inside a valve SDV (yellow); (3) expansion of the valve SDVs as more and more silica is deposited; (4) each SDV contains a fully developed valve; (5) the newly formed valves are deposited in the cleavage furrow by SDV exocytosis; (6) the sibling cells have separated; (7+8) expansion of the protoplast in interphase requires the synthesis of new silica (red) inside girdle band SDVs (yellow); each girdle band is synthesized in a separate SDV, and after SDV exocytosis is added to the newly formed valve (hypovalve); (9) after synthesis of the final hypovalve girdle band cell expansion stops, and DNA replication is initiated. Source

What is exciting here is that cingulin-containing structures work in vitro, that is, they become mineralized upon the addition of silicic acid. The resulting structures are replicas of those seen in the diatom cells themselves. Of course, this finding opens the door for further investigations on the details of shell formation. The authors suggest a model whereby the insoluble organic matrix acts as a template for the deposition of silica structures. The process starts within an intracytoplasmic vesicle, the Silica Deposition Vesicle (SDV) which contains a ring-shaped structure of insoluble cingulin. The shaping of the SDV membrane and its positioning is presumably under the control of the cytoskeleton.

Soluble silicic acid is taken up from the environment, transported into the SDV and deposited on the insoluble ring. The vesicles and their cargo are then exocytosed to the outside of the cell and the insoluble rings become attached to previously formed structures, apparently by enzyme-catalyzed fusion. Of the details of this process that remain to be uncovered, I find particularly puzzling how the silica-ring containing vesicles are extruded to the outside surface of the cells. The coccolithophores have the same problem with the subunits of their carbonate shells, the coccoliths. To put this in perspective, we quote: The coccoliths are rather large relative to the cell size; if scaled up to human size it would be like a person giving birth to a car wheel or a dustbin lid. (Or ”trash can,” for us Yanks.) 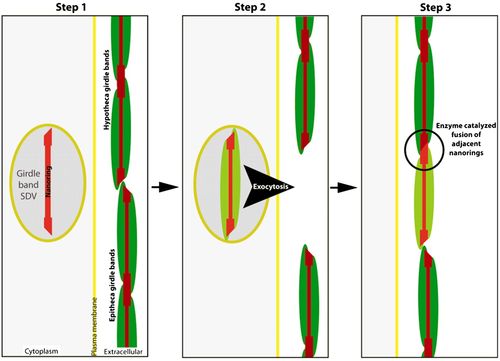 Model for girdle band biogenesis in T. pseudonana. SDV = Silica Deposition Vesicle. Green = silica structures. Step 1: An insoluble cingulin-containing organic nanoring is present in a developing girdle band SDV. The shaping of the SDV membrane and positioning of the girdle band SDV are presumably under control of the cytoskeleton. Step 2: Following uptake of silicic acid into the SDV, the nanoring together with soluble organic components (e.g., long-chained polyamines, silaffins, silacidins) are templates for the formation of the girdle band silica inside the SDV. Step 3: After exocytosis the newly formed girdle band is attached by enzyme-catalyzed fusion with the cingulin-containing nanoring of the neighboring girdle band. Source

Understanding how such complex molecular structures self-assemble in diatoms may open the door for making all sorts of useful and interesting configurations that may be applied in nanotechnology and elsewhere. Thus, they may be used for making special filters, molecular sieves, insulators, optical coatings, and sensors for all kinds of components in water and elsewhere. They could also be used in making solar cells, scaffolds for cells or proteins, and more. We quote:  Through the use of self-assembling proteins that contain peptide domains with desired mineral forming activities it should become possible to generate biomimetic organic-inorganic hybrid materials with tailored 3D structures for a wide range of applications in nanotechnology.

Not only may there be a diatom in your future, but the details of their “hard biology” transactions continue to intrigue us.

Scheffel A, Poulsen N, Shian S, & Kröger N (2011). Nanopatterned protein microrings from a diatom that direct silica morphogenesis. Proceedings of the National Academy of Sciences of the United States of America, 108 (8), 3175-80 PMID: 21300899