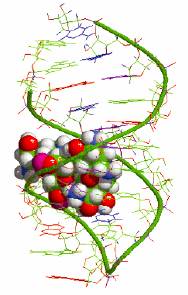 A DNA aptamer nestled on its
target. Source

Picture yourself looking for a molecule that specifically inhibits an enzyme, impairs the binding of a ligand to a receptor, or does some other such wonder. Classically, one thinks of antibodies, but these require a lot of work and are not easy to come by. Easier is to fish out the desired molecule from a large pool of oligonucleotides or peptides. You do this by mixing the gemisch with whatever target you have in mind and looking for what binds to it. In the case of oligonucleotides, the candidate molecules can then be readily amplified. What you get are called aptamers. Typically, aptamers bind to their targets with high affinity and specificity, comparable to that of monoclonal antibodies.

The term "aptamer" derives from the Latin aptus, to fit. RNA and DNA aptamers have the ability to form complex 3-D structures, which endows them with a high degree of specificity for the target molecule. Aptamers can detect very small structural changes in their targets, such as the presence or absence of a methyl or hydroxyl group, or different enantiomers. For example, an aptamer to theophylline binds with 10,000-fold lower affinity to caffeine — two molecules that differ by only a single methyl group (1,3-dimethylxanthine and 1,3,7-trimethylxanthine, respectively).

To look for nucleic acid aptamers, one screens a large library of oligos (containing as many as 1020 different ones, each usually 40-60 nucleotides long) by repeated rounds of selection and amplification. This is called the SELEX process. Since this is all done in a test tube, one can select for aptamers that work under specific binding conditions, such as salt concentration, pH, and temperature. SELEX can be automated. Usually, aptamers have a long shelf life plus they have other attributes that make them good candidates for therapeutics.

For a more detailed account, click here or here. If you want to see videos of live people playing the aptamer game or animations thereof, search for “aptamer” with Google Video.

I like 3-D structure it seems everything clear Aptamers have a long shelf life plus they have other attributes that make them good candidates for therapeutics.