« Of Terms in Biology: Riboswitch | Main | Preaching to a Prokaryotic Choir »

A Clever Bug That Is Difficile to Control

New infectious diseases emerge with worrisome frequency. Some accompany natural events such as changes in climate, while others surface with human help. Of great importance among the latter are the infections caused by Clostridium difficile (casually called C. diff). The prevalence of these infections is related to the use of certain gut-cleaning antibiotics such as clindamycin. In the pre-antibiotic era, C. diff infections were unknown, although they probably occurred once in a while.

A teichoic acid from Micrococcaceae. Source

C. diff is a Gram-positive sporeformer that is now the foremost cause of nosocomial diarrhea worldwide. It can also cause more serious, life-threatening diseases, such as pseudomembranous colitis and, in elderly patients, a condition called toxic megacolon. The organism produces two powerful toxins that disrupt the host cell cytoskeleton. Usually this organism takes root in the intestines when the competing normal microbiota has been disrupted by antibiotic therapy. The classic homes for C. diff are hospitals and nursing home environments where ingestion of airborne, highly resistant spores is the usual source of infection. Relapses of C. diff infection (CDI) occur in about 20% of cases and can occur multiple times. Not only is the incidence of CDI on the rise (a 35-fold increase in the UK over the last decade), but there has been a concomitant increase in the severity of the disease, reflecting the emergence of highly virulent strains. This is not surprising, as C. diff displays a high degree of genomic fluidity (detailed here and here). On the other hand, hospitals are now doing a better job of controlling C. diff infection by paying more attention to hygiene (washing hands and bleaching surfaces in rooms where patients have been housed), by segregating C. diff patients, and, in some places, by instituting strict guidelines for antibiotic use. In recent years there has also been a sharp increase in C. diff infections in otherwise healthy individuals who are neither hospitalized nor taking antibiotics, thus attesting to this bug’s high degree of virulence and contagiousness. 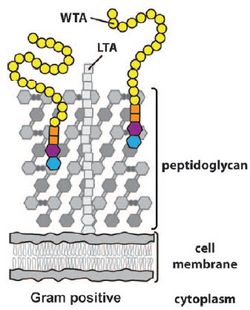 Much research is being conducted on this important pathogen. I single out the work done on its teichoic acids, which illustrates some of the formidable defenses that C. diff possesses against attack by our immune system. But first, what are teichoic acids (or TAs)? The term is derived from the Greek τειχος, teichos, "wall" because they are found in the cell walls of Gram-positive bacteria, embedded partly within the peptidoglycan layer. These are unique polysaccharides built using glycerol phosphate or ribitol phosphate units joined via phosphodiester bonds. They belong to a large family of diverse glycopolymers that differ among bacterial species. There are two kinds of TAs: the Wall Teichoic Acids or WTAs that are linked to the peptidoglycan via its N-acetylmuramic acid, and the Lipoteichoic Acids, or LTAs, that are anchored in the cytoplasmic membrane. Both types extend through the peptidoglycan and are exposed on the cell surface. 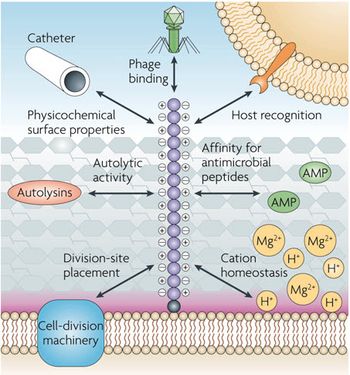 The roles of WTA and LTA. Source

The primary function of TAs is to provide rigidity to the cell wall, but TAs are good at multitasking and are involved in many other non-structural activities. LTAs modulate the activities of autolysins, maintain cation homeostasis, and determine the electromechanical properties of the cell wall. LTAs also act as receptors for certain bacteriophages. Some of these activities are shared by the WTAs. Within a host, TAs are recognized by Toll-like receptors 2 and 4, thus announcing their presence. In their interactions with the innate immune system they function as inducers of proinflammatory cytokines, as complement activators, and as immunogens and mitogens. In addition, they also serve as adhesins for binding to host cells and for biofilm formation. What a repertoire of virulence factors! Not surprisingly, TAs have been directly implicated in the virulence of Listeria monocytogenes, Group B strep, Staphylococcus aureus, and others. The role played by TAs in physiology and host interaction is reviewed by Weidenmaierand Peschel.

One unusual attribute of LTAs is that they can be modified by the addition of D-alanine, an alteration that renders the bacterial cell wall more positively charged and profoundly affects many of the activities I named above. An aside: Why, of all the possibilities in the vast list of small bioorganic molecules, was D-alanine chosen? But then, bacterial cell walls are full of biochemical surprises (think peptidoglycan, LPS). To quote from a review by Neuhaus and Baddiley: It is curious that nature has chosen D-alanine, a stereoisomer opposite to that in proteins, as a unique metabolite to play roles in both peptidoglycan cross-linking and TA function in the bacterial envelope. D-Alanine may be an integral component of a regulatory system connecting the D-alanyl esters of TA on the one hand and the D-Ala-D-Ala moiety of peptidoglycan on the other. It is possible that by sensing and responding to changes in the D-alanine concentration, some bacteria gain a competitive advantage for growth in certain conditions or habitats. 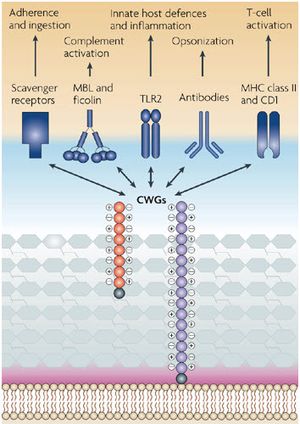 This last statement turned out to be prescient. In Bacillus anthracis, Listeria monocytogenes, Strep pneumoniae, and Staph aureus, D-alanylation of teichoic acids leads to resistance to cationic antimicrobial peptides (CAMPs), including the antibiotics vancomycin, nisin, and polymyxin B, as well as some of the host’s own antibacterial peptides (e.g., defensins and cathelicidins) and some made by the bacterial microbiota itself (certain bacteriocins, including CAMPs). The change in the charge of the cell surface from net negative to net positive by D-alanylation prevents CAMPs from binding, thus blocking their bacteriocidal activity.

Recently, McBride and Sonenshein found that this story applies to C. diff as well, but with some wrinkles special to this organism. C. diff responds to the presence of the CAMPs cathelicidin, vancomycin, nisin, and polymyxin B by increased transcription from the dltD operon. Thus, D-alanylation is reserved for when needed. An insertion mutant of C. difficile in which the dltD gene was disrupted contained about 100-fold less D-alanine in its cell wall and displayed decreased resistance to CAMPs. In other words, in wild-type bacteria D-alanylation of teichoic acids neutralizes one of the host defense mechanisms against microbial invasion of the intestinal epithelium.

Once the normal microbiota is disrupted and C. diff is able to get a foothold in the intestinal tract, D-alanine decoration of its surface is just one of several mechanisms these clever bugs use to combat host defenses. No wonder C. diff is such a successful human pathogen.

In one of those bizarre internet moments, I came across the following article within moments of reading yours:

From factual to fecal in just a few clicks! However, the oodles of interesting science in yours is reduced to a paltry two sentences that don't appear to even have been fact-checked or spell-checked...oh, mass media "science!"