« Hard Biology | Main | A Clever Bug That Is Difficile to Control » 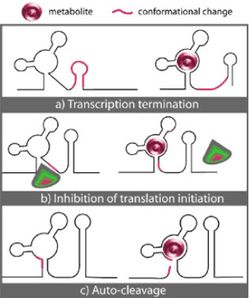 Three known mechanisms of riboswitch action after ligand binding. Red indicates the segment of the riboswitch mRNA that undergoes a conformational change upon binding of the ligand. Ligand binding leads to: (a) formation of a rho-independent transcription terminator
hairpin loop that terminates transcription; (b) sequestration of the Shine-Dalgarno sequence thus blocking translation initiation; (c) self- cleavage by the mRNA. Source

Recently we featured the term aptamer, and noted how useful these compounds are for researchers. We were talking of synthetic aptamers. But natural ones, in the form of RNA molecules, are part of an elegant mechanism that regulates gene expression in response to changing cellular levels of specific metabolites. These talented RNAs are known as riboswitches.

To be more precise, riboswitch is the name given to the domains in some mRNAs that bind directly to specific small molecular weight compounds and thus regulate expression of the genes encoded by that same mRNA. Riboswitches are generally located within the 5'-untranslated region of bacterial mRNAs. We need to define two more terms here, as a riboswitch is composed of two parts, also referred to as domains. One is a natural aptamer that possesses high specificity for a ligand and that adopts a different structure when bound to that ligand. Among Bacteria, these aptamer domains are typically 70-170 nucleotides long. The second domain is referred to as the expression platform as its job is to control expression of the adjacent ORF.How do they do it?The two domains overlap and influence each other. Binding of the ligand by the aptamer changes the conformation of the adjacent expression platform, which in turn represses expression of the ORF by interfering with either transcription or translation by a variety of mechanisms. Simple it isn’t.

So far at least 20 distinct classes of riboswitchs are known. Many are involved in feedback repression of genes required for the synthesis of their cognate metabolite. For example, there are riboswitches that bind to various amino acids or purines and regulate the genes involved in their metabolism, as well as ones that bind adenosylcobalamin and regulate vitamin B12 (cobalamin) synthesis. Of particular interest, riboswitches may explain how the key "second messenger" cyclic di-GMP regulates many different genes to coordinate complex cellular processes such as differentiation, switch between motile and biofilm stages, and virulence gene expression. Riboswitches that recognize cyclic di-GMP have been found associated with many genes known to be regulated by cyclic di-GMP.

Chalk up one more capability for the versatile RNAs.

For more about riboswitches, click here, here, or here.