Think about it: understanding what goes on inside any cell is hard enough. Add to that the complexities of being rod-shaped, and the mind starts to boggle. People have wondered about this aplenty. For sure, many expeditions  have set out to explore the poles of rod-shaped bacilli — how they are created, what molecules prefer to reside at this site and how this influences the physiology of the cell. In truth, definitive answers are generally wanting, but recent papers help us understand some of the complexities of rod-ness. A most readable review of the whole issue of polar localization is this one by Bardy and Maddock. 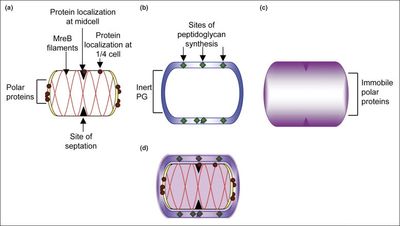 E. coli Cell Envelope Operating Instructions. (a) Proteins distributed in the inner membrane are found in distinct domains e. g., polar, lateral, and septal. Along the cylinder, some proteins are found at specific locations, perhaps by associating with future cell division sites, or because of the MreB helical filament. The membrane composition varies, with CL significantly enriched at the cell poles (yellow shading).
(b) The peptidoglycan layer is inert at the poles (darker shading). MreB-dependent and FtsZ-dependent insertion of new PG occurs along lateral edge and septum, respectively (green diamonds). (c) Polar outer membrane proteins are relatively immobile, as indicated by the darker shading. (d) Composite overlay of images (a–c). Source

A respectable number of reports describe the selective localization of proteins and lipids at or near bacterial poles and the septa. (See recent reviews by Kirkpatrick and Viollier and Shapiro, McAdams and Losick.) Proteins located at the poles include chemotaxis receptors (the first to be so localized), proteins involved in polar chromosome attachment, constituents of the cell division apparatus and their proteases, and many more. And, of course, there are such things as polar flagella, pili, and mechanosensitive channels. Overproduced proteins form aggregates (inclusion bodies) that end up at or near the poles, but that’s another story. Peptidoglycan also has a polar wrinkle in that the layerlocated at the poles differs from the rest in being metabolically inert; that is, it does not undergo turnover like that in the cylindrical part of the cell. So, bacteria are not just bags of enzymes. But how many times have you heard that?

Many questions arise, notably what certain proteins are doing at the poles. Here we will not deal with this question but will focus on how these proteins find their polar sites. Bacteria lack the vesicle systems used by eukaryotic cells for protein traffic, so how do they do it? The simplest thought is that proteins diffuse freely, either through the cytoplasm or along the membrane, eventually to become captured at magic sites containing alluring proteins. This, of course begs the question: how did those proteins get there?

Before going on, a note of caution: When anomalous proteins, such as those with GFP or other fusions, are expressed at high levels, they tend to aggregate into inclusion bodies that then end up near the poles. (See here.) This does not mean that the normally expressed proteins belong there. Thus, results with such fusions should be taken with a grain of salt. For more on fluorescent technology, see a review by Kentner and Sourjik.

Surely there are diverse mechanisms for polar localizations, but one stands out for its apparent simplicity. It’s the notion that phospholipids involved are curved in shape. Such phospholipids naturally prefer curved surfaces and therefore intercalate at sites where the membrane is  curved. These are, of course, the septa and the poles (keeping in mind that septa eventually become poles). When intercalated, these phospholipids contribute to making even greater curvature. “Polar proteins,” as the thought goes, then anchor to such curved sites. The cue to making poles may therefore not be chemical but geometric! Note that this works both for inserting material at the inner concave face of the pole or at the convex outside.

Key physical characteristics for quantifying curvature sensitivity of single cardiolipin molecules. A. Cardiolipin's unique dimeric structure, with two phosphatidyl head groups and four acyl chains, is indicative of a conical shape with a small radius of curvature Rlipid and hence a preference for highly curved geometries. B. The energy scale κ is set by the stiffness of the membrane for bending. C. The enhanced curvature of the pole is the difference between the curvature at the pole and at the cylindrical midcell, ΔCcell = 1/R. The combination of κ, Clipid,ΔCcell and the surface area Alipid determines the extent to which the molecule will preferentially localize at the pole. Source

But here’s the actual story. One of the main lipids in the E. coli inner membrane, cardiolipin (CL), localizes at the poles and septa of the cells. How come? First, a bit about CL. It makes up about 5% of the total phospholipids and differs from other phospholipids in being having a dimeric structure (of phosphatydylglycerol. See the figure). This unusual configuration makes CL assume the shape of a conical wedge (with a curvature value of ~1–5 nm−1), which favors its insertion into curved portions of the membrane. Calculations show that affecting membrane curvature requires the cooperation of several molecules of CL together because the bending strength of a single one is too weak. CL molecules found at non-pole locations may be kept from making large aggregates because — it is thought —  osmotic forces exerted on the membrane and cell wall keep high-curvature lipids from aggregating into domains. (See here and here.)

Of course, the proteins destined for localization must be able to recognize either CL molecules directly or the curvature they create. In fact, proteins with such intrinsic properties are known to exist, a fact well established for eukaryotes. In Bacillus subtilis, oligomers of the division protein called DivIVA insert at regions of negative membrane curvature, those of the sporulation factor SpoVM, at positive ones. For a discussion, see a review by Huang and Ramamurthi.

How has it been learned that CL likes being localized at the poles? This has been shown in two ways. First, the cardiolipin-specific dye 10-N-nonyl acridine orange (NAO) was used to demonstrate that cardiolipin is enriched at the cell poles and near potential division sites in E. coli, Pseudomonas putida and B. subtilis. Second, E. coli minicells (small round cells formed by division near the poles) are enriched for CL. Now the clincher: When the polar localization of CL was diminished by mutation or osmotic effects, the polar localization of a proline transport protein, ProP, and of a mechanosensitive channel protein also decreased.

But when you think of it, all these lovely findings represent correlations. More direct evidence would be welcome. Such is provided in a recent study by Renner and Weibel. They made large spheroplasts of E. coli by first inducing them to grow as filaments and then treating them with lysozyme. The cells became big spheres 3–4 μm in diameter. They now placed these in special microchambers of different diameters, some where the spheroplasts had to squeeze in and thus become elongated. (This reminds me of a song from the ‘40’s Please No Squeeze De Banana.) On squeezing in one dimension, CL became localized at the regions of greatest curvature, the artificial “poles.” MinD, a protein involved in cell division and known to oscillate from pole to pole co-localized with CL. Now, are you convinced that CL is involved in the localization of proteins at the bacterial poles? I am (for now).

The intricacies of subcellular organization are now emerging fast and furious. Note, for example the recent discovery by Lopez and Kolter of the bacterial equivalent of the lipid rafts in eukaryotic membranes. These spatially delineated membrane regions are surely involved in special functions. An example already reported is that mutants lacking some proteins needed for lipid raft formation are defective in a signal transduction pathway whose sensor kinase is normally located in the rafts. And if that were not enough to point to the intricacies of bacterial structures, Sun and colleagues (reviewed here) recently found that gliding motility in Myxococcus depends on the first known bacterial motor able to move in a directed manner between regions of the cell! Bags of enzymes, bah!

of course there are spirochaetes, is that at all related? How do their flagella get arranged in helices?

Barry,
A relationship between the curvature at the poles of rod-shaped bacteria and the helical shape of spirochetes is not self-evident at this time, being that the two represent different scales of size. Caulobacter, not nealry as curvaceous as spirochetes, owes its shape to a cytoskeletal protein called crescentin, but this does not necessarily deny a role for lipids arrangements in their morphogenesis. The helicity of flagella can be attributed to intrinsic properties of their protein, flagellin, which self assembles into helices.