Did van Leeuwenhoek Spend His Youth in France? 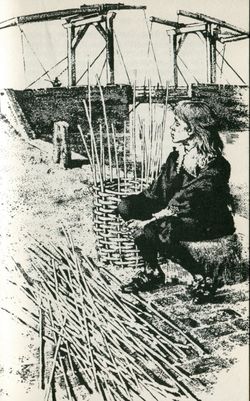 This title might be unexpected. Yet it is not without logic after reading a little book, The Cleere Observer: A Biography of Antoni van Leeuwenhoek, by Alma Smith Payne, published in 1970 by Macmillan in London. The booklet is amply and skillfully illustrated by Charles Pickard. According to the back flap Alma Smith Payne hopes she has managed to bring him (vL.) alive for young people. The booklet is well written and is very informative for persons not so young any more. In the booklet we read on page 23: Antoni’s father was a basket maker, as his father has been before him. This makes it plausible that young Antoni did make some baskets himself. Anyway, this is what we see on page 25 (figure 1). Presumably, to give it some Dutch flavor we see a canal and a drawbridge.

I am probably not the only one for whom this illustration rings a bell. In fact, it represents the drawbridge painted by van Gogh in Arles (France) in 1888 (figure 2). So there is a Dutch connection, although the connection is tenuous. A quick Google-search for the bridge in Arles brings one to a gasoline station named “van Gogh.”