How We Tell The Good Bacteria From The Bad

Recently, Yale’s Richard Flavell led a team of researchers into the most talked about and yet one of the least understood of microbial environments — the human gut. Rather than present the usual metagenomic characterization of the microbial population, he teamed up with Jeff Gordon at Washington University in Saint Louis and others to investigate one of the most important questions in the field: how does the host organism detect and respond to the replacement of its ‘normal’ gut bacteria with ‘abnormal?’

To get into this topic we need to spend a minute on the innate immune response and, specifically, the inflammasomes. These components of the innate immune system are multiprotein complexes that sense damage to the host. As the name suggests, they foster inflammation by promoting the maturation of precursors of cytokines involved in inflammation, such as interleukin 1-β and interleukin 18. When inflammasomes recognize one of many relevant signals, they assemble into a multiprotein complex, usually together with an adaptor protein called ASC (for apoptosis-associated speck-like protein containing a CARD). This complex governs activation of the protease caspase-1 with subsequent cleavage of the proinflammatory cytokines (including pro-IL-1β and pro-IL-18) into their active forms. 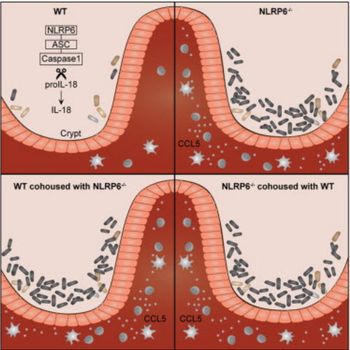 Schematic diagram of the mouse colitis showing the effect of the NLRP6 deletion and cohabitation of various mouse strains. Bacteria in the lumen represent the normal microbiome (light colored) or the colitis-associated Prevotella (dark colored). Source

Flavell and collegaues found that a deletion mutation in the inflammasome NLRP6 (NLR stands for Nod-Like Receptor) led to colitis in a mouse model. Interestingly, this led to dramatic changes in the composition of the gut microbiota. Specifically, the number of normal bacterial species decreased, with an increase in Prevotellaceae, members of the phylum Bacteroidetes. When germ-free wild-type mice were cohoused with conventional, non-germ free NLRP6 knockout mice, they developed the same gut microbiota composition as the mutants. Wild-type mice with normal gut microbiota cohoused with the mutants also showed an increase in Bacteroidetes, though to a lesser extent. The inflammasome response in the wild-type mice with the changed gut microbiota was similar to that in the NLRP6 knockouts. This suggests that the NRLP6-dependent signaling pathway is necessary for the development of colitis. Serum levels of IL-18 were increased in all of these mice. The authors also noted an increase in the CCL5 cytokine signaling pathway, which is known to drive the cleavage of pro-IL-18 to IL-18. The conclusion here is that the colitis-causing activity of the gut microbiota can be transferred to mice housed in the same environment.

Next, wild-type mice that had been infected with the Bacteroidetes-enriched microbiota from the knockout mice were cohoused with unaffected wild-type mice. The microbiota composition of these mice returned to normal, but only after several generations. The vertical transfer of the high-Bacteroidetes microbiota composition continued for several generations and remained indefinitely as long as there was no exposure to the wild-type gut microbiota. In addition, these later generations also develop colitis-like symptoms similar to the original knockouts. Therefore, the colitis-causing activity of the gut microbiota can be transferred to progeny as well as to mice housed in the same environment. The severity of the colitis was reduced when the mice were treated with antibiotics, further suggesting that the Provatellaceae played an important role in this disease.

This paper has implications for research in inflammatory bowel disease. First, the authors have uncovered a possible mechanism that generates an inflammasome response when the gut microbiota is altered. Further, the mechanism of this response is becoming understood: it utilizes a known cytokine pathway. The transferable property of these inflammatory symptoms, through the transferred gut bacteria, is certainly surprising. The induction by these Bacteroidetes of the inflammatory response in mice without any genetic abnormality gives us a powerful insight into the etiology of inflammatory bowel diseases. It is perhaps surprising that the loss of NLRP6 results in the activation of an inflammatory cascade. The gut epithelium’s regulation of inflammatory responses is thus shown to be a balance between driving and inhibitory factors.

While clinical implications seem to lie on the horizon, using perhaps a mediation of inflammatory effects through downregulation of its cascade, perhaps the most interesting part of this paper is the microbiology. Through NLRP6 and other inflammasomes, the body is able to generate an inflammatory response to bacteria that it recognizes as “foreign.” This response is absent where the microbiota is normal in composition. The species in the altered microbiome are not pathogens in the classical sense, yet these results give us valuable insight into the regulation of “good” versus “bad” bacteria. This insight has further implications for the coevolution of vertebrates and their gut microbiota. Bacteria in the intestines are not merely parasites or even commensals; they are an integral part of our gastrointestinal tract and a disruption in their composition leads to dramatic changes in the body, in an effort to restore the “normal” state.

Micah is in the MD/PhD program at the University of California, San Diego and a student in the Integrative Microbiology graduate course.