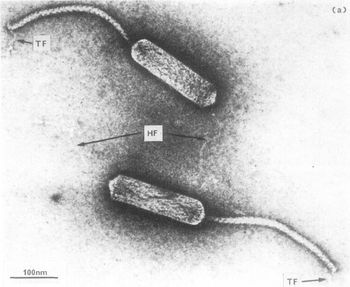 Something bizarre can be seen in TEMs of a Caulobacter crescentus phage, φCbK. This was first reported in a paper published back in 1972 (see the image to the right). In most respects, φCbK is your typical ho-hum siphovirus with an elongated head (60 nm diameter, 200 nm long) sporting a 290 nm long non-contractile tail with the usual tail fibers. But even with the limited imaging techniques available in 1972 these researchers could see that this phage has a single long filament protruding from the tip of its head! And there the story sat until the recent PNAS paper by Ricardo Guerrero-Ferreira and colleagues. These researchers took a close look and found that φCbK uses its head filament to make initial contact with its host, much as other phages use their long tail fibers. 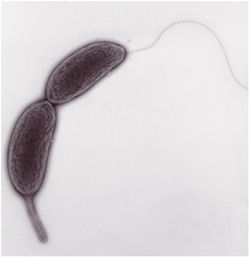 Before we go on, a few words about the cast of characters. C. crescentus is a Gram-negative α-proteobacterium well-known for its dimorphic life cycle. Replication-competent stalked cells give rise, via unequal cell division, to another stalked cell and a motile swarmer cell, the latter equipped with a single flagellum and multiple pili at the 'old' pole. After swimming around for about 30% of the overall cell cycle, the swarmer cell sheds its flagellum and pili, grows a stalk, and becomes a stalked cell—thus completing the cycle. 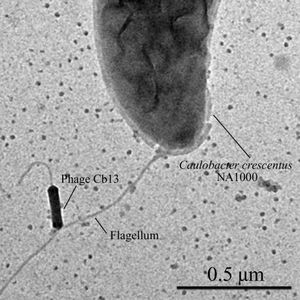 Legend: TEM of a φCb13 phage and a wild-type C. crescentus host. Notice the head-first orientation of the phage in contact with the flagellum. Uranyl acetate staining. Source.

C. crescentus is host for numerous phages, including φCbK and φCb13. Both are siphoviruses, both have a strong preference for swarmer cells—the stage that possesses both a flagellum and pili. 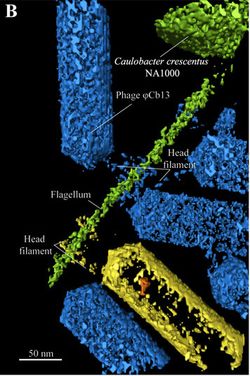 Legend: C. crescentus NA1000 cells infected by phage φCb13. Notice the head filaments that extend from the phage and wrap around the flagellum. Shown as full virions (blue), an empty capsid (yellow), bacterial cell and flagellum (green), and a dislodged phage tail-head connector inside the empty capsid (orange). Source.

Recently Guerrero-Ferreira and colleagues used cryo-electron tomography (cryo-ET) to take a look at C. crescentus cells 15 minutes after infection by either of these two phages. At that time the phages are localized along the flagella, each with their head filament wrapped around a flagellum.

Reminds me of the way coliphage Χ uses its kinky tail fiber to catch a host flagellum or the way Bacillus subtilis phage PBS wraps its three looped tail fibers around its host flagellum (see figure).

What’s going on here? These phages adsorb most efficiently to normal C. crescentus swarmer cells whose flagella are rapidly rotating, with the direction of rotation alternating periodically between clockwise (CW) and counter-clockwise (CCW). A CW-rotating flagellum pushes the cell forward ahead of it. During the periods of CCW rotation, the cell swims "backwards" with the flagellum in the lead. Phages don't adsorb as well to mutants that lack a flagellum, not to those that rotate their flagellum in only one direction or whose flagella don’t turn at all due to a defective basal body. Exclusively CW rotation is worse than only CCW. For all the mutants reported, adsorption is reduced only two- to three-fold and the phages are still able to form plaques on lawns of these mutant cells. 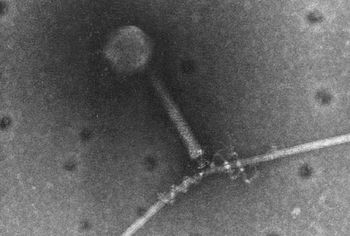 Legend: A PBS phage with its three tail fibers wrapped around a B. subtilis flagellum. Source.

This suggests that being able to attach initially to a flagellum makes adsorption more efficient, but some other cell component must serve as the essential receptor. Enter the pili. Swarmer cells form Type IV pili at the flagellar pole. Phages have even more difficulty adsorbing to mutants with normal flagella that lack pili. Tomographic reconstructions show that the phage uses its tail to then attach to the pilus portals (the channels formed to allow the pili to pass through the outer membrane) at the cell pole. 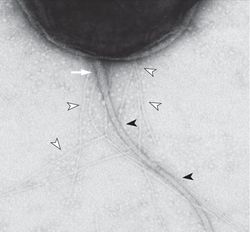 Putting this all together, the researchers proposed a model to explain how these head filaments help φCbK and φCb13 to infect C. crescentus. In the first step, the phage reversibly attaches by its head filament to the host's rotating flagellum. The filament wraps around the flagellum in such a way that CCW rotation moves the phage toward the cell pole, using a nut and bolt model described for coliphage Χ. But there is another bonus here.E. coli, with its bundle of flagella, can only swim forward or tumble. In contrast, C. crescentus with its single polar flagellum actually swims backwards during CCW rotation. As it does so, it drags the attached phage along by its head filament, and this swings the phage tail toward the cell pole. In this position the tail fibers can more easily locate and attach to the receptors at the pole (the pilus portals). In contrast, CW rotation is bad both ways: the rotation threads the phage toward the distal end of the flagellum, and as the cell swims forward, the phage tail is swept away from the receptors. 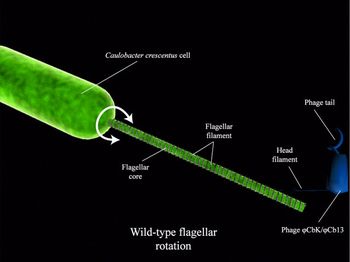 Legend: Bacterial cell and flagellar core are depicted in green and flagellar filaments are represented as a single spiral (in gray) wrapped around the core. Phage components are shown in blue. Source.

Might other phages use a head filament for efficient adsorption? Possibly, but several factors would have to come together for this strategy to be so useful: the host must have a single flagellum; the phage receptors must be located near the base of the flagellum; the 'threads' on the 'bolt' (the flagellum) must match those on the 'nut' (the head filament). Some other phages, such as the Bacillus subtilis phage φ29, do indeed have head fibers, and lots of them, but these fibers are only short protruding spikes formed by a minor capsid protein. In contrast these single head filaments look more like the long tail fibers found in some other phages, some of which are known to wrap around a host flagellum in a similar fashion. Did these C. crescentus phages develop something new, or simply co-opt the existing tail fiber proteins and assembly mechanism, but attach the fiber at the opposite vertex? I do hope some researchers will put their heads together soon and tell us more about these eccentric headfirst phages.