« Did van Leeuwenhoek Spend His Youth in France? | Main | Vital or Not Vital: That Is the Question » 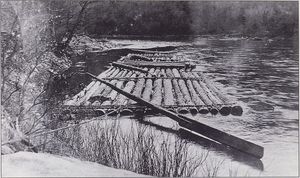 In the placid old days, cell membranes were assumed to be fairly simple affairs: lipid bilayers with some proteins floating in them like corks. This “fluid mosaic” arrangement took a beating around the 1970’s, when biophysicists suggested that membranes may be composed of microdomains, where certain lipids and proteins become segregated into what became known as lipid rafts. With further work, these turned out to be places where specific lipids such as steroids and sphingolipids concentrate. The size of the rafts is supposedly in the 10-200 nm range. Lipid rafts are said to be involved in signal transduction, protein trafficking, and more. Some viruses, e.g. influenza, are assembled at lipid rafts, and the rafts play a role in prion development and transmission. The subject is not without controversy but it has many adherents.

Lipid raft organization in eukaryotic cells. Region (1) is standard lipid bilayer, while region (2) is a lipid raft. (3) and (4) are membrane proteins. Source.

So let’s ask, do bacterial membranes have lipid rafts? That they are not wholly homogeneous has been suspected for some time. Many proteins are localized at particular sites along the membrane, suggesting that specialized microdomains may be a feature of bacterial membranes as well. A recent paper by López and Kolter opens the door to such a possibility. It was known that bacteria possessproteins homologous to some involved in the lipid rafts of eukaryotic cells. One of them, FloT of B. subtilis, is related to Flotillin-1 (also known as Reggie, funny enough), a protein involved in eukaryotic vesicle trafficking and cytoskeleton rearrangement. FloT is distributed heterogeneously in the membrane and a fusion with yellow fluorescent protein can be seen under the microscope as dots along the whole cell. (See here and here.) Mutants lacking this protein are slow in growth and inefficient in sporulating. Bacteria also encode other proteins in the Flotillin family.

Now, what evidence is there for bacterial lipid rafts? In eukaryotic cells, membranes can be divided into detergent-resistant (DRM) and detergent-sensitive (DSM) fractions. Although the DRM fraction may not be the same thing as lipid rafts, it does include proteins thought to be present in rafts. Sure enough, when B. subtilis membranes were treated with detergent, FloT was found in the DRM fraction. Incidentally, other proteins found in this fraction are involved in signaling, molecule trafficking, and protein secretion. Food for thought.

The authors came by the bacterial lipid rafts idea in a roundabout but interesting way, having to do with the effects of the sporulation-related histidine kinase KinC on biofilm formation. They found that KinC activity depended on a protein predicted to synthesize squalene, a precursor in the synthesis of sterol and carotenoid lipids. And, as per their expectation, KinC was also found in the DRM fraction. Under the microscope, FloT-YFP fusion was located to about six foci along the cytoplasmic membrane, and was observed to move rapidly. Sure enough, KinC, known previously to localize in foci, co-localizes with FloT. And another protein, YqfA, that by bioinformatics appears to have a characteristic flotillin domain, does too. Does this mean that FloT and YqfA might have some effect on KinC function? Indeed, a double mutant lacking both FlotT and YqfA shows decreased KinC activity.

Since other bacteria have flotillin-like proteins, the authors asked if their findings were relevant to Staphylococcus aureus and Escherichia coli. In staph, a fluorescent protein fused to the flotillin homolog was located in a single focus (one raft per cell?), but in E. coli there were more. Some of the proteins found in the DRM fraction are involved in biofilm formation. What may one speculate about the function of lipid rafts in bacteria? Lopez and Kolter presume that the compartmentalization of specific proteins in tightly packed membrane areas might facilitate their activity. Sounds right.

Now, a bit of nostalgia. A long time ago, in 1972 (prehistoric times), a graduate student, Betsy Green, and I published a paper purporting to show that the bacterial membrane is divisible into some 250 bits. How did we arrive at such an impudent conclusion? Betsy grew several species of bacteria in tritium-labeled glycerol, a specific precursor of lipids, then “chased” the label by growing the cultures in unlabeled media. Many generations later, all the label was still retained in phospholipids. At intervals she took samples for radioautography, which allowed her to estimate the percent of cells that were still labeled. 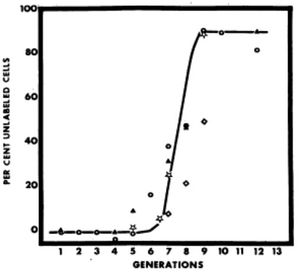 Cells were grown for several generations in the presence of tritiated glycerol, then filtered and grown in media without the label. Samples taken at different times were analyzed by radioautography. The graph shows the proportion of unlabeled cells, that is, cells with no photographic grain around them. Open circles: E. coli grown in broth. Open stars: Bacillus megaterium grown in rich broth. Open diamonds: E. coli grown in minimal medium. Note that all cultures behaved similarly. Source.

Hard on the eyes, all that microscopic counting of grains of photographic emulsion. But count she did, and found that all the cells were labeled until some eight generations had passed. Thereafter, the proportion of labeled cells diminished by a factor of two at each subsequent doubling. The interpretation we favored was that the E. coli membrane consists of 250 “units of conservation” that retained their physical integrity upon cell growth. Each would average some 4 × 104 nm2. We had no idea what this meant in terms of the chemical individuality of each such membrane subunit. One more reminiscence: this paper made absolutely no impact, probably because it was premature and had no heuristic value at the time. It was never quoted, to my knowledge, despite the fact that it appeared in a high profile journal (PNAS). So it goes. At least Betsy got her Ph.D.

Now, does this piece of paleomicrobiology have anything to do with the Lopez and Kolter result? At first, this does not seem to be the case because our bits of membrane are much smaller than those now reported. However, that may not be the telling part of the story. Who knows, maybe the newly found rafts retain their integrity over generations, which is something that could be determined.