« How We Tell The Good Bacteria From The Bad | Main | Viruses that Infect Parasites that Infect Us: The Matryoshka Dolls of Human Pathogens »

Taking Bugs Out For a Spin

by Linh Truong and Shabana Din 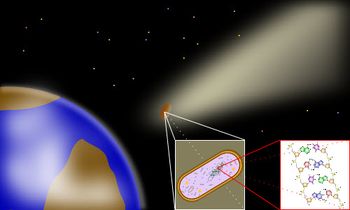 How life may have arrived from elsewhere. Source

Microbes are the most robust of all life forms inhabiting our planet. Their ability to proliferate in extreme temperatures, pH, pressure, and radiation is well documented. They not only withstand but grow at physical extremes, which makes us wonder about the physical bounds for life not only on our planet, but on others as well.

This has nourished an interest in prokaryotic life in extraterrestrial environments. However, for this to be a possibility, microbes may need to withstand moderate to very high gravitational forces and be able to proliferate in gravitational extremes. This requirement follows from at least two scenarios. One is that life forms undertaking interplanetary travel (Panspermia?) as the result of the impact of an asteroid would be ejected from the donor’s surface at very high g forces (possibly 300,000 g). The second is that if life were to exist in certain massive celestial objects such as the relatively cool brown dwarfs, it may be exposed to high gravitational forces, perhaps up to 100 g.

Research groups worldwide have already begun probing the restraints on bacterial viability resulting from a range of gravitational accelerations greater than those found on earth. Previous studies had already shown that prokaryotes can survive forces of 100 g. A recent report by Shigeru et al. takes these findings some four orders of magnitude further. They found that microorganisms not only survive under gravitational conditions of 105 g for up to 48 hours, but they can also grow.

These researchers worked with four bacteria and one yeast, determining their growth rates while subjecting them to a centrifugal force of 403,627 g. Most of these organisms grew as well at 7500 x g as at 1 g. At higher g forces, starting around 2 x 104 g, growth slowed down, in some cases more than in others. Some cultures also showed a prolonged lag period. Even if slowly, all these microbes were able to proliferate at the high gravitational forces used here. Furthermore, the applied hypergravity did not cause mechanical deformation of these microbial cells.

Shigeru et al. go on to speculate about the causes of the observed growth defects. While the samples are being spun in an ultracentrifuge, the microbial cells are forced into dense pellets at the very bottom of the centrifuge tubes, which could affect the diffusion of nutrients to the cells in the center of the pellet. Eukaryotic microbes, being bigger, can be expected to be more affected than bacteria. In general, hypergravity induced by centrifugation has its own environmental quirks. Hydrostatic pressure is greatly increased and, as we said, cells may be deformed by hypergravity. Furthermore, centrifugation causes large proteins or other macromolecules to fall to the bottom of the centrifuge tubes, which forces such food to come into contact with the microbial pellet. This may provide a nutritional advantage.

So why is this important? Microbes grow everywhere on Earth, including within environments that had not been expected to support life. This has caused us to re-evaluate our notions of the possibility of extraterrestrial life forms. The results presented here show that life can tolerate greater extremes of gravitational force than previously imagined. This would seem toexclude the possibility that gravity may have a deleterious impact in the colonization of extraterrestrial environments.It now seems possible that life could survive the rigors of space travel between planets in our solar system or between other planetary bodies.

Linh and Shabana are students in the Integrative Microbiology graduate course at the University of California, San Diego.