« Taking Bugs Out For a Spin | Main | Did van Leeuwenhoek Spend His Youth in France? » 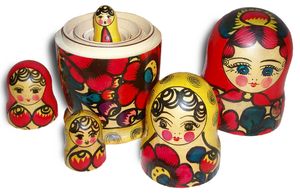 We’re all too familiar with the viruses that can infect us, from the common cold to yellow fever virus to the endogenous retroviruses that make up a chunk of our genome. Many of us are also acquainted with parasites, such as tape worms or Giardia, that like to set up camp in the human body. But the world of parasites and viruses does not end there. Many parasites or endosymbionts can be infected with viruses. A classic example is Paramecium, which can harbor an endosymbiotic bacterium, Caedibacter, which in turn carries phages involved in making a toxin. But from the human point of view, things start to get particularly interesting when we consider the viruses that infect parasites of humans and how those viral infections — inside of a parasite inside of a person, somewhat like a Matryoshka nesting doll — may modulate the parasite’s interaction with its human host. Several protozoan parasites, including Leishmania and Trichomonas, are in turn parasitized by viruses, namely leishmania RNA virus-1 (LRV-1) and Trichomonasviruses, respectively. A commonality among such viruses is that they all have dsRNA genomes. It remains to be seen whether they also share the practice of exacerbating parasitic infection of the host as was recently reported for LRV-1 infection of Leishmania guyanensis. 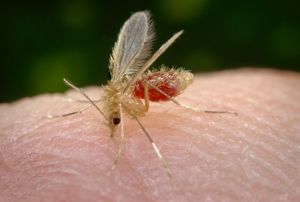 A Phlebotomus papatasi sandfly in the process of ingesting its bloodmeal, which is visible through its distended transparent abdomen. Sandflies such as this P. papatasi are vectors for the spread of L. guyanensis. Source

L. guyanensis is transmitted by a sandfly vector and, once passed on to the human host, preferentially infects macrophages, localizing to the phagolysosome within these cells. Infection by L. guyanensis may cause either cutaneous leishmaniasis (CL), which exhibits as lesions on the skin, or mucocutaneous leishmaniasis (MCL), a more serious condition that damages much of the nasopharyngeal cavity, sometimes even destroying the nose of infected individuals. Since MCL develops in 5-10% of infections with L. guyanensis, figuring out what causes this severe condition is of obvious interest.

There have been some investigations into what might predispose a patient to develop one condition or the other but these studies may not provide a complete answer. MCL clinical isolates consistently cause MCL in hamsters suggesting something is happening on the Leishmania side too. One of the major differences between CL and MCL is that a lot more inflammation is involved in MCL. A recent Science paper by Ives et al. reports that infection of L. guyanensis by LRV-1 may play a role in increasing the inflammatory signals produced by infected macrophages. The evidence? LRV-1 RNA was consistently detected in MCL isolates and in L. guyanensis strains that were termed metastatic because they consistently cause MCL in hamsters. In CL isolates and in non-metastatic parasites, viral RNA was not detected, or was present at much lower levels. Furthermore, the expression level of proinflammatory genes for the cytokines CCL5, CXCL10, and IL-6 was greater in macrophages infected with L. guyanensis containing higher levels of LRV-1. Likewise, the level of these proteins was much higher during infections with MCL isolates than with CL isolates. In both situations, the increase in inflammatory mediators depended on the expression of Toll-like receptor 3 (TLR3). 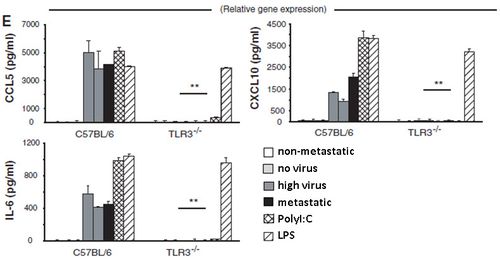 Cytokine abundance was quantified after 6 hours of infection of macrophages from wild-type C57BL/6 mice and TLR3–/– mice, with virus-infected, virus-free, metastatic, or non-metastatic parasites. PolyI:C is a control for TLR3-dependent stimulation, whereas LPS is a control for TLR3-independent stimulation. Data reflect mean ± SD of protein secretion relative to unstimulated controls (n = 2). Source (with modified legend).

The authors make the assertion — and quite a reasonable one — that while L. guyanensis is residing within the phagolysosome, free viral dsRNA may stimulate signaling through TLR3, a receptor located in endosomes. Signaling through the TLR-3 pathway activates NF-κB which then promotes expression of type I interferons, leading to expression of many inflammatory genes. Unlike your typical virus that produces extracellular infectious virions, LRV-1 remains within the leishmanias, relying on transmission to daughter cells during cell division. Thus any free viral RNA in the phagolysosome would have been released from dead parasites. Therefore it seems that the inflammation caused by LRV-1 may not be advantageous to L. guyanensis per se, even though it does cause more severe pathology. Rather it may in fact be an unfortunate side-effect of a macrophage successfully dealing with the parasites that infect it. To date, this paper is the only known instance where viral infection of a protozoan parasite modulates its interactions with its host. The search is on to find others. 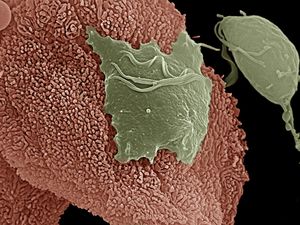 An electron micrograph of Trichomonas vaginalis adhering to vaginal epithelial cells collected from vaginal swabs. A non-adhered parasite (right) is pear-shaped, whereas the attached one is flat and amoeboid. Source

Trichomonas vaginalis is a common, sexually transmitted parasite that causes vaginitis, has been implicated in premature births, and may also be associated with development of prostate and cervical cancers. While T. vaginalis doesn’t have a bifurcated presentation like L. guyanensis’MCL and CL, it does share L. guyanensis’ penchant for viral infection. In fact, it seems that one virus is not enough for T. vaginalis, with some clinical samples containing representatives of each of the four species of trichomonasviruses (TVVs) and one isolated cell harboring three different viruses. The effect that these viral infections have on the pathogenicity of T. vaginalis has not yet been determined. However, something is known about the effect of the virus upon the parasite itself and this may provide clues regarding potential ramifications for trichomoniasis. First, TVVs alter expression of P270, an immunogenic surface protein in T. vaginalis. Additionally, TVV infection modulates expression of cysteine proteases, which are known T. vaginalis virulence factors. Since T. vaginalis is an extracellular parasite, it would not interact with TLRs in the phagolysosome like Leishmania does. However, it may encounter these sensors, for example, upon being engulfed by a macrophage, in which case stimulation by TVV dsRNA might increase inflammation. This potential for exacerbated inflammation, along with TVV’s modulation of proteins important for immunogenicity and virulence, make it seem less a question of whether TVV infection affects the course of trichomoniasis, and more likely a question of how.

Leishmania and Trichomonas obviously do not represent an exhaustive list of microbial parasites infected by viruses. Giardia lamblia is home to giardiaviruses and Entamoeba histolytica seem to be harboring a few of their own. Nor is this notion of a virus inside of a parasite inside of a person the sole example of biological matryoshka dolls. Neorickettsia sennetsu takes nesting to a new level. It infects a trematode which then infects a fish, which when eaten can transmit both the trematode and the neorickettsia to whichever hungry person didn’t take the time to cook their fish before eating it.

Much remains to be known about how these two particular viruses affect human health, while many viruses within parasites — and perhaps even within viruses themselves — are likely yet to be identified. We may come to realize that many parasitic clinical conditions are like onions: they have layers. 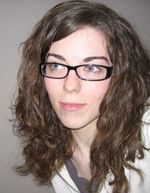 Jamie is a student in the Ph.D. program in Virology at Harvard University. She studies NK cells in SIV infection.