Vital or Not Vital: That Is the Question 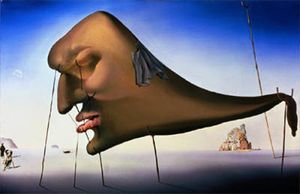 Sleep, by Salvador Dali. Source. ‘Dali's painting of Sleep is successful in its suggestion of the precarious balance of sleep. We realize that if a single crutch were to fall, the dreamer will awake.’ Source.

If you are as a stubborn as I am, you probably just cannot let go of things easily. That is exactly what happened with me a few months ago when I sent a paper for peer-review that included results obtained using a commercial ‘vitality’ assay. The kit uses a fluorogenic redox dye that fluoresces when modified by bacterial reductases. Since the respiratory chain of the cell envelope contributes most of the cell's reductase activity, by measuring the respiratory activity this kit also, indirectly, assesses cell envelope integrity. When I got the reviews back, one reviewer asked what ‘vitality’ meant. I was sure that this would be an easy comment to address. However, I started to have a change of heart when I could not find any definition of vitality in any microbiology textbook at my disposal. A PubMed search retrieved mostly references to human vitality (or physical activity) and general aspects of bacterial viability.

I could have caved in and replaced the word ‘vitality’ with ‘viability.’ That would have been easier. After all, vital functions of the cell such as the respiratory activity of the cell envelope determine whether a cell is viable or not. However, in my mind, viability was a quality of the cell reflecting its potential to grow, while vitality referred to the measurable activities that make a cell viable. But what are the vital functions that make a cell viable? Out of desperation, I Googled the word ‘vitality’. All I could see as remotely related to my search was the Merriam-Webster definition of vitality. It is there where I opened Pandora’s box.... These are the three definitions that I found to be most applicable to microorganisms:

Let’s start with the second definition, as this is perhaps the one that best describes the mainstream view of vitality among microbiologists. Vitality is often associated with viability, and viability with growth. We rely on laboratory culturability as an indicator of a living cell, under the assumption that any cell that replicates and grows to detectable levels (i.e., makes colonies on plates or increases the turbidity in a liquid culture) is alive. We confuse plating efficiency with viability and, to this day, we teach our students that they can quantify viable cells as colony forming units (CFUs). We still look at the stationary phase of growth as the phase of near or actual cell death, despite the active population dynamics that characterize stationary phase physiology. And we have the audacity to refer to organisms not available in pure culture as ‘unculturable.’ This is clearly not the right definition of microbial vitality unless we learn to differentiate between viability and culturability.

This brings me to the first definition: the peculiarity distinguishing the living from the nonliving. Microorganisms need substrates to grow, but cells can be alive without manifesting growth and division. A recent study that used the same redox fluorogenic dye that we used to measure respiratory activity in our experiments demonstrated that starved cells of methylotrophs lack detectable respiratory activity, yet they could resume active growth upon addition of a carbon source. In fact, many microorganisms can persist in metabolically inactive or dormant states under conditions that are unfavorable for growth. Although the metabolic activity of dormant cells may be undetectable under laboratory conditions, the cells keep sensing and responding to environmental cues that can herald better times. Thus, these cells must be maintaining some vital (!) activity even if we can’t detect it. In many cases, dormancy does not involve dramatic morphological changes such as those seen during the formation of spores or of dormant bodies by some intracellular pathogens. This makes it challenging to identify the ‘peculiarity’ that distinguishes the living from the dead in microorganisms. 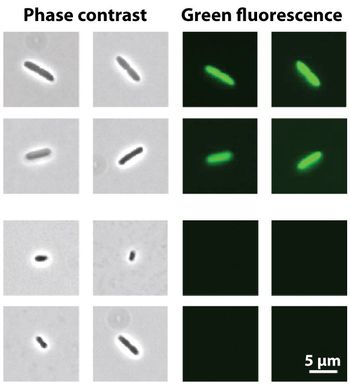 Sorting of persister cells from exponentially-grown cultures of E. coli using a strain that expresses a degradable GFP under the control of a ribosomal promoter. The green population of larger cells are regular cells; the subpopulation of small, dim cells are antibiotic-tolerant persister cells with reduced translation. Source.

Dormant variants highly tolerant of multiple antibiotics (aka persister cells) are also common in growing exponential cultures of all pathogens examined thus far. In fact, they have been linked to the persistence or recurrence of biofilm infections. The formation of persistent cells appears to be controlled by stochastic and, to a lesser extent, deterministic mechanisms but the result is always growth arrest that renders the targets of antibiotics, such as translation or cell wall synthesis, inactive.

An interesting and still controversial example of a dormant-like physiology is the viable but nonculturable state (VBNC). The VBNC hypothesis proposes that some culturable bacteria, including many pathogens, can enter a semi-dormant state, often in response to prolonged conditions of stress. These VBNC cells lack culturability, yet maintain some low metabolic activity and can ‘resuscitate’ under specific conditions. I like the word ‘resuscitate’ in this context because it implies reviving something from an ‘apparent’ state of death. Semantics aside, the VBNC state is just one more example of how little we know about what makes a bacterial cell alive and potentially viable under laboratory conditions.

In the end, vitality definition 3 above appears to be the most adequate: the power of enduring. What that ‘power’ means for microorganisms may be unclear. Note that dormant or semi-dormant physiologies are an ideal model system to investigate the vital functions and minimal activity levels that allow a cell to remain viable. Yet, we know little about the mechanisms that enable microorganisms to tour through these cryptic physiological states. One may expect that essential cellular functions such as respiration and membrane potential are functioning at some low, basal level even in dormant cells. They may be the best markers to assess the levels of vitality, and, therefore, the potential for growth and survival. However, we lack sensitive methods to detect such essential activities at the low levels that likely operate in dormant cells.

Since these considerations were too lengthy for my paper’s rebuttal, I opted for defining vitality as how alive a cell is as measured by the levels of the vital respiratory activities of the cell envelope. One reviewer was not satisfied with this explanation but the other reviewers and the editor were. I learned two things from this review process: (i) I am not the only stubborn scientist, and (ii) stubbornness is the ‘vital’ function that allows scientists to unravel the many mysteries that microorganisms still keep for us.

Note added post-publication: Shortly after I shared with you my tribulations with vitality and viability (above), a little bird (tweet-tweet-ELIO, tweet-tweet-ELIO) sent me this fantastic mini-review by Hazel M. Davey that addresses the controversial subject of viability. The title, Life, death, and in-between: meanings and methods in microbiology, is quite explicit. Here you can find a great deal of information about what we think may be the 'in-between' cellular activities (and potential biomarkers for vitality) that separate the living from the dead and the methods that are currently available to measure them. The activities are enumerated in order following what the author calls 'the route from life to death'. I especially loved how the route mentions an unknown point of 'no return.' Beautiful read!