« Fine Reading: Microbial Genomics and Infectious Diseases | Main | How to Improve Vaccines (or Not), 1912 Style »

And We Thought We Knew What CRISPRs Do!

…these findings lead us to assert that each CRISPR region should not be assumed to have a role in resistance to phage infection until such a conclusion is experimentally validated. (Source.) 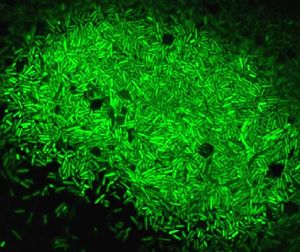 Imagine that you have been growing Pseudomonas aeruginosa strain PA14 in your lab for some time, studying biofilm formation among other things. A student in your lab isolates a phage, dubbed DMS3, that mediates generalized transduction between this and other P. aeruginosa strains. Oddly, this strain, when lysogenized by DMS3, no longer forms biofilms or swarms, both group behaviors. Odd indeed. This is what actually happened in the O'Toole lab at Dartmouth, and this ocurrence led these researchers to the discovery of a new function for CRISPRs. (For an introduction to CRISPRs, see our two earlier posts here and here. For a recent commentary on several papers from the O'Toole lab, see here.)

First they asked whether this inhibition might be a quirk of this particular P. aeruginosa strain. They rounded up 86 different strains. Of the 86, 83 neither swarmed nor made biofilms when lysogenized by this particular phage. The three exceptions, though, were evidence that lysogeny itself isn't the cause. Furthermore, phages harvested from those three strains were quite capable of inhibiting biofilms in wild-type hosts. Ergo, something was different about those three lysogenized strains.

P. aeruginosa phage DMS3. This useful temperate phage, isolated from a clinical strain of P. aeruginosa by an undergraduate student, mediates generalized transduction within and between P. aeruginosa strains PA14 and PAO1. Source.

This, however, did not rule out the possibility that there was a single gene in the host genome that was interacting in some other way with the prophage. To look for such a gene, they transposon mutagenized an inhibited strain and then screened some 5000 mutants that had lost that inhibition. They struck gold with one mutant that mapped to an interesting region that includes six ORFs similar to known CRISPR-associated genes (cas genes) and that is flanked by two CRISPR arrays. Another observation also implicated CRISPRs: those three strains that did not show biofilm inhibition when lysogenized (see above) lacked CRISPRs.

That CRISPRs seem to be involved here is surprising. The accepted function for CRISPRs is that they defend against incoming phage and plasmid DNA. The targeting mechanism requires a perfect sequence match between a CRISPR spacer and a region in the invading DNA. But, before going into that, I first need to mention that all CRISPR systems are not the same. So far, eight distinct CRISPR subtypes are known, typically named for the organism where first described but apt to be found in many other species courtesy of horizontal gene transfer. To qualify as a different subtype, a CRISPR must have its own distinctive repeat sequence and must have at least two cas genes that are not found in any other subtype. The CRISPRs in this P. aeruginosa strain are the Yersinia subtype; their cas repertoire includes two genes shared with other subtypes (cas1 and cas3) plus four Yersinia-specific genes. Yersinia CRISPRs were found in 40 of 122 clinical isolates of P. aeruginosa. It turns out that Yersinia CRISPRs are not your typical anti-phage CRISPRs.

The CRISPR region of P. aeruginosa PA14, including the two CRISPR arrays (green) and the CRISPR-associated (cas) genes (red). The PA14 gene designation is listed above each cas gene, its Yersinia designation beneath the gene. Details of both the CRISPR-1 and CRISPR-2 arrays are also shown. Here black boxes indicate repeats, while gray boxes indicate spacers containing identical or partial nucleotide sequence matches with the indicated phages. Spacer numbers are listed above each spacer with known sequence identity to a phage, as well as the last spacer in the array. Modified from this source.

Combined, the CRISPRs in those 40 P. aeruginosa isolates had 132 unique spacers that were identical to known viral sequences. Strikingly, all of them matched temperate phages or prophages. Still more spacers matched pathogenicity islands or transposons. None matched lytic phages or plasmids—the presumed targets for CRISPRs. This suggests that Yersinia subtype CRISPRs interact only with chromosomally integrated mobile elements, that they play no part in defending against incoming phages or plasmids. Want more direct evidence? The researchers selected seven strains that had CRISPR sequences identical to known phages and deleted the entire CRISPR region from each. Having a CRISPR did not affect the rate of infection or lysogenization by the matching phages. So much for anti-phage defense by this CRISPR subtype. It is not that these CRISPRs are nonfunctional. Their spacer arrays are transcribed and precisely processed to yield the small CRISPR RNAs (crRNAs) that have been shown in other cases to be the active defenders.

So these CRISPRs must be doing something else, and that something else appears to impact the group behaviors of biofilm formation and swarming. Perhaps this ought not surprise us. Now that more and more different cas genes have been identified in different Bacteria and Archaea, it is striking that only one, cas1, is present in all CRISPR subtypes. Cas1 encodes an integrase that is involved in the acquisition of new spacers—a function essential to have any sort of a CRISPR at all. That the rest of the cas genes vary suggests that spacers, once acquired, may be used for different purposes by different organisms. That seems to be the case here. Biofilm inhibition is the work of the five other cas genes present; the integrase cas1 is not required.

Now for some details about these CRISPRs, the prophage, and biofilm inhibition. There are two CRISPR arrays in P. aeruginosa PA14, but we can ignore CRISPR-1. It has no spacer sequences that match phage DMS3 and deletion of its spacer array doesn't affect inhibition. CRISPR-2, on the other hand, is required for biofilm inhibition. It has two spacers that match sequences in DMS3, one a perfect match and one a partial match. When they tested CRISPR-2 constructs with various spacers replaced, they found that only one spacer—the spacer with partial identity to DMS3 gene 42—was required for biofilm inhibition. They showed that the identity between spacer and gene is essential here by changing a single nucleotide in the spacer. That abolished the inhibition until they made the same change in the prophage gene. Although gene 42 is required for inhibition, its protein product is not. It's not known what gene 42 does for the phage, but without it the phage produces no progeny.

Although many questions remain, at this point it appears that this Yersinia subtype CRISPR has no role in defense against phages or plasmids, but instead interacts with a gene in an integrated prophage, thereby altering host phenotype. Thus we have a new mechanism of lysogenic conversion. A second novel twist: the highly specific interaction between the spacer and gene 42 that leads to biofilm inhibition is sequence dependent, but, unlike what is seen in anti-phage defense, does not require 100% identity between spacer and target.

All of this discussion as to the how of this biofilm inhibition in the DMS3 lysogens has left the question of why unaddressed. What might be the benefit for either host or prophage? In one of their papers, these researchers speculated: CRISPR-mediated alteration of biofilm formation and swarming may be a strategy of the bacterium for limiting the effects of bacteriophage dissemination in bacterial communities. In other words, phage-infected bacteria quarantine themselves from biofilms and other group behaviors to reduce the chances of infecting the larger community. Alternatively, inhibition of biofilm formation and swarming may provide an unknown survival advantage to phage DMS3. No matter who benefits, we are reminded yet again that the interactions of phages with their hosts are more varied and more collaborative than a simple predator-prey relationship would suggest.