This is the fourth annual Week of the Fungi on STC, a sporadic undertaking. It is our way to hail the start of the fall mushroom collecting season in parts of our home territory (the northern hemisphere).

Although I was a tomboy as a child, I never had the stomach for spitting competitions. But that changed recently when I read an article by Nik Money and collaborators about spitting competitions among fungi. Yes, you heard me right. Some fungi spit, and they do so with amazing precision and speed. It has been long known that some fungi in the Ascomycota and Zygomycota use squirt gun mechanisms to launch their spores. But the speeds and distances that some of them can achieve have only recently been measured with precision, thanks to high speed video capture microscopy.

One group of fungi, the so-called coprophilous (which literally means 'dung-loving'), have mastered this technique and can launch spores at speeds of 4-21 meters per second! The gold medal in acceleration goes to Ascobolus immersus, which sets the record at 1,800,000 m s–2. Such acceleration, the authors note, is the fastest recorded flight in nature. To put this number in context, a bullet leaving the muzzle of a rifle barrel approximately 0.9 m long at a speed of 600 m s–1 will reach an acceleration of 200,000 m s–2. The record holder for distance is Pilobolus kleinii. This fungus makes some sexy-looking fruiting bodies to propagate its spores and spits like a baseball player. Not surprisingly, it already caught the attention of Elio in two earlier postings (click here and here). Their sporangia (aka individual spores wrapped in a protective enclosure) can land as far as 2.5 meters away from the tip of the sporangiophore (aka the fungal squirt gun). Now, keep in mind that the Pilobolus fruiting body is not even a twentieth of an inch tall! 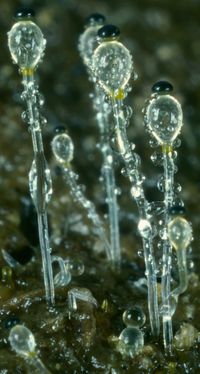 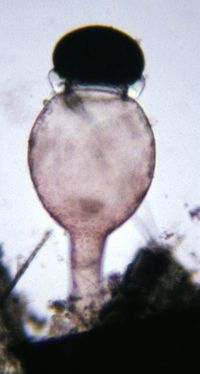 P. kleinni ‘dining’ on horse dung. The pictures show different magnifications of the bulbous stalk or sporangiophore filled with the fluid that holds and later squirts the spore-filled sporangium (black structure on top). The cap of the sporangiophore, which ruptures to launch the sporangium, can be seen in more detail in the picture at right. Credit: Malcolm Storey. Source.

To achieve this distance, the sporangiophore accumulates fluid rich in sugars and ions, which increases the osmolyte concentration and builds turgor pressure inside the bulbous vesicle of the sporangiophore. Ions, for example, account for as much as 95% of the total osmolality of the sporangiophore fluid in P. kleinii and help pressurize the fluid to approximately 0.55 MPa. This pressure is not high by biological standards; positive turgor is necessary for all cells to grow and divide. Nor is it high enough to require the fungus to make a specialized cell wall to contain the pressurized fluid. For example, cells of the Gram-positive Bacillus subtilis have internal turgor pressures between 1 and 1.9 MPa during the exponential phase of growth. Yet this relatively low turgor pressure within the sporangiophore of P. kleinii is sufficient to power the explosive discharge of its fluid contents and shoot the spore farther than any other coprophilous fungus examined. What makes this mechanism so exquisite is that the rupture of the sporangiophore occurs at a precise location under the sporangium and so rapidly that the energy of the pressurized fluid is almost instantaneously released to launch the spore. This video speaks for itself. The upshot is that these are savvy organisms that have perfected their mechanism of spore propagation to minimize the energy expenditure but maximize efficacy.

Why do they spit, you may ask. They do it to disperse to new sites. These fungi have specialized to grow within the dung of herbivore animals, feeding on the abundant organic matter. Studies suggest that competition for the available nutrients is fierce in this environment. Each fungal type has a unique set of enzymes that allows it to efficiently degrade and metabolize a subset of nutrients. As a result, nutritional cues control a precise succession pattern that typically begins with the metabolism of simple sugars by zygomycetes and is followed by the degradation of complex carbohydrates such as cellulose and xylan by ascomycetes. At the end, when there is lignin and little more left to degrade, enter the basidiomycetes. As the preferred nutrients run out, coprophilous fungi build their fruiting bodies towards the light above. Pilobolus uses a complex sensory transduction system for photoreception that enables the sporangiophore to grow towards blue light and then shoot the sporangium towards the sun. 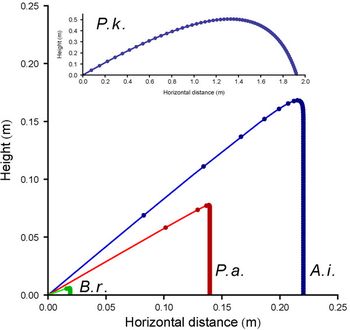 A great blog posting by Bora Zivkovic (aka Coturnix) describes this extraordinary form of phototropism and the circadian rhythms that may enable Pilobolus to respond to the intensity and duration of the light period. This phototropic orientation positions the fruiting body in the direction of the sun when it is at a determined angle above the horizon in the morning. As a result, the spores are not only released at great speed but follow precise, predictable trajectories. The trajectory of the sporangium of P. kleinii follows a 30° angle, whereas other fungi have different trajectories at various angles. This mechanism propels the spores far away from the dung to maximize their chances of landing on vegetation. As the spores are still wet with the sugary fluid, they stick well to the vegetation and stay there until an animal eats them. That the spores are launched in the morning also increases the chances that an animal will feed on them soon. Once ingested, they pass through the animal’s digestive system and exit within fresh, nutritious feces, ready to germinate and initiate a new spitting competition. Beat that, my childhood friends!