Going Next Door Without Getting Your Feet Wet 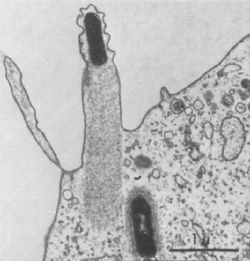 Thin section of a Listeria-infected macro phage. A single Listeria is located at the tip of a projection from the macrophage cell surface and behind it a long filamentous tail composed of actin fibers. Source.

Intracellular life has its perks. Inside host cells, bacteria are protected from neutrophils, complement, antibodies, some antibiotics, and the other unpleasant things floating around in tissue fluids. In addition, here they have access to ample food. But there is a catch, namely how to infect other cells and other hosts.

Intracellular life has ancient and distinguished origins. When unicellular eukaryotes first arose, not only did they arise because someone (whoever it was) ingested a prokaryotic cell, but soon thereafter the emerging protists must have learned to go after the abundant food microbial around them. The prey, in turn learned to cope with this and to survive inside the predator cells, something some bacteria do successfully to this very day. Consider how these overcome the destructive forces of phagocytes and other cells. The repertoire of ways they do it is impressive indeed. Of course, not all bacteria live intracellularly, but all viruses must do so at some stage, so this subject is old hat to virologists. 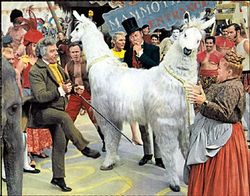 For both bacteria and viruses, the intracellular lifestyle presents a problem. How do they infect their next host? How do they escape from their “prison cell"? One way out is to lyse the cell, but this exposes them to the vicissitudes of extracellular life. A safer tactic is to move directly to an adjacent cell. Listeria, Shigella, and Rickettsia do just that, and in an ingenious way, by borrowing some of the actin from their eukaryotic host cell. The bacterium uses an actin-binding protein, ActA, to polymerize the actin so as to form a comet tail extending outwards from one bacterial pole. Why not at both poles? This would lead to the dilemma of Dr. Doolittle’s two headed llama, with not much in the way of directional movement. The two poles of the bacterium are not the same. ActA is present at higher concentration near the old pole— the one present in the mother cell—so that pole has first dibs in binding actin. The bacteria are impelled forwards by the polymerization of actin fibers behind them. The only thing that the bacterium needs to make this happen is its localized ActA. If you coat small polystyrene beads with ActA and place them in an actin-rich cell extract and supply ATP, they move quite well. Fun can be had by watching movies from Julie Theriot’s lab (click here and don’t miss the “Prime Time Entertainment” section). Interestingly, vaccinia viruses also use this kind of motility. 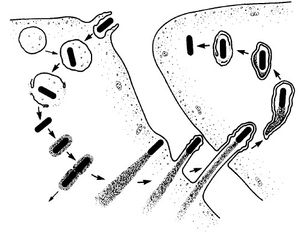 The intracellular life cycle of Listeria. The bacteria enter the host cell and are contained within vacuoles where they secrete a pore-forming protein, listeriolysin O (LLO), allowing bacterial escape and entry into the cytosol where they can grow and replicate. Here, the bacteria use host actin to move and propel themselves into neighboring cells. Figure from Tilney and Portnoy. Source.

Sooner or later, bacteria that move inside a cell, such as Listeria, will run up against the cell membrane. Somehow, this induces the formation of host cell protrusions—long filaments that are phagocytosed and taken up by the adjacent cell. A bacterium positioned at the tip of this structure is now in a good position to invade this adjacent cell. To do this, it must traverse the membrane of its original home cell, then pass through that of the phagosome inside the new cell. But keep in mind that Listeria are good at crossing membranes, using a pore-forming protein called listeriolysin.This story was elucidated in 1989 by Tilney and Portnoy.

Exciting though this may be, this mechanism must now share the glory with a recently discovered mechanism for intercellular travel. First, something about the organism involved. It is Burkholderia thailandensis, a relative of the-relatively-better known B. pseudomallei, the agent of melioidosis (a serious and sometimes lethal human disease) and of B. mallei, (the agent of the equine disease glanders). One reason for working with B. thailandensis is that the other two are considered possible bioterrorism agents and therefore require high level biosafety containment (BL3). B. thailandensis is less virulent and can be manipulated using fewer precautions (BL2). The researchers, led by Jeff F. Miller at UCLA, discovered a new mechanism by which these intracellular bacteria transfer to new cells. Motility in this case is due to the action of flagella (although these organisms also have the actin-based mechanism). I believe this may be the first time that flagellar motion has been described for a bacterium inside a host cell, but I could be wrong. In any case, this is an effective way of moving about, comparable to the traditional actin system. Model of the intracellular life cycle of Burkholderia. Invasins, which have yet to be identified, facilitate actin- dependent internalization into a primary endosome. The activity of T3SSBsa is required for escape from the endosome and entry into the cytoplasm. Either one of two independent motility systems, flagellar (Fla2) or actin based (BimA), is required for efficient cell–cell spread. T6SS-1 facilitates intercellular spread and multinucleate giant cell formation. Membrane interaction facilitated by motility and T6SS-1 can also lead to cell death. The lifecycle model for the Burkholderias contrasts with that of Listeria and Shigella because it does not require engulfment of membrane protrusions with bacteria at their tips,
obviating the need for lysis of double-membrane vesicles for cell–cell spread. Source.

One more thing. These bacteria induce the fusion of adjacent cells into giant multinucleated syncytia. This way, the bugs do not have to go to the trouble of crossing two membranes in order to reach a new host cell. This situation does not last forever because, in time, the giant cells are destroyed. Involved here is a secretion system, Type VI (T6SS), which is widespread among Gram-negatives. The factors secreted by this particular T6SS participate in the fusion of the cells  and their killing. Cell fusion followed by killing propagates centrifugally, resulting in plaques in cell cultures comparable to those formed by lytic viruses.

The paper also probes another question—how to determine if virulence factors act at late stages of infection. Specifically, in the case of Burkholderia it has been known that a particular Type III secretion system (T3SSBsa) plays a key role early in infection. The question has arisen, does this system also come into play later on? The difficulty here is that infection by T3SSBsa mutants are defective in an early stage of pathogenesis, which makes it hard to determine if T3SSBsa also works later on. What to do? The authors employed  a new device, called the photothermal nanoblade, to introduce bacteria into the cytoplasm of a host cell. This gadget consists of a capillary coated with titanium. If placed next to a cell and subjected to a laser flash, the thermal excitation results in a nanometer-sized vapor bubble that makes a small, temporary incision in the cell membrane, allowing transfer of the capillary contents. The cargo thus delivered—ranging in size from molecules to bacteria—enters the cell without impairing its viability.

This is exciting stuff, and these researchers put it to good use. What they found out is that the T3SSBsa secretion machinery is only needed early in infection, specifically for the exit of the bacteria from their phagocytic vesicles. This clarifies details of one important step in the pathogenesis of Burkholderia. (We discussed this paper in a recent podcast of This Week in Microbiology. Click here for TWIM #12 with more of our thoughts about this work.)

The authors thus combined in one exciting paper the use of an ingenious technique to bypass early stages in pathogenesis in which mutants are defective. with the discovery  of a novel mechanism for how Burkholderia spreads between host cells. Slowly, but surely, the ways Burkholderia causes damage are beginning to be understood. Together with what is known about model organisms, such as Listeria , this will help elucidate the complex choreography of other intracellular pathogens. The repertoire of strategies such organisms employ to survive and thrive in host cells is impressive indeed. With this paper, it has become even more so.

Here is a video I like to show in class of Listeria "cruising" around inside of cells, including how the bacterium can move from one host cell to another: http://youtu.be/sF4BeU60yT8